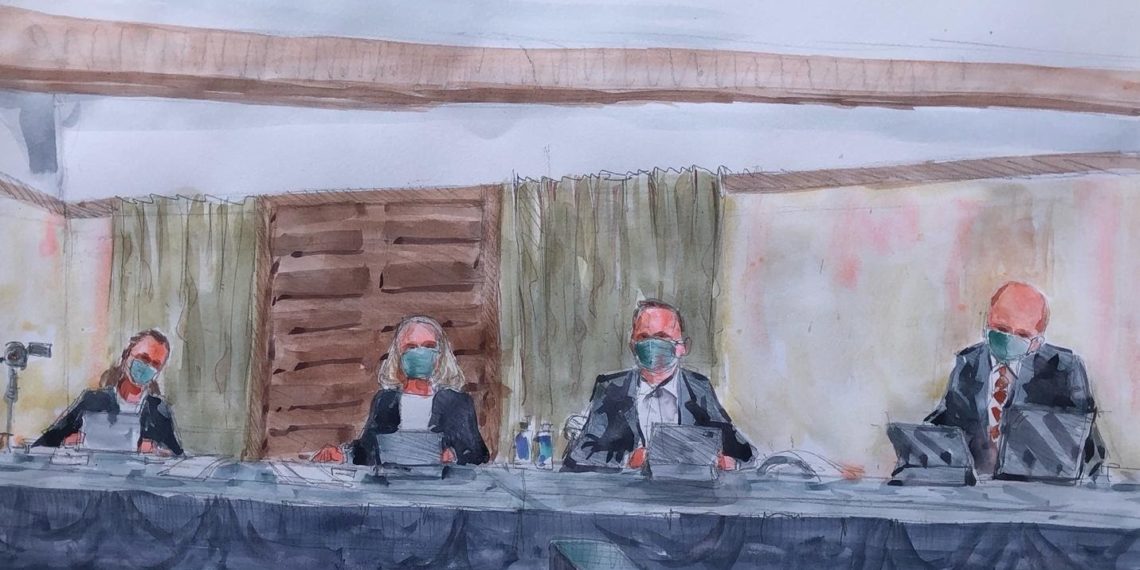 The panel of four Finnish judges listens to testimony in Liberia in the trial of Gibril Massaquoi. Leslie Lumeh/New Narratives.

“Massaquoi killed my wife and my mom, and he gashed one woman with a bayonet when she resisted going with him under the bridge."

The witness, now 47, detailed the crimes he said he witnessed near Waterside Bridge on the way from Bushrod Island into Monrovia.

“We were inside a shop near Waterside looking for food when I heard shooting sound, and the person called his name saying that ‘I am Gabriel Massaquoi’,” the witness told the four judge panel using one of the names witnesses say Massaquoi used during the war. “I saw him while in the shop and he had a pistol in his hand, and after that he ordered us to single file and we did. While in the line, he took two of my brothers under the bridge that was his base and killed them there.”

“I saw Massaquoi firing at the two brothers of mine under the bridge,” the man said. “Another incident of shooting took place near the bridge and we all escaped after my brothers had been killed.”

This was the second day of hearings in an undisclosed location in Liberia since the trial moved here from a district court in Tampere, Finland, where the trial is being prosecuted.

Mr Massaquoi, who was granted residency in Finland in return for testimony that helped convict former Liberian president, Charles Taylor, and others in the Special Court of Sierra Leone, is facing war crimes charges until the principle of “international jurisdiction” which holds that crimes committed against all of humanity can be prosecuted in any jurisdiction.

Mr Massaquoi has not been moved to Liberia and is watching the proceedings through video link.

The second witness, speaking confidently, told the court that Mr Massaquoi had soldiers with him, some with arms and some without.

“I saw him well and he said he was the commander,” the witness told the court. “I got to know his name because he was always calling his name as ‘Angel Gabriel Massaquoi’, and that’s how I heard his name and can still remember it today.”

The witness identified a rebel by the name of Gabriel Varney as controlling the line of people crossing the bridge while Mr Massaquoi was killing people under the bridge.

This witness, like a woman who testified on the first day, could not remember the exact year the events took place. “The one I can remember and talking about is the 2000 war where I experienced this thing,” he said.

The court has directed journalists to conceal the identity of all witnesses in the case to protect them from intimidation and retaliation. The location of the court and a separate location where journalists are watching the trial through video link is also being concealed.

Dates have become a key issue in this case. Witness two said he could only remember 2000 but defence lawyers point out that 2000 was before the fighting took place over Waterside Bridge.

It is also unclear which factions were fighting at the time of the alleged events. Wednesday’s witness said he believed ULIMO was fighting the forces of then-President Charles Taylor, with whom Mr Massaquoi’s RUF had a close relationship.

But by 2000, ULIMO and its offshoots, ULIMO-J and K, no longer existed. The faction fighting the government then was the Liberia United for Reconciliation and Democracy (LURD).

The witness could also not remember the peacekeeping group that came to maintain peace during the last phase of the war.

When the war escalated and government forces and rebels were shelling each other’s territories, the West African grouping ECOWAS sent a ceasefire-monitoring group known as ECOMIL before the later arrival of the United Nations Mission in Liberia (UNMIL).

The witness, like others who were used to the first West African peacekeeping group for a long time, said he remembered ECOMOG coming to intervene in the crisis.

The defence lawyer drilled the witness on inconsistencies between his answers to investigators in the case and his testimony in court.

“It has taken long time and I am not educated to remember all of those days and dates,” the witness said. “The only time I know is the year 2000. The mistakes I make here are because the time has gone too far for me to remember all of what you are asking for.”

“Since he (Massaquoi) was the commander and was boasting and killing people, I was able to know him among the many soldiers surrounding him at the time. He was not fat or huge, tall or short. He was of a medium size with light skin.”

The third witness, another male, told the court that Mr Massaquoi killed his wife and mother at the Waterside Bridge where they had gone to find food.

As the fighting wore on, shops emptied out and people in the city were starving. The witness said he and his family were living in West Point and had heard that people were finding food at a store across the bridge in Waterside.

After waiting for a long time for the women to return the witness said he decided to go in search of them. That was when he said he came upon Mr Massaquoi at the bridge.

The witness said Mr Massaquoi had directed the women and others on the bridge to line up in a single file and he was taking people out and killing them for what Mr Massaquoi decided were transgressions. The witness saw the bodies of two men lying under the bridge. And then his mother and wife were pulled out of line.

“Massaquoi killed my wife and my mom, and he gashed one woman with a bayonet when she resisted going with him under the bridge, though she finally went after receiving wounds from the bayonet,” the third witness said.

“He introduced himself as Angel Gabriel Massaquoi, and I saw him taking up a pistol to shoot, and it was when he shot the two boys I told you about.” There was an incident that soldiers from central Monrovia were coming towards us shooting, and that’s how we all ran from the place,” the witness said.

Like other witnesses, the third witness did not know which group was fighting government forces in 2000. He, like the second witness, said ULIMO was the group, but after being asked why ULIMO that was disbanded since 1996, he said government forces told them that they were fighting ULIMO, and as civilians they had no argument to make but to conclude that it was the case.

More witnesses are waiting to testify in the case with some expected to come from Lofa County where Mr Massaquoi is accused of committing some of the crimes.