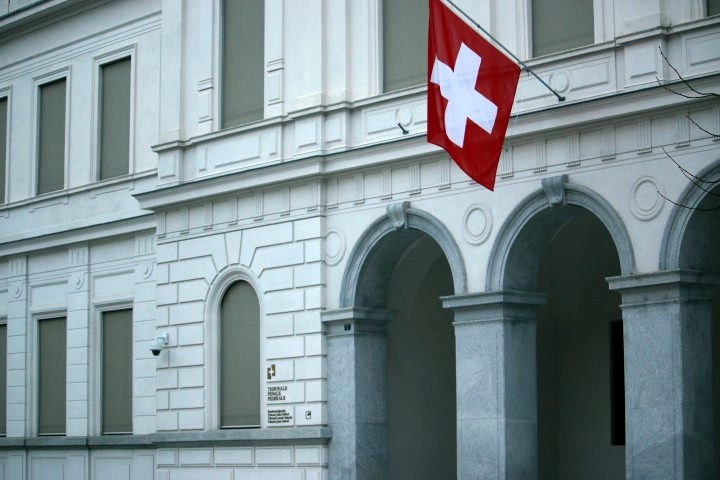 A Swiss flag is posted on the federal court in Bellinzona, Switzerland where Alieu Kosiah is being tried. FrontPage Africa/James Harding Giahyue

The victim is the second of seven alleged victims of Alieu Kosiah, who lodged complaints with Swiss authorities that spiked this historic war crimes trial.

BELLINZONA, Switzerland – A former fighter for the United Liberation Movement of Liberia for Democracy (ULIMO) told the Swiss Criminal Court Tuesday that Alieu Kosiah ordered the killing of people and forced civilians to transport looted goods long distances on foot.

The victim, the second of seven alleged victims who lodged the complaint with Swiss authorities that spiked this historic war crimes trial, told the court he was 21 when he witnessed the alleged crimes in 1993, first as a civilian and then as a rebel.

“Alieu Kosiah gave the order for them to kill us,” the alleged victim told the three-judge panel.

The alleged victims who brought the case are known as the “plaintiffs” in the trial. ULIMO soldiers rounded up the plaintiff, his two cousins and four other townsmen from their farms and villages. They were taken to Foya and tied with ropes to be executed.

“They burst the other man’s head with a big rock,” the plaintiff told the court. “I closed my eyes, and when I opened them, I did not see anyone again. I only saw blood.”

The plaintiff said he was dragged a good distance and stabbed in the back.

After his ordeal, the plaintiff said ULIMO forced him to join them, trained him in Bomi County, and brought him back to Foya to fight. As a rebel, he witnessed more atrocities committed under Kosiah’s command.

The plaintiff told the court he saw Kosiah and other commanders of ULIMO— Daykue, “Mammie Wata” and “Ugly Boy”— order the looting of the Foya powerhouse.

&The rebels placed parts of the powerhouse’s generator into an engineless truck along with palm oil, coffee and cocoa they had taken from villagers. They forced civilians to push it, and another broken-down van packed with looted goods, to Sorlomba, a six-hour walk to the Guinea border crossing. One ULIMO rebel shot and killed one of the civilians who said he was tired.

“Kosiah did nothing,” the plaintiff, now in his 50s, told the court during nine hours of testimony.

Kosiah, a former commander of ULIMO, is accused of ordering murders, recruiting a child soldier and theft among other crimes.

He is the first Liberian to be prosecuted for war crimes connected to the country’s civil war that left an estimated 250,000 people dead and a million displaced between 1989 and 2003.

Kosiah, 45, admits he was a high-ranking officer of ULIMO but denies any wrongdoing. He says he was not in Lofa when the alleged crimes occurred. Prosecutors are seeking a life sentence, the maximum penalty under Swiss law.

Tuesday’s hearing was marked by emotion on both sides as the plaintiff wept recalling the events from 1993. Kosiah’s frustration with the process was again on display.

The plaintiff wept as he narrated the murder of his third cousin on “Black Friday”.

The day became notorious in the Kissi area for the figthing that took place between militias. Kosiah broke the news to the victim that his cousin, who was a brother of the ULIMO commander “Mammie Wata”, had been killed in a gun battle with the Lofa Defense Force.

“He was like a guardian to me,” the plaintiff cried, fighting back tears with his face in his palms.

Dmitri Gianoli, Kosiah’s lawyer, quizzed the plaintiff about his memories of those events in an effort to cast doubt about his account. Gianoli asked the man on which hand Kosiah wore a glove. The plaintiff had told investigators in 2017 that Kosiah wore a glove on his right hand. But during Gianoli’s cross examination he said he could not remember.

The trial, the first war crimes trial outside of a military court in Switzerland, began in December after being postponed four times over the coronavirus pandemic. It is divided into two phases. The first phase featured Kosiah’s testimony and the second defence and alleged victims.

The plaintiff on Tuesday was the second. The court will hear from 17 more witnesses, including five alleged victims, eight prosecution witnesses, and four defence witnesses during the trial’s remaining weeks.

The proceedings continue tomorrow with the third of the seven victims, referred to in the Swiss legal system as “private plaintiffs.”