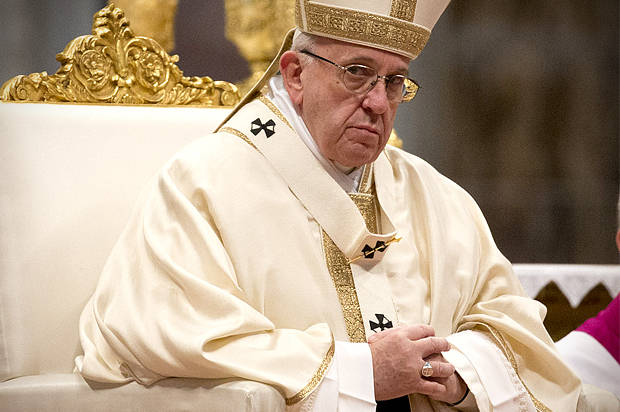 Pope Francis spoke of Saturday’s attack during his weekly general audience, held virtually from his library in the Vatican because of the Coronavirus pandemic.

Pope Francis on Wednesday condemned the killing of scores of farmers and villagers in Borno, northeast Nigeria by suspected Islamist militants as a `terroristic massacre’ that offended the name of God.
The Pope spoke of Saturday’s attack during his weekly general audience, held virtually from his library in the Vatican because of the Coronavirus pandemic.

“I want to assure my prayers for Nigeria, which unfortunately once again has been bloodied by a terroristic massacre,’’ Pope Francis said.

About 43 rice farmers were beheaded in the attack, which began on Saturday morning in the village of Zabarmari, in the Jere local government area of Borno state.

“May God welcome them into his peace and comfort their families, and may he convert the hearts of those who commit such horrors, which gravely offend His name,’’ Pope Francis said.

Boko Haram has since claimed responsibility for the attack that has attracted both local and international condemnation.

In his latest video released on Tuesday, which has now gone viral, Abubakar Shekau, leader of the sect, said 78 farmers were killed as against the 43 earlier reported.

Mr Shekau, who is wanted by the Nigerian government for the atrocities perpetrated by Boko Haram, claimed the farmers were killed for handing over one of their members to the Nigerian military.

Since Boko Haram began its insurgency in Borno State in 2009, before it spread to their parts of the northeast and beyond, the Islamic militants have killed at least 30,000 people while several, displaced from their ancestral communities, now live in decrepit internally displaced persons camps spread across the zone.

UBA clinches ‘Bank of the Year 2020’ award in six countries