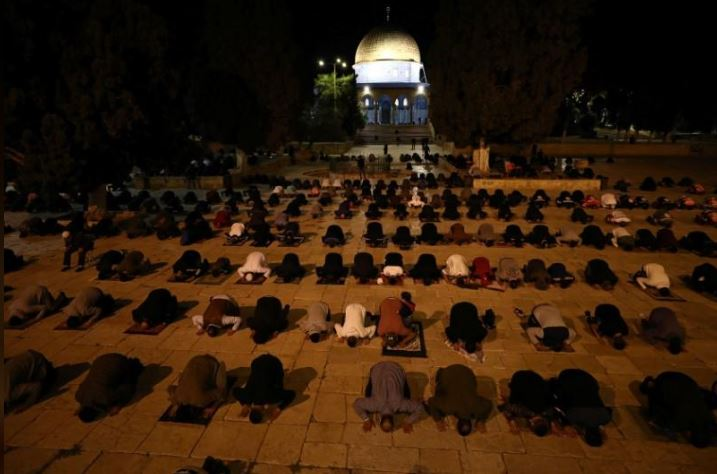 Worshippers pray in front of the Dome of the Rock in the compound known to Muslims as Noble Sanctuary and to Jews as Temple Mount in Jerusalem’s Old City, after it was reopened following a two-and-a-half-month coronavirus closure May 31, 2020 (Reuters photo)

Jerusalem’s Al-Aqsa mosque reopened to worshippers on Sunday after a two-and-a-half-month coronavirus closure, but Muslim authorities imposed some precautions as health officials warn of an uptick in local infections.

The resumption of prayers at Islam’s third-holiest site caps a sombre period for Jerusalem’s Muslims, who this year marked the holy fasting month of Ramadan and the Eid al-Fitri holiday without their usual daily visits to Al-Aqsa and the adjoining Dome of the Rock.

The Council of Islamic Waqf cited the slowed local spread of COVID-19 in lifting entry restrictions and reopening the compound’s iconic shrines, which shut on March 15.

Hundreds of Muslims chanted “God is the greatest” as they packed into the compound in Jerusalem’s walled Old City early on Sunday for dawn prayers, a Reuters witness said.

Some got on their knees and kissed the ground as they entered.

But Muslim authorities imposed some measures to reduce the risk of contagion, as new cases in Israel spiked in recent days.

Worshippers must wear face masks and bring personal prayer rugs should they wish to pray inside the shrines or on the compound’s outdoor grounds, the council said in a statement.

The council did not say if there would be a limit on the number of people allowed in the 35-acre compound, known to Muslims as the Noble Sanctuary and to Jews as the Temple Mount.

Around 700 worshippers were present on the compound for dawn prayers, the vast majority of whom wore face masks and brought prayer rugs.

Muslims believe the site to be where the Prophet Mohammad ascended to heaven.

Jews revere it as the site of the Jewish temples of antiquity.

There have been 17,000 coronavirus cases and 284 deaths in Israel, and 386 cases and three deaths in the occupied West Bank.

50 journalists to lose job to robots at Microsoft