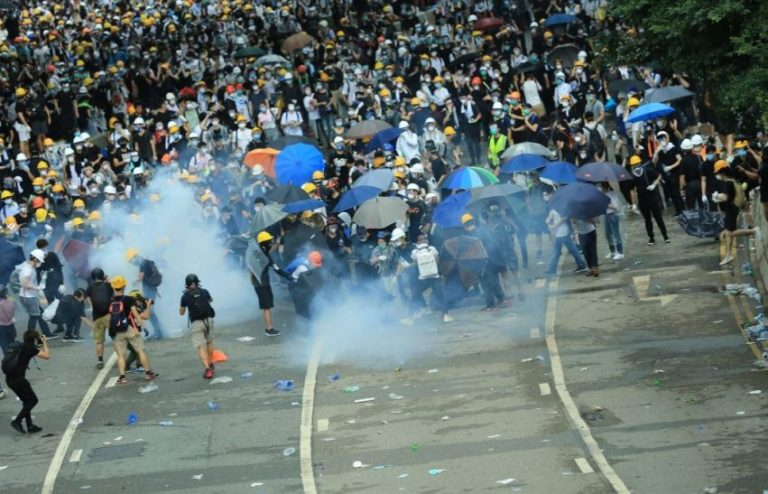 Police fired tear gas at protesters in one of Hong Kong’s busiest shopping districts on Sunday as growing numbers took to the street in opposition to Beijing’s plans to impose a national security law that bypasses the local legislature.

Water cannon and armoured trucks were deployed across the city before protests even kicked off, as police prepared for mass protests, the first of their kind since the city got COVID-19 under control.

While some protesters dug up bricks from walkways, scenes largely included dozens of riot police moving people on or blocking roads in line formations and determined to keep traffic moving for as long as possible.

The demonstrations are expected to intensify throughout the day.

The police issued two statements in quick succession, condemning protesters for turning up and flouting social distancing laws, after calls to gather were advertised online, despite not having the official go-ahead.

The police also appealed to the public to get out of the area and stay safe, as they undertake “enforcement actions against rioters’’.

Widespread outrage has engulfed the city as new laws concerning national security led the discussions on Friday at the National People’s Congress rubber-stamp parliament in Beijing.

Many Hong Kong citizens feel the new laws would infringe on the freedoms widely enjoyed by the semi-autonomous city as it would allow Chinese companies to set up security agencies.

Protesters, who can currently be arrested and fined for flouting social distancing laws and for illegal assembly, may also be charged with “local terrorism” under the new national security law if it is passed by Beijing.

International human rights organisations say the laws would mean the end of the “One Country, Two Systems” principle, the 1997 understanding implemented when Britain handed control of the city back to China, which left Hong Kong a degree of autonomy.

Both politicians have been embroiled in a political stalemate between pro-establishment and pro-democratic camps in the local parliament, amid ongoing anti-government protests.

Tensions came to a peak last week in the Legco when opposing sides battled it out during an election for Chair of the House Committee, which reviews bills.

Some pro-democracy legislators were carried out of the chamber by security guards during the hour-long debacle.

The coronavirus pandemic temporarily shut down protests, but now that there are no new COVID-19 cases in Hong Kong, some have accused the government of keeping social distancing measures in place to quash the return of protests.

A heavy police presence could be seen throughout the day on Sunday, with the Police stopping and searching individuals, while groups of riot police could be seen loading weaponry with tear gas canisters and rubber bullets.

The police came under fire during the protests last year for their use of tear gas as a dispersal weapon in densely populated areas.