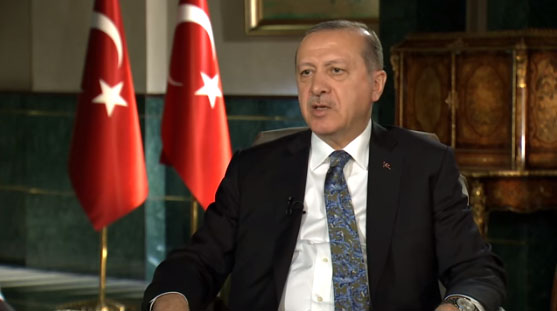 “Hey, Erdogan, the arrogant tyrant of Turkey, do not consider the swords of the caliphate’s soldiers are far away from you,” says one Turkish-speaking Islamic State militant, surrounded by two men holding machine guns.

Covering their faces, the militants swore allegiance to the group’s leader Abu Bakr al-Baghdadi throughout the video which features an Islamic State flag and a rocket launcher in the background.

“Know that standing along the ranks of the Crusaders will not help you against the soldiers of the caliphate,” the man says, referring to Erdogan.

The video comes less than three months after al-Baghdadi appeared in a video holding a folder with the name ‘Wilayat Turkey’ (Province of Turkey in Arabic) on it. The folder indicated at the time that the group was expected to carry out attacks and expand operations in Turkey.

The last major Islamic State attack in Turkey was a New Year’s attack in 2017, at an Istanbul nightclub that killed 39 people.

The group “will continue to fight until we make the religion of Allah dominant all over the world”, the man in the video concludes as he downplays US operations against the extremist network in Syria and Iraq.