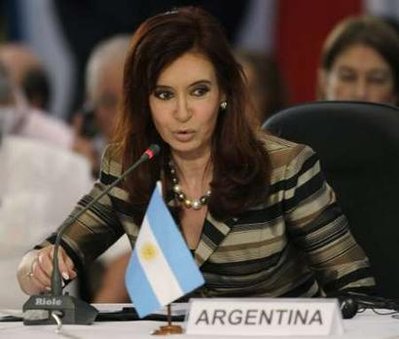 Argentine President, Cristina Fernandez, has thyroid cancer and will undergo surgery next month, her government said on Wednesday, adding that the cancerous cells had not spread.

Ms. Fernandez, 58, was elected to a second four-year term in October, vowing to deepen her unorthodox policies despite complaints from business leaders who say her heavy-handed management of the economy is stifling investment in the country.

President Fernandez was diagnosed with a papillary carcinoma that has not metastasized, said her spokesman, Alfredo Scoccimarro.

The operation is scheduled to take place on Jan. 4, and she is expected to take a leave of absence until Jan. 24.

“The thyroid gland will have to be removed. The prognosis is very good. The chances of being cured are 90 to 98 per cent,” said Buenos Aires-based cancer specialist Julio Moreno.

The cancer was detected last week during a routine check.  Papillary carcinoma is the most common type of thyroid cancer and normally affects people under the age of 40, especially women.

When Kirchner died, many thought it spelled the end of the couple’s idiosyncratic blend of state intervention, nationalist rhetoric and the championing of human rights in grains exporting powerhouse Argentina, the world’s No. 3 soyabean supplier.

But Fernandez pulled off a remarkable comeback on the back of a brisk economic expansion and an outpouring of public sympathy.

She was re-elected with 54 per cent of the vote, promising to stay true to her policies despite objections from Wall Street and international investors.

Latin America’s No. 3 economy is growing at nearly nine per cent a year, but a worsening global economic outlook combined with entrenched high inflation at home are seen reining in Argentina’s growth to about four per cent next year.

Ms. Fernandez is one of several Latin American leaders to have cancer, Venezuelan President, Hugo Chavez, underwent chemotherapy earlier this year while Paraguayan President Fernando Lugo’s lymphatic cancer is in remission while former Brazilian leader Luiz Inacio Lula da Silva is being successfully treated for a cancerous tumor on his Larynx, according to his doctors.