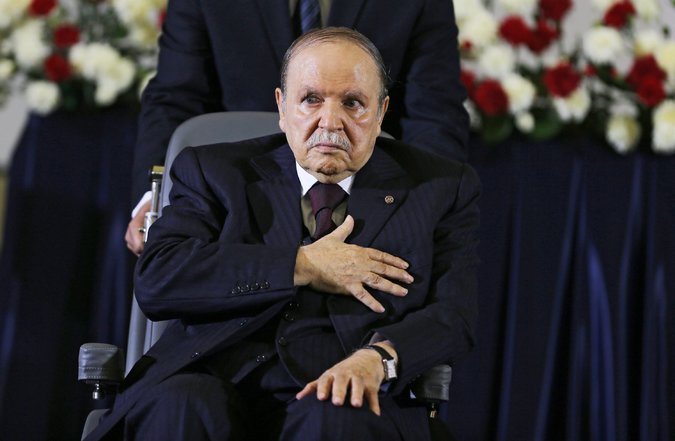 Hundreds of Algerians rallied in the capital Algiers on Friday to protest against ailing President Abdelaziz Bouteflika’s bid for a fifth term in office.

The demonstrators chanted pro-democracy slogans at the rally in the city’s May 1 Square amid a heavy police presence, witnesses said.

Security forces cordoned off the square and prevented other protesters from entering it, the witnesses added.

Earlier this month, Mr Bouteflika, who has ruled the North African country since 1999, announced his intention to seek a new five-year term in the elections scheduled for April 18.

The 81-year-old suffered a stroke in 2013 and is rarely seen in public.

The announcement was met with protests across the country.

“Algerians’ dignity has been infringed by the current president’s bid to rule Algeria for five more years in spite his ill health,” a protester said on Friday in the capital.

Other demonstrators chanted “No to the fifth term.”

No violence had been reported by mid-afternoon.

Similar protests took place in other provinces including Oran in north-western Algeria and Setif in the north east, Algerian newspaper Elkhabar reported online.

The rallies come in response to calls from online opposition activists.

Security forces were deployed in large numbers in Algiers early Friday in the run-up to the protests.

Main streets in the capital looked empty early Friday as helicopters were hovering in the sky, a witness said.

Internet service in Algeria overnight experienced a brief breakdown, which activists said was an attempt by authorities to hamper efforts to mobilise for Friday’s protests, a claim the government has denied.

Mr Bouteflika is the only president in North Africa, who was spared in the pro-democracy uprisings of the Arab Spring that started in neighbouring Tunisia in 2010.

At the time, his government contained pro-democracy protests with promises of reform and pay raises, financed by the country’s revenues from oil and gas.

In recent years, Algeria’s finances have been hurt by the global drop in oil prices, prompting cuts in state subsidies.