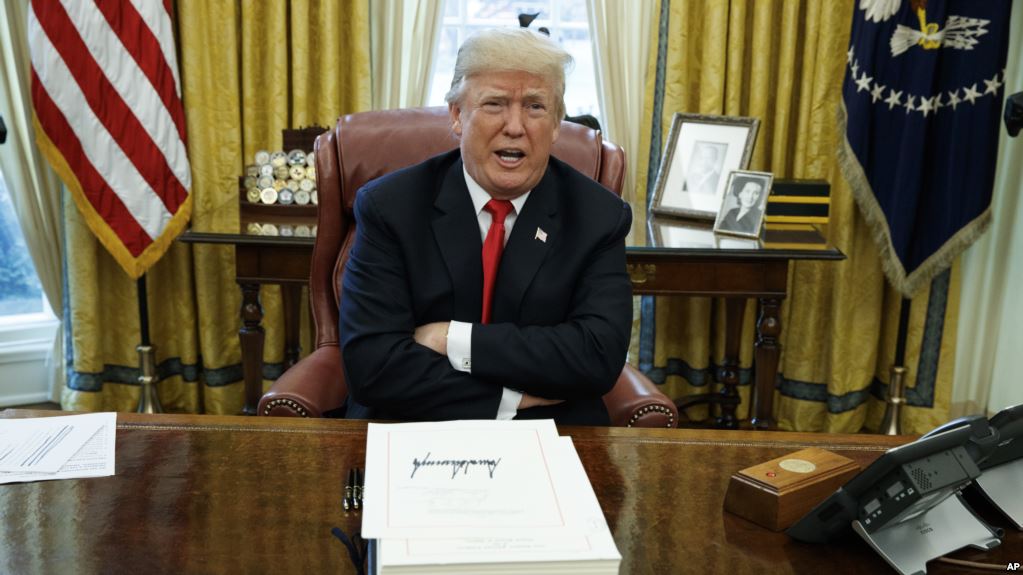 Trump in the Oval Office

The International Criminal Court (ICC) said on Tuesday it would “continue to do its work undeterred” a day after U.S. National Security Adviser John Bolton threatened sanctions if the tribunal investigated U.S. activities in Afghanistan.

The Hague-based court said in a statement it was an independent and impartial institution with the backing of 123 countries.

“The ICC, as a court of law, will continue to do its work undeterred, in accordance with those principles and the overarching idea of the rule of law,” the court said.

On Monday, the United States threatened to impose sanctions on ICC officials if they go ahead with an investigation into alleged war crimes committed by U.S. personnel in Afghanistan.

“For all intents and purposes, the ICC is already dead to us,” he told the conservative Federalist Society in Washington.

Mr Bolton also said that any probe into alleged war crimes committed by U.S. service members and intelligence professionals during the war in Afghanistan would be “an utterly unfounded, unjustifiable investigation.”

“If the court comes after us, Israel or other U.S. allies, we will not sit quietly,” he warned.

The U.S. national security adviser said Washington was prepared to slap financial sanctions and criminal charges on ICC officials if they proceed against any Americans.

“We will ban its judges and prosecutors from entering the United States. We will sanction their funds in the U.S. financial system, and we will prosecute them in the U.S. criminal system,” Mr Bolton said.

“We will do the same for any company or state that assists an ICC investigation of Americans,” he added.

An ICC prosecutor requested in November 2017 to open an investigation into alleged war crimes committed by the U.S. military in Afghanistan, especially over the abuse of detainees.

Mr Bolton said neither Afghanistan nor any other government party to the ICC’s Rome Statute has requested an investigation.

But he said the ICC could formally open the investigation “any day now.”

Mr Bolton also cited a recent move by Palestinian leaders to have Israeli officials prosecuted at the ICC for war crimes.

“The United States will use any means necessary to protect our citizens and those of our allies from unjust prosecution by this illegitimate court,” Mr Bolton said.

Earlier on September 10, Washington announced that it was closing the Palestine Liberation Organisation (PLO) mission in Washington, citing the Palestinians’ bid to take Israel to the ICC as one reason for the move.

State Department spokeswoman, Heath Nauert, said in a statement that the PLO had “refused to engage with the U.S. government with respect to peace efforts and otherwise.”

Under President George W. Bush, the United States did not ratify the Rome treaty that established the ICC in 2002.

The purpose of the court is to bring perpetrators of war crimes, crimes against humanity, and genocide to justice. (Reuters/NAN)