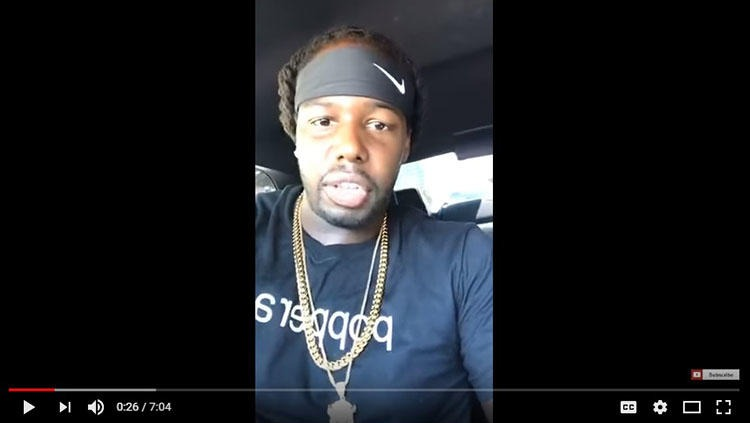 Independent music journalist and video blogger Zachary Stoner is shown in this screenshot from his YouTube channel, zacktv1.

The Committee to Protect Journalists today condemned the killing of independent music journalist Zachary Stoner, who was shot to death in the early hours of May 30 in Chicago, Illinois.

Mr. Stoner published videos to his YouTube channel zacktv1, which focused on community life and hip hop artists in his hometown of Chicago.

Mr. Stoner was driving his Jeep down Clark Street in the South Loop neighborhood in Chicago when unknown assailants in a second vehicle pulled alongside him and opened fire around 1:30 a.m. on May 30, news reports stated..

He was last seen alive a half hour earlier, when news stories, citing friends, reported he was leaving a rap concert at Refuge nightclub, three blocks away.

“Authorities should thoroughly investigate the murder of Zachary Stoner, including whether his journalistic work was the motive for his death,” said Alexandra Ellerbeck, CPJ’s programme coordinator for North America.

Mr. Stoner, 30, was struck in the neck and head, causing him to drive onto a curb and crash into a light pole. A video taken immediately following the shooting by a neighbour, Aaron Dunlap, shows at least three people running to a third vehicle; one can be heard shouting, “Let’s go!”

Mr. Stoner was taken to Northwestern Memorial Hospital in critical condition, but was declared dead at 4:20 a.m. on May 30, according to  a log  from the Cook County Medical Examiner’s Office.

Having referred to himself as “the best interviewer in the world” in his Twitter profile, Mr. Stoner went by ZackTV and was a popular vlogger–or video blogger–known for his coverage of hip hop and the realities of life in his community, particularly those of young black men.

The Chicago Defender quoted Stoner as saying, “A lot of people respect what I do. I’m the ‘Hood CNN.'”

The videographer interviewed notable rappers including Chief Keef and G Count, and had posted more than 1,700 videos to his channel, which had a following of over 176,000 people. Some of his videos were controversial–a few mention conspiracy theories, and others feature young men throwing gang signs and threatening their rivals.

Mr. Stoner was also known as a peacemaker, reported the Sun Times, due to his reputation for interviewing leaders of opposing gangs and organizations and seeking out opportunities to help them settle their differences.

Lamarr Stoner, a cousin of Zack Stoner, who lives in Chicago, told CPJ, “[Stoner] was going to different hoods, talking to rappers in places the media can’t go, filming and recording, and making sure the word got out on the street and around the world about what was going on.”

In April 2018, journalist Charles  Preston wrote in the Chicago Defender, “Stoner documents what others neglect,” giving “the city’s most controversial artists their first on-camera interviews and cover[ing] neighborhoods where news reporters keep their news trucks running.”

A friend of Mr. Stoner, Phor Robinson, was quoted by WGN TV  as saying, “I’m hearing stories like they may have been mad at him because he did interviews with certain rappers. But that’s not his fault for him doing his job.”

Morgan Elise Johnson, co-founder and creative director of the Chicago-based publication The Triibe, met with Mr. Stoner and his business partner, Tony Woods, a month before Mr. Stoner’s death to discuss a potential partnership.

Ms. Johnson told CPJ, “His voice was so powerful in the hood, and I don’t know if that power had something to do with his death.”

Mr. Stoner had also received threats connected to his coverage of the death of a teenage girl, Kenneka Jenkins, in September 2017. While her death was ultimately r ruled an accident, it sparked a social media frenzy and numerous conspiracy theories.

In October 2017, an anonymous woman  called Mr. Stoner, warning him to “leave the case alone… leave it alone for your safety.”

In a video, Mr. Stoner reported that he would not post interviews related to the case because his house had been broken into, his camera gear stolen, and he was receiving threatening phone calls and emails. Almost two months later, however, he did publish the videos.

Detectives from the Chicago Police Department are still investigating Mr. Stoner’s murder, a spokesperson told CPJ, and are reviewing possible pod-camera footage of the incident. Officer Norma Pelayo, a department spokesperson, told CPJ that no suspects are in custody.

Killings of journalists in the United States are relatively rare. At least seven journalists have been killed in the country in direct relation to their work since CPJ began documenting cases in 1992.

CPJ reported in 1994 on several unsolved murders of American immigrant journalists in the 1980s and 1990s.