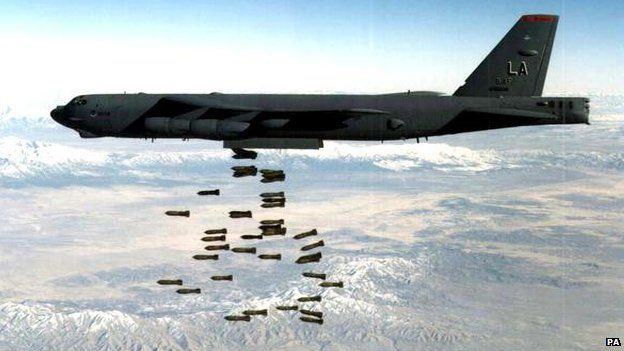 B52 bomber to illustrate the story. [Photo credit: BBC.com]

U.S. drops record number of bombs and ammunition in Afghanistan

In September, the U.S. Air Force dropped the highest number of bombs and other ammunition on Islamist groups in Afghanistan since 2012, according to the latest official figures on Tuesday.

The U.S. Air force dropped a total of 751 munitions on Taliban and Islamic State positions, a 50 per cent jump compared to August.

“This increase can be attributed to the president’s strategy to more proactively target extremist groups.

“In order to increase the number of airstrikes, another six F-16 fighter jets were stationed in the largest U.S. base in Afghanistan, Bagram near Kabul,’’ the report said.

It added that B-52 bombers were allowed to fly more missions.

The significant increase in activity came after the Trump administration’s announcement of a new U.S. strategy and a moderate increase of troops in the war-torn country.

Along with more airstrikes, civilian casualties are also on the rise.

The UN recorded a 43-per-cent increase in civilian casualties from aerial operations during the first six months of 2017 compared to the same period in 2016, documenting 232 civilian dead or injured.

Eighty-five casualties could be attributed to U.S. airstrikes, 114 to Afghan airstrikes, with other incidents remaining unclear as to who had been responsible.