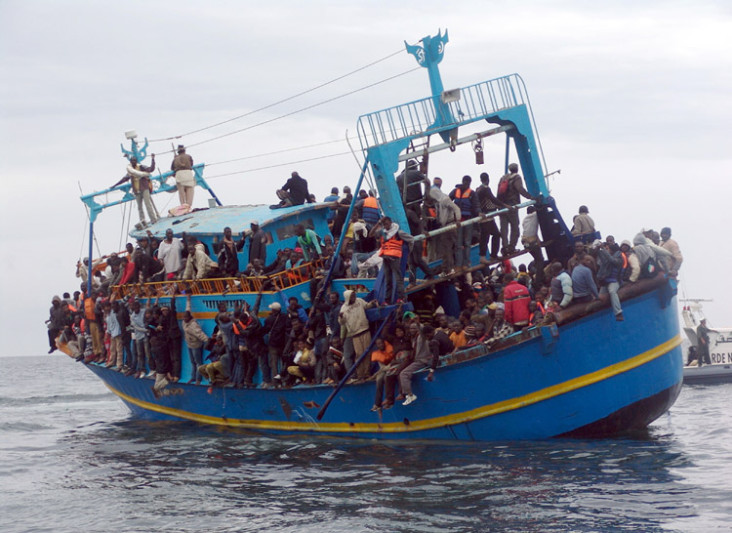 African migrants stranded on a boat coming from Libya wait for rescue services, near Sfax, on the Tunisian coast, on June 4, 2011. Between 200 and 270 migrants fleeing the conflict in neighbouring Libya went missing on June 2 off of Tunisia, while nearly 600 others were rescued alive after their boat capsized. AFP PHOTO / HAFIDH (Photo credit should read HAFIDH/AFP)

The Italian coast guards said in Rome on Sunday that more than 4,200 migrants trying to reach Europe have been rescued from boats in the Mediterranean in the last 24 hours.

The guards said a total of 4,243 people have been saved from fishing boats and rubber dinghies in 22 operations involving ships from nations including Italy, Ireland, Germany, Belgium and Britain.

They said on Friday that the Italian navy recovered 17 dead bodies on one of the boats off Libya.

They added that the details on the circumstances surrounding their deaths and their nationalities have not yet been released.

The coast guards said the bodies and other 200 survivors have been brought to the port of Augusta in eastern Sicily aboard the Italian navy corvette Fenice late on Saturday.

They said migrants escaping war and poverty in Africa and the Middle East this year have been pouring into Italy, which had been bearing the brunt of Mediterranean rescue operations.

They said last month, more than 800 migrants drowned off Libya, in the Mediterranean’s most deadly shipwreck in living memory, when their 20-metre long fishing boat capsized and sank.

The coast guard said the incident spurred the European Union to agree on a naval mission to target gangs smuggling migrants from Libya.

Meanwhile, a broader plan to deal with the influx was in doubt due to a dispute, over national quotas for housing asylum seekers.

The EU plan to disperse 40,000 migrants from Italy and Greece to other countries met with resistance this week, with Britain saying it would not participate and some eastern countries calling for a voluntary scheme.

The UN refugee agency, said more than 35,500 migrants arrived in Italy from the beginning of the year up to the first week of May.

It noted that the number has swelled considerably since, while over 1,800 are either dead or missing.

The agency said most of those rescued on Friday and Saturday are expected to reach ports around southern Italy during the weekend.

It said the British naval vessel HMS Bulwark, offloaded more than 740 early on Saturday at the southeastern Italian port of Taranto.

It added that more than 200 migrants, arrived at the Calabrian port of Crotone in south-west Italy, on board the Belgian navy ship Godetia.