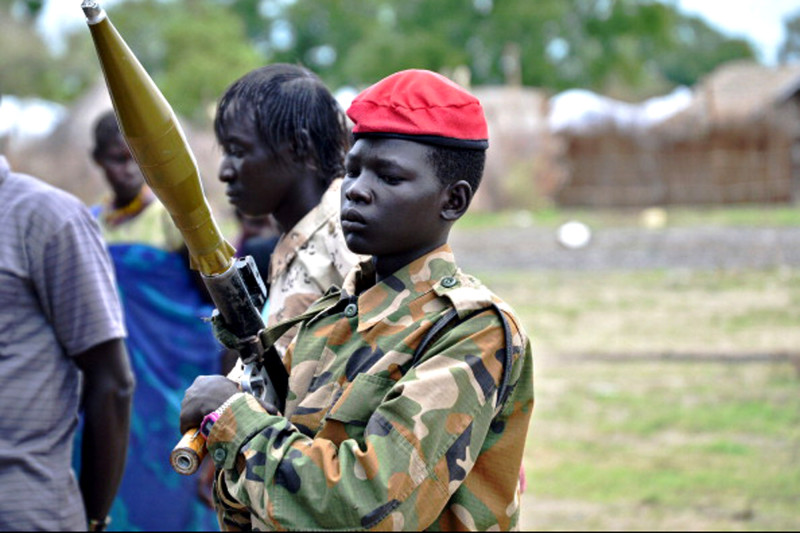 A young member of the South Sudan Democratic Movement/Army (SSDM/A) faction stands in Gumuruk on May 13, 2014. The faction's leader, David Yau Yau signed a final peace deal with the South Sudanese government on May 9, 2014 in the Ethiopian capital, Addis Ababa. Mediators who brokered South Sudan's fragile ceasefire called on May 13 for the warring sides to abide by the deal, with bloodshed showing no sign of stopping despite promises made on paper. Fighting broke out soon after dawn on May 11, a day after the ceasefire was signed by President Salva Kiir and rebel chief Riek Machar, the second time in the five-month conflict that a truce has failed to stick. AFP PHOTO/SAMIR BOLAFP PHOTO/ SAMIR BOL (Photo credit should read SAMIR BOL/AFP/Getty Images)

The United Nations Children’s Fund, UNICEF, said on Tuesday in Bangui that it had secured the release of 3,000 child soldiers in South Sudan.

It said more than 12,000 children are believed to have been recruited to fight over the past year.

UNICEF said the 3,000 child soldiers who are in the process of being released were recruited by David Yau Yau, an independent warlord who signed a peace deal with the government in May.

It said an initial group of 280 children aged between 11 and 19 was released Tuesday in Gumuruk, in the east of South Sudan.

UNICEF said it was trying to reunify the children with their families.

Meanwhile, the Human rights activists said the children have been recruited by the South Sudanese army, as well as rebels and other armed groups involved in the conflict.