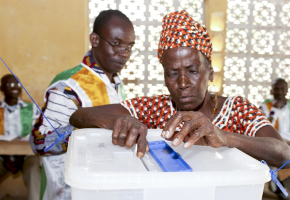 Africa: Key Findings of the 2014 Ibrahim Index of African Governance

An excerpt from a Mo Ibrahim Foundation briefing on key findings of the 2014 Ibrahim Index of African Governance. The full briefing, including graphs and findings relating to the four categories on which the index is based, can be found here:

– At the continental level, average overall governance performance has registered a slight improvement (+0.9 score points) over the last five years.

– However, progress appears slightly smaller than over the previous five years, during which the continental average overall governance score increased by +1.2 score points.

– During the most recent five-year period, 39 out of 52 countries registered an improvement of between +0.1 and +7.8 score points.

– Four of the 39 countries, which all sit in the bottom half of the ranking table, have improved at the overall governance level by more than +5.0 points during this five-year period: Côte d’Ivoire (40th), Guinea (42nd), Niger (29th) and Zimbabwe (46th).

– Over the past five years, only Eritrea and Guinea-Bissau have deteriorated in overall governance and all four categories.

– Every African country has shown a decline in at least one sub-category over the past five years.

– Two countries, CAR (51st) and Guinea-Bissau (48th), sit in the bottom five rankings for overall governance and are also in the five most deteriorated countries on the continent.

– Over the past five years two countries have moved out of the bottom ten, Guinea (42nd) and Côte d’Ivoire (40th), and have been replaced by Libya (43rd) and Angola (44th).

– Egypt and Libya have both plummeted more than ten ranks over the last five-year period at the overall governance level.

These historically strong countries, positioned in the top five since the first data year of the 2014 IIAG (2000), remain in the top five, and show improvement at the overall governance level over the past five years.
However, each of them deteriorated in at least one category in the most recent five-year period and the previous five-year period.

Africa: What Africa is Contributing to Ebola Fight – Dlamini-Zuma