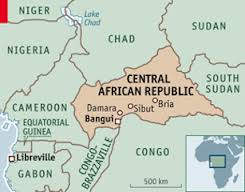 CAR has been in turmoil since Seleka overthrew President Francois Bozize, a Christian, in March 2013.

Thousands of people have been killed and about a million displaced due to the ethno-religious conflict.

About 2,000 French, 6,500 African and 800 European forces are battling to contain the violence in the former French colony.