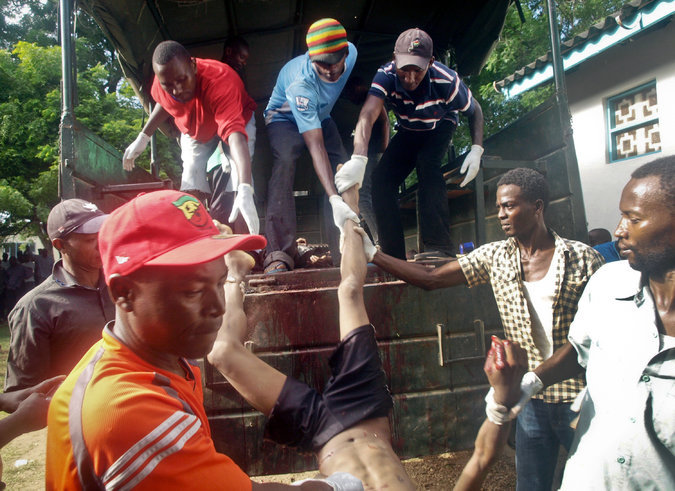 “We can confirm 48 deaths and three more injured who have been evacuated and rushed to hospital”.

A humanitarian agency confirmed on Monday in Mombasa that the death toll from the Sunday night attack in Kenya’s eastern coastal town of Mpeketoni has risen to 48.

The External Relations Officer of the Kenya Red Cross Society, Wariko Waita, said all those killed in the attack were men and had gunshots on them.

He said three more injured victims were rushed to hospital for treatment.

“We can confirm 48 deaths and three more injured who have been evacuated and rushed to hospital,’’ he said.

“The attack took place while people were at different places and we are trying to trace the missing persons from the scene,” he added.

Mr. Waita said there was massive destruction of infrastructure in the area, while several buildings, including restaurants, hotels, banks and government offices were torched during the attack.

A survivor, who preferred anonymity, said the attack started at around 8:00 p.m. local time, when about 50 heavily armed attackers with explosives stormed the busy eastern coastal town in vehicles, spraying bullets on the residents.

He said that Mpeketoni was now like a ghost town as many residents were still not back home after they took cover last night in the bushes.

The Police Spokesman, Masoud Mwinyi, expressed fears that the death toll could further rise since the attack occurred while bars and cafes were packed with fans watching the FIFA World Cup on television.

“More bodies have been recovered and right now we are talking about 48 dead persons and all the dead are men, with no women or children, and this fairly complicates matters,” he said.

Lamu County Police Commander, Leonard Omollo, said the attackers shot indiscriminately to residents and security forces were hunting them down.

“It is premature to blame any group, adding that police are conducting intelligence gathering to know those behind it,” he said.

The attackers were suspected to be Al-Shabaab fighters. The group and its sympathisers are responsible for several attacks against the police and other targets in Kenya.

But on Monday, it denied responsibility for the latest attack.