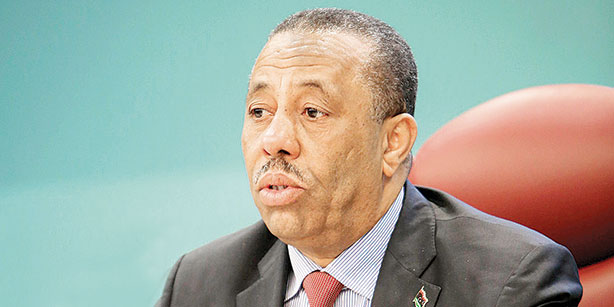 The prime minister was appointed only a month ago.

Libya’s newly appointed Prime Minister Abdullah al-Thinni resigned Sunday barely a month after taking office, citing a violent attack by militants on him and his family.

Mr. al-Thinni was confirmed as prime minister only last week. His appointment followed the removal of the Ali Zeidan early March by the parliament over an embarrassing crude oil row involving militants.

A statement released by the prime minister said he and his family were victims of a “traitorous attack” and although “no one was injured in the attack, but it was very close.”

He said he could not “accept to see any violence because of my position” but that he would act in a caretaker capacity until a new prime minister is appointed.

Details of the attack remain sketchy and it is not clear who was behind it, but it appears to have been carried out on the road to the airport in Tripoli, the BBC reported.

The Libyan cabinet has been in a state of dysfunction since the sacking of former Prime Minister Ali Zeidan early March.

Mr. Zeidan was dismissed for failing to stop rebels from exporting the country’s oil.

The lawmakers passed a vote of no confidence on Mr. Zeidan after a North Korean-flagged tanker laden with oil from a rebel-held port, broke through a naval blockade.

Libya had earlier threatened to bomb the vessel. It was intercepted by the navy on Sunday, but managed to slip into international waters a day later.

Abdullah al-Thinni, who was the defence minister then, was named interim prime minister on Tuesday.

The vessel was the first to have loaded oil from the rebel-held eastern Libya, where separatists are seeking greater control of resources since August.

They are also seeking autonomy for eastern Libya.

The oil tanker was reported to have taken on at least 234,000 barrels of crude oil at the Sidra terminal.

The tanker was eventually raided by the US elite force, Navy Seal 6, and the tanker with its content returned to the Libyan authorities.

Is God The Author of Evil, By Femi Fani-Kayode