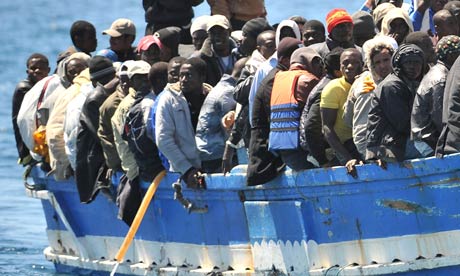 The EU President, Herman Van Rompuy, stressed the need for Europe and Africa to come together and face the challenges of youth unemployment.

European and African leaders on Thursday pledged to work together to fight human trafficking and illegal migration by improving the economic, social and security conditions on the continent.

They agreed that this was aimed at convincing young Africans that they have a better future at home.

At the end of a two-day EU-Africa summit in Brussels, 59 heads of state and government from both sides of the Mediterranean agreed that development and migration were inextricably linked.

Nkosazana Dlamini-Zuma, African Union Commission Chairwoman, said that Africa has many young people who die in the desert or crossing the Mediterranean, who were not skilled and were trying to find greener pastures in Europe.

She said that if the leaders concentrated on skilling its youths and investing in them, they would not have chosen to come through Lampedusa, rather they would come through the airports and the ports and be welcomed.

She was referring to an Italian island swamped by African migrants trying to reach Europe.

`Investing in people, prosperity and peace” was the theme of the summit at which European and African leaders spoke of a changing relationship, more focused on trade than aid.

The EU President, Herman Van Rompuy, stressed the need for Europe and Africa to come together and face the challenges of youth unemployment.

He said that Europe was anxious to cement its position as chief trading partner of a young continent that boasts enviable growth rates, second only to Asia.

Angela Merkel, German Chancellor called for a focus on the opportunities presented by Africa, and not always just the problems.

The UN Secretary General Ban Ki-moon, said that countries have a duty to deliver after years of promises, warning them not to lose sight of climate change as new crises arise.

“This Ukraine situation, Central African Republic, South Sudan and all these burning fires may be very serious and imminent, but we have to think about the global agenda,” he said.

The meeting is to be followed by a UN climate conference in Lima at the end of this year.

Another “baby factory” uncovered in Ogun