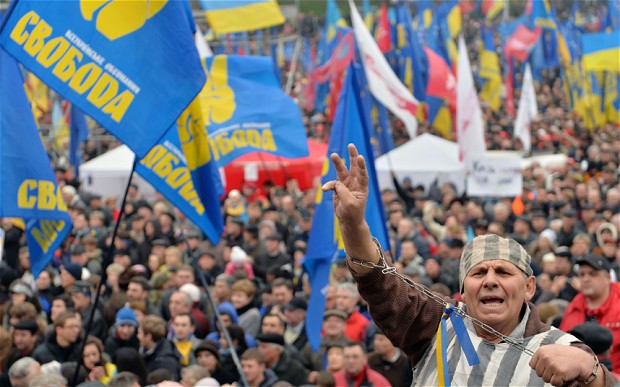 Nigeria and 12 other countries on Saturday voted for a UN Security Council resolution that would have asked countries not to recognise Sunday’s referendum in Ukraine’s Crimea region.

However, the resolution failed as it was vetoed by Russia, a veto wielding member of the Security Council, while China, another world power, abstained.

The resolution was drafted by the U.S. and supported by the European country members of the 15-member council.

It declared that a planned referendum on the status of Ukraine’s Crimea region had no validity, and urged nations and international organisations not to recognise it.

In her explanation after the vote in New York, Nigeria’s Permanent Representative to the UN, Joy Ogwu, warned of the consequences of the referendum, which would transfer control of the Crimea region from Ukraine to Russia.

A statement e-mailed to the News Agency of Nigeria (NAN) in Abuja, Ms. Ogwu said Nigeria voted in favour of the draft resolution because it reflected the principles embodied in the UN charter.

“The UN charter obliges all states to refrain in their international relations from the threat or use of force against the territorial integrity or political independence of any member state.

“The UN charter also obliges states to settle their disputes through peaceful means, all through the crisis in Ukraine.

“Nigeria has consistently and unequivocally called on all concerned to abide by these principles in the interest of international peace and security,” she said.

Ms. Ogwu said the resolution, which is not country-specific, underscored universally agreed principles and the sanctity of international law mentioned in the 1994 Budapest memorandum.

She noted that the memorandum provided a framework within which the crisis could be peacefully resolved.

“We have consistently called for dialogue, mediation, restraint and an end to hostile rhetoric.

“Therefore, Nigeria is fundamentally opposed to threat of use of force in settling international dispute.

“The lessons of history are not far-fetched and we are concerned that the mistakes of history must not be repeated by those alive today.

“Nigeria has consistently advocated mediation and peaceful settlement of disputes, including territorial disputes.

“Our willing submission to the ruling of the ICJ in our dispute with the republic of the Cameroon should serve as a beacon and inspiration to law-abiding nations.

“Nigeria is vehemently opposed to unilateral secession or forceful excision of territory designed to alter the configuration of states in their internationally recognised boundaries.

“Standing on these fundamental principles, Nigeria is opposed to any unilateral declaration by a component part of a state that will alter the configuration of a state to which it appropriately belongs’’.

Ms. Ogwu warned that the impending referendum in Crimea was not in consonance with the constitution of Ukraine, saying “the consequences of any defiance is better imagined than described’’.

Russia which has sent its forces to the Crimea is backing Sunday’s referendum, which would transfer control of the region from Ukraine to Russia.

Ukraine’s troubles began in November when President Viktor Yanukovych backed out of a trade deal with the European Union (EU) in favour of closer ties and economic aid from Russia.

The move triggered weeks of demonstrations in Kiev and elsewhere in Ukraine and forced Yanukovych to flee the capital to Russia in late February.

Article of Faith: Dreaming Dreams of the Almighty (2), By Femi Aribisala