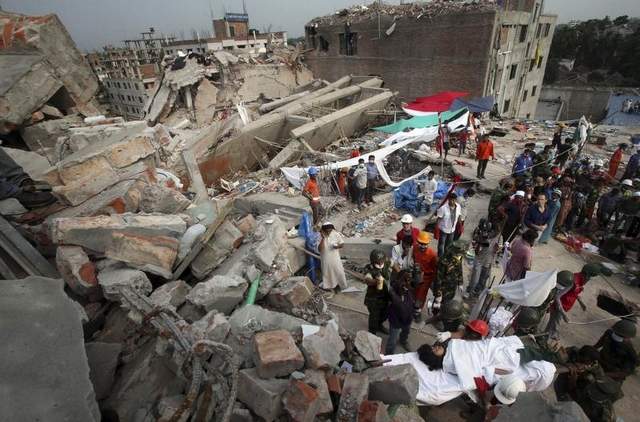 The numbers are expected to climb.

More than 600 bodies have been recovered from the ruins of a Bangladeshi garment factory building that collapsed over a week ago.

Police said Sunday evening that the death toll had reached 610. More than 200 bodies have been recovered since Wednesday, when authorities said only 149 people had been listed as missing.

Dozens more bodies were retrieved from the ruined eight-storey Rana Plaza on Sunday.

A preliminary government investigation said this week vibrations from four generators on the upper floors triggered the collapse.

The report also states that the building was constructed with weak materials, such as sub-standard steel rods which meant it could not withstand the vibrations.

The stench of decomposing bodies remains amid the broken concrete of the eight-story Rana Plaza building, and more bodies are expected to be pulled as heavy machines work to clear the rubbles.

The April 24 disaster is likely the worst garment-factory accident ever, and there have been few industrial accidents of any kind with a higher death toll.

It surpassed long-ago garment-industry disasters such as New York’s Triangle Shirtwaist factory fire, which killed 146 workers in 1911, and more recent tragedies such as a 2012 fire that killed about 260 people in Pakistan and one in Bangladesh that same year that killed 112.

An architect whose firm designed the building said Sunday that it had not been designed to handle heavy industrial equipment, let alone the three floors that were later illegally added.

The building developed cracks a day before the collapse and the owner, Mohammed Sohel Rana, called engineer Abdur Razzak Khan to inspect it. Khan appeared on television that night and said he told Rana the building should be evacuated.

Police also issued an evacuation order, but witnesses say that hours before the collapse, Rana told people that the building was safe and garment factory managers told their workers to go inside.

Rana has been arrested is expected to be charged with negligence, illegal construction and forcing workers to join work, crimes punishable by a maximum of seven years in jail. Authorities have not said if more serious crimes will be added.

Khan was arrested as well. Police said he worked as a consultant to Rana when the three illegal floors were added.