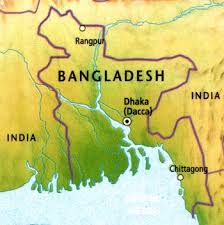 Fire breaks out at collapsed factory in Bangladesh

More than 2,000 have been rescued. Hundreds are still unaccounted for.

A fire broke out in a collapsed factory building in Bangladesh’s capital Dhaka, late Sunday, impeding efforts to reach remaining survivors of a disaster that has killed 377 people.

The fire, which came four days after the collapse, was reportedly started by sparks from cutters being used to remove wreckage with smoke pouring from the piles of ruined concrete.

Four fire-fighters were been taken to hospital. The fire occurred as rescuers were trying to free a woman they found trapped in the rubble. It wasn’t immediately clear what happened to the trapped woman.

Earlier, two people were pulled out alive and the owner of the Rana Plaza factory, Mohammed Sohel Rana, was earlier arrested near the Indian border. He has been flown back to Dhaka.

Mohammed Sohel Rana was arrested in Benapole in western Bangladesh, just as he was about to flee into India’s West Bengal state, said Jahangir Kabir Nanak, junior minister for local government. He faces charges of negligence.

The building in Savar, on the outskirts of Dhaka, was a garment factory and the presence of clothing may have worsened the blaze, correspondents say.

Authorities said they were deploying heavy machineries like crane to help pull off the rubble as the hopes fade for those still missing.

The death toll is expected to rise. About 3000 thousand people were said to have been in the building when it collapsed.

More than 2,000 have been rescued. Hundreds are still unaccounted for.