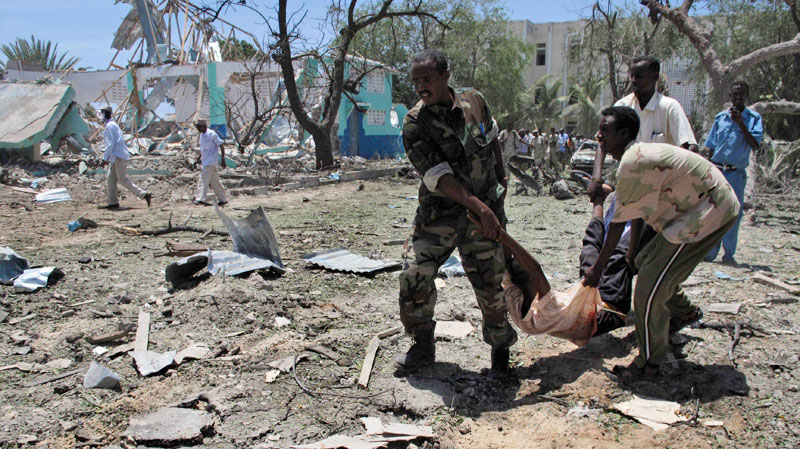 At least 20 people were killed in the Somali capital Mogadishu on Sunday in multiple bomb and gun attacks by al Qaeda-linked militants and al Shabaab fighters.

Gunmen set off explosions in the city’s court buildings, and opened fire killing about 16 people. Four more people were killed by a car bomb explosion near an African Union and Turkish Red Crescent convoy on the road to the airport killing two Turkish aid workers, the attacker and one more person.

Security forces then arrived and battled the fighters inside. They managed to rescue the Supreme Court chairman and other officials, some of whom climbed out of buildings using ladders.

“We assigned five special mujahideen for the court – four of them entered and killed the people inside. The other mujahid with his car bomb exploded when government soldiers gathered at the gate.”

Hours after the shooting stopped, government forces said they believed some fighters were still hiding inside.

Ugandan troops, part of the African Union force stationed in the capital, arrived at the scene shortly after the shooting started.

But the Somali government said later that nine gunmen had been involved in the assault, and all had been killed. Six of them detonated suicide vests, it said. Al-Shabab said six of its fighters had been killed.

Some of the bodies around the court compound were in uniform, but it was not clear how many of them were government soldiers, attackers, or civilians.

For more than a year, security in the coastal capital, Mogadishu, has improved since al Shabaab, Somalia’s main Islamist extremist group, fled the city after an AU and Somali government military offensive in August 2011.

But threats from al Shabaab have persisted.