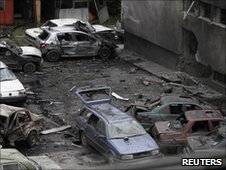 A bomb blast destroyed a monument to fallen soldiers of Bosnia‘s Muslim-dominated wartime army on Monday in the southern town of Mostar.

In Mostar, divisions between ethnic Croats and Muslims still run deep after the country’s civil war.

Police said an “explosive device” had destroyed the lily-shaped monument in front of Mostar’s City Hall in the early hours of Monday morning.

Bosnia’s international peace overseer, Valentin Inzko, said he was “appalled” by the attack and appealed for calm.

“This violence must not be allowed to spread,” Mr. Inzko said in a statement.

Inspite of Western efforts to encourage reintegration, the town remains largely divided between Bosnian Muslims (Bosniaks) on the east bank of the Neretva River and Croats on the west, where the city hall is located.

No one was injured in the explosion.

“Police are investigating the circumstances and hope to locate the perpetrator soon,” Srecko Bosnjak, spokesman for the Mostar police, said.

The monument to the Bosnian army was built last year, next to a memorial in honour of Croat veterans of the conflict.

Post-war violence in Mostar has been largely confined to clashes between rival football fans, but political leaders continue to resist the efforts of Western overseers to unify the town.

Each community has its own utility services, electricity provider and education system.

Ethnic politicking has paralysed the town more than once, and in October last year Mostar was the only town in Bosnia where local elections were postponed due to a dispute over how to hold the vote.