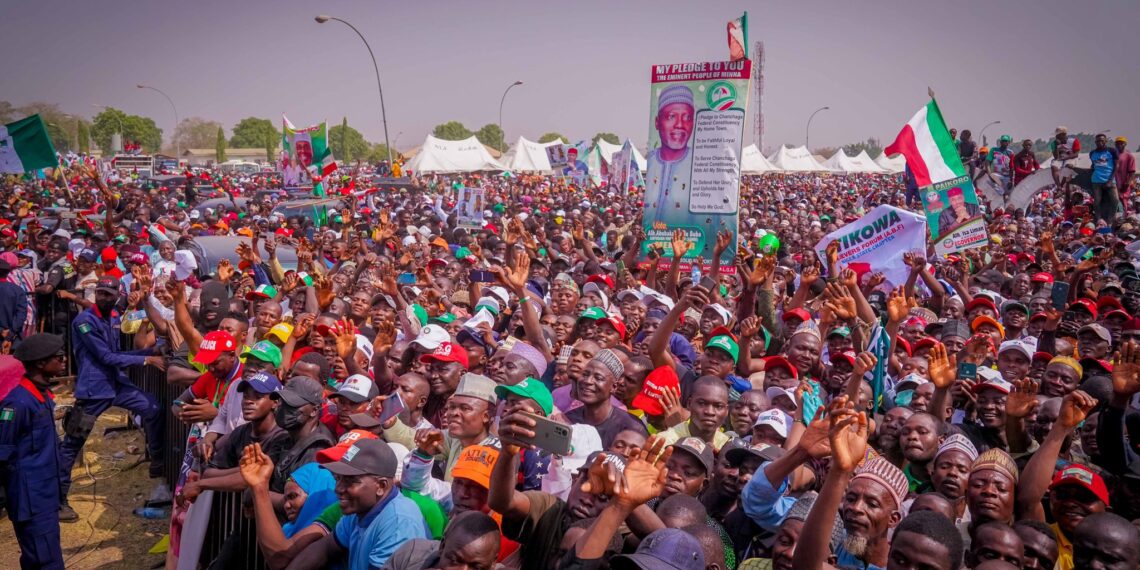 In previewing this race, some analysts had flashed back to the 1979 election which nearly went into a runoff. But the rallies are leading us to a different conclusion.

The major candidates in the presidential race have ramped up their campaigns since we entered the election year. However, pictures emerging from their rallies across Nigeria appear to invalidate some of the assumptions that have been made about the race.

Since the campaigns resumed in January, Bola Tinubu of the ruling All Progressives Congress (APC) has addressed rallies in Adamawa, Yobe, Kwara and Jigawa; while Atiku Abubakar of the main opposition Peoples Democratic Party (PDP) has been in Kogi, Ekiti, Ogun and Oyo states. Peter Obi has held his own rallies in Delta, Osun, Kaduna, Niger and Plateau states just as Rabiu Kwankwaso of the New Nigeria People’s Party (NNPP) has addressed supporters in Plateau, Bauchi, Kaduna and Nasarawa states.

Attendance at the rallies, especially at those of the APC and PDP candidates, has generally been impressive and tends to reflect the structures of the two established parties across the country. It also suggests that the two parties retain massive support among Nigerians, in spite of issues surrounding their tickets.

In previewing this race, some analysts had flashed back to the 1979 election which nearly went into a runoff. Recall that in that election 43 years ago, the five candidates comfortably won in their home regions. Shehu Shagari of the National Party of Nigeria (NPN) narrowly prevailed eventually because he won in the then southern minorities’ states of Rivers and Cross River that had no native candidate in the poll.

The observation that the four major candidates in this election also come from different zones of the country and appear to be popular in their own homes is one of the factors behind a projection that this election may head into a runoff as each candidate may sweep the poll in his home zone.

However, turnouts at the rallies that Atiku has so far held in southern states show that his party has a large support base in those states and indicate that the supporters value loyalty to their party above the ethnic affinity that they share with a major opponent of the party’s presidential candidate. It has helped Atiku too that the PDP now has two sitting governors in Mr Tinubu’s home zone.

However, the same can be said of Mr Tinubu. His rallies so far across the northern zones have also been scenes of multitudes and great kinetic enthusiasm. Atiku and Mr Kwankwaso have been projected to end the dominance of the APC in the northern region where the ruling party currently runs 15 of the 19 state governments. After their party’s rallies in Kaduna and Katsina, some Atiku campaign officials had even boasted that he has inherited the voters of President Muhammadu Buhari in the region, especially in the president’s home North-west zone. Those voters had given Mr Buhari the edge in the region in the five presidential elections that the outgoing president stood in between 2003 and 2019. But now that he is retiring, those voters are up for grabs. Pictures from his rallies however indicate that Mr Tinubu remains well in consideration for the Buhari votes.

The APC has at least demonstrated a capacity to get people to campaign grounds in the North, just as the PDP has in the South. This is remarkable. We assumed that Atiku would face chastisement from Southern voters for disrupting the PDP rotation principle that should have handed the party’s presidential flag to a southern bidder. Anger in the region over the development has been amplified by the dissident group of five (G5) governors of the party, led by Rivers’ Nyesom Wike. Members of the group continue to antagonize and rebuke the party and the presidential candidate at public fora. They have also refused to be part of his campaign or support it in their states. Yet, Atiku has been well received by party members on every campaign stop in the South.

On his part, Mr Tinubu faced a backlash for his same-faith ticket arising from his choice of Kashim Shettima, a senator and former governor of Borno State, as running mate. The choice had drawn instant condemnation from Christian groups across the country. It will only be confirmed at the poll whether that anger has dissipated and if not, to what extent it would hurt him. However, that his rallies and other public engagements have drawn participants from across the faiths should give Mr Tinubu a cause for optimism.

If this election is not decided on the first ballot, it may not be because each of the top four candidates denied the others, votes in his home zone. The structures of the APC and PDP, at least, look strong enough to draw for their candidates more than a quarter of the votes in more than each of 24 states and the Federal Capital Territory, the second condition for election. The one between them with the most votes will most likely be elected on 25 February.

One other assumption is that this is a four-horse raise. At this point, only the candidates of the two established parties appear to have a visible path to victory. The campaigns would have demonstrated to Messrs Obi and Kwankwaso, both of whom are experienced politicians, the value of party structures. Both former governors are virtually running as independent candidates as their parties do not appear to enjoy popularity beyond the auras around the candidates.

Mr Obi’s bid has enjoyed unprecedented support from younger Nigerians. But apart from in the first weeks of the campaigns when they held a series of seemingly spontaneous “million-man” marches in many cities across the country, the youths and Mr Obi’s other supporters have not been showing up in impressive numbers at his rallies. He has also failed to draw prominent politicians to his side, although to do so would have contradicted his vow to destroy the extant political structure of the country which he described as corrupt and blamed for the country’s woes. And while his two major rivals have enjoyed a warm reception in his supposed strongholds, he does not appear to be attracting much attention in their own zones.

Mr Kwankwaso’s campaign too has so far been lack-lustre and appears to have lost steam even before it took off. Outside his catchment state of Kano, people do not seem to rate his bid as serious.

There are still 33 days before the election, so the coming weeks will shed more light on the likely outcome of the election.

Last week, Mr Tinubu and Atiku took their verbal fisticuffs beyond the campaign stop podiums when they demanded the arrest and disqualification of each other from the presidential race over allegations of graft.

Mr Tinubu’s campaign team threw the first punch when they asked security agencies to wade into what had been dubbed the #AtikuGate scandal.

The scandal emanated from a video clip made by Michael Achimugu, who described himself as a former aide of Atiku. A voice in the video, said to be that of Atiku, is heard saying, as vice president between 1999 and 2007, Atiku and then President Olusegun Obasanjo operated illegal “Special Purpose Vehicles (SPVs) accounts to warehouse kickbacks from government contracts for their personal benefits.

Responding, Atiku and the PDP opted to throw barbs of his own, describing Mr Tinubu as a convict who should not be allowed in the presidential race, adding that his alleged $460,000 drug money forfeiture was evidence of a crime.

On Tuesday, after a 72-hour ultimatum he gave the agency elapsed, a spokesperson of the APC Presidential Campaign Council, Festus Keyamo, filed a suit against the Economic and Financial Crimes Commission (EFCC), seeking the arrest of Atiku over the scandal. He joined the Independent Corrupt Practices and other Offences Related Commission (ICPC) and Code of Conduct Bureau (CCB) in the suit.

The PDP on Friday finally wielded the stick against chieftains in three states it accused of anti-party activities. According to a statement by its spokesperson, Debo Ologunagba, the party suspended a former governor of Enugu State, Chimaroke Nnamani, a son of former Ekiti State governor Ayo Fayose and a former spokesperson of Mr Fayose, over the alleged infractions. The party also dissolved its state executive committee in Ekiti State, which was controlled by allies of Mr Fayose.

The former Ekiti governor is with the G5 governors or Integrity Group that has been in open confrontation with the national leadership of the party and Atiku. Mr Fayose did not attend Atiku’s rally in the state and is believed to be routing for Mr Tinubu of the APC instead. His son, Oluwajomiloju, is a candidate of the party in the House of Representatives election. Mr Nnamani is also a PDP senatorial candidate in Enugu but had also declared support for Mr Tinubu.

PDP’s sanction against the members indicates that its patience with the G5 is exhausted. But that does not seem to have deterred Mr Wike. Instead, he has dared the party to extend the punishment to himself and the other governors in his group. The Rivers governor also described the suspension of the members as illegal and warned that it would be challenged in court.

Speaking at the flag-off of the PDP Campaign Council in Bori, Khana Local Government Area of Rivers, on Saturday, Mr Wike said: “Let me also use this opportunity to say to Iyorchia Ayu and his team, your dissolving Ekiti State Exco will not help you in any way. Suspending people will not help you in any way. The battle line has been fully drawn. As I speak to you, we will do everything legally possible to challenge any decision we know is illegal.”

“So, don’t think you can threaten people by saying so, so persons have been suspended. Rubbish! Complete rubbish. We are above that level that you think you can threaten anybody, intimidate anybody with whatever illegal decision you have taken. So, we are waiting for you to announce my own and any other of my friends. Like I have said, when a man says you will not sleep, he too, will he sleep? Will Ayu sleep? Will his cohorts sleep? So, don’t worry, we have the capacity to pay back. We have the capacity to tell you that enough is enough.”

The crisis in the party has become one of the defining issues of this presidential election. It is not the first time that the PDP has gone into an election as a divided force. In 2014, seven of its state governors defected to the then-newly formed APC in an angry rebuttal of the renomination of the then-incumbent President Goodluck Jonathan as the party’s candidate for the 2015 presidential election.

This time though, Mr Wike and his four governor-comrades have refused to quit the party or subject themselves to its authority.

Average retail price of petrol up 24.38% in December – NBS

Article of Faith: The flesh is a liar (1), By Femi Aribisala