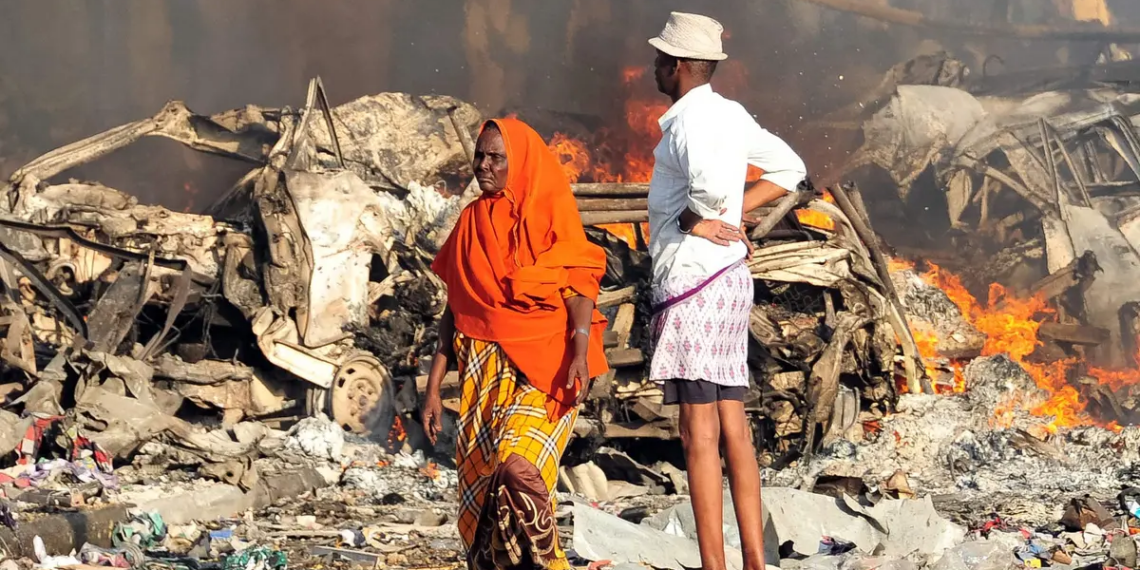 A man and woman look at the damage on the site of the explosion of a truck bomb in the centre of Mogadishu. [Photo credit: © Mohamed Abdiwahab/AFP]

At the end of October 2022, the Somali capital Mogadishu suffered another suicide bomb attack, which killed 121 people and injured more than 300. According to United Nations sources, in 2022 alone, 613 civilians died and 948 were wounded in attacks by the Islamist al-Shabaab terrorist group. Last year’s death toll was more than 30 per cent higher than in 2021, making 2022 the most deadly for the country since 2017.

Somalia’s experience is not an isolated case. There has been a surge in terrorist activities on the continent characterised by escalations in the Sahel, Lake Chad Basin, northern Mozambique and parts of North Africa.

The rise has occurred despite the efforts of governments and regional and international organisations, including the African Union (AU), to contain and degrade violent extremist groups over the past two decades. Africa’s continued struggle with terrorism suggests that the responses of the AU and its member states do not match the nature of the threat – much of which is not new to the continent.

Concerns in the late 1990s – well before the 9/11 attacks – prompted the Organisation of African Unity’s (OAU) adoption of the 1999 Algiers Convention on the Prevention and Combating of Terrorism. The convention, now 23 years old, noted the ‘scope and seriousness of the phenomenon’ and the ‘dangers it poses to the stability and security of states.’ Leaders expressed their determination to eliminate it ‘in all its forms and manifestations.’

Taking up the baton from the OAU, the AU developed the 2002 Plan of Action on the Prevention and Combating of Terrorism. The plan sought to implement the Algiers Convention through better cross-border collaboration on policing and surveillance. In 2011 an African Model Anti-terrorism Law defined terrorist offences, including money laundering and financing of terrorist groups, hostage-taking and terrorist bombings. Combating terrorism is also a key part of the AU’s Silencing the Guns by 2030 plan.

The AU has staged various peace support operations, including the AU Transition Mission in Somalia and the Regional Cooperation Initiative for the elimination of the Lord’s Resistance Army. The AU Peace and Security Council has also coordinated anti-terrorism deployments with regional economic communities, including the Multinational Joint Task Force against Boko Haram, the G5 Sahel Joint Force and the recent Southern African Development Community Mission in Mozambique.

These efforts have in some cases liberated territories held by violent extremists, degraded groups and contained the situation. But despite the AU’s commitment and a massive rollout of material, financial and human resources, terrorism in Africa has deepened and expanded, with devastating consequences.

In addition to al-Shabaab in East Africa, Boko Haram in West Africa has extended its reach since its rise in the 2000s and splintered into factions, quickly adapting its tactics to government responses. The spread and increasing intensity of the threat point to two primary gaps in Africa’s efforts.

First, the endurance of the phenomenon can be traced to a complex cocktail whose main ingredient – deep-seated governance challenges – remains untreated. This has enabled international terror groups such as Islamic State and al-Qaeda to become entrenched in Africa, giving them space to evolve despite efforts to degrade them.

According to the Africa Center for Strategic Studies, the ‘steady growth in capacity among groups,’ resulting partly in their ‘willingness to take on state security forces,’ explains the escalation of their activities.

Second, regional and continental responses remain largely reactive and heavily militaristic, with insufficient attention on sustainable, preventive measures that deal with the problem’s origins. One reason may be that such long-term strategies depend on strong governance structures, which tend to be lacking in the areas most affected by terrorism. So while new terrorism-related threats continue to emerge, existing approaches do not deal with the root causes.

These challenges – together with the lack of political will to act boldly, weak institutional structures and limited resources – create an imbalance between threat and reaction, which explains the rise in insecurity.

At its May 2022 special summit, the AU’s most recent decisions on curbing terrorism included making the African Standby Force (ASF) fully functional and establishing within it a counter-terrorism unit. Member states also called for better coordination between the AU and regional economic communities on the ASF to improve peace support operations. An agreement was also reached on setting up an AU ministerial committee on counter-terrorism to coordinate, monitor and evaluate the implementation of decisions.

The summit called on member states to expedite the signing, ratification and implementation of instruments to combat terrorism. And it reiterated the AU’s commitment to a comprehensive strategic plan of action for the continent.

While these efforts are laudable, they are inadequate. Reducing insecurity caused by violent extremism requires the AU to prioritise national, regional and continental non-military responses that deal with root causes and prevent the emergence of new threats.

To achieve this, good governance must be placed front and centre, and measures taken to deal with the poverty and marginalisation that enables violent extremism to flourish. These steps can be complemented with robust security force action to degrade existing threats.

But whether Africa’s leaders have the sustained political will to take bold decisions, implement existing frameworks and pursue long-term solutions is unclear.