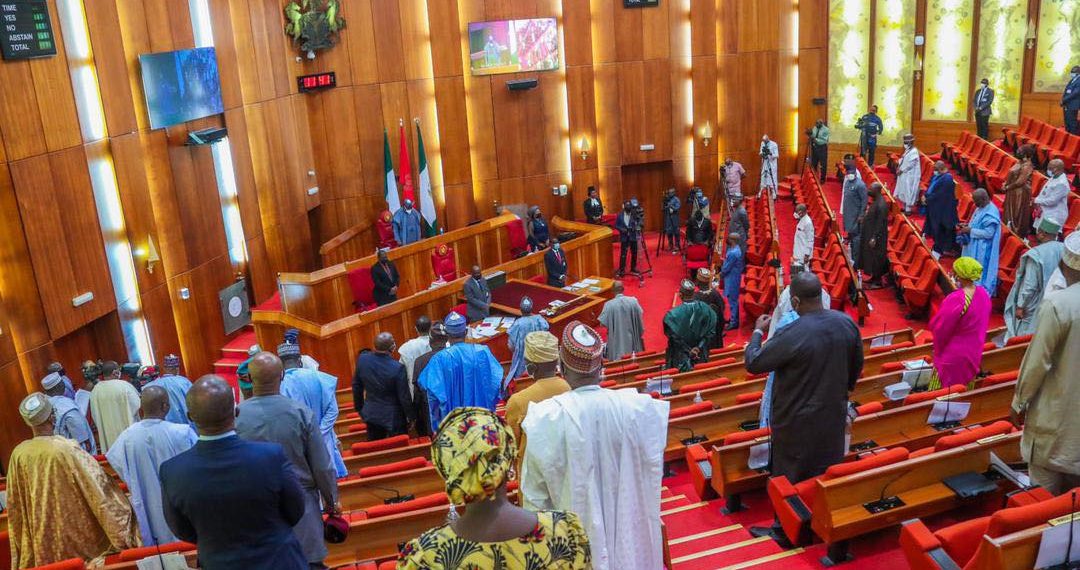 Threat to impeach Buhari, other key events in Nigeria’s Senate in 2022

For most of 2022, the attention of senators was divided and mostly focused on party activities

With the Ninth Assembly winding down legislative activities for the session, the Senate experienced fewer controversial episodes in 2022 compared to previous years.

For most of last year, the attention of senators was divided and mostly focused on party activities like primaries and national conventions. And for lawmakers who were seeking re-election, that was another reason to put a pause on legislative activities.

While some senators won their tickets to return to the Senate, many lost their bids. Several other senators decamped to other parties to secure their ambitions as well.

Despite the near-quiet legislative year which had a fear of high turnover in the tenth assembly, lawmakers were able to make key legislative resolutions and pass major bills as well as make major interventions on several issues.

These activities were, however, not devoid of controversial scenes where the lawmakers were seen going at each other or storming out of the chamber in anger, among others.

In this report, PREMIUM TIMES reviews some major events in the Nigerian Senate in 2022.

The threat to impeach President Muhammadu Buhari was perhaps the most unexpected event at the National Assembly in July 2022.

Some senators from opposition parties walked out of plenary after Senate President Ahmad Lawan refused to let the Senate discuss insecurity. This was preceded by an executive session which lasted over two hours and apparently, lawmakers had resolved to discuss the issue of insecurity afterwards.

The incident occurred at a time security threats across the country, especially in the federal capital, were high. It also happened about two weeks after bandits attacked the Kuje Correctional Facility, breaking out over 400 inmates.

But when Mr Lawan refused to let the lawmakers discuss the issue, they angrily left the chamber chanting songs for “Buhari must go.”

Led by the Senate Minority Leader, Philip Aduda, they disclosed what was discussed behind closed doors and gave the president six weeks to address the concerns or risk being impeached.

Some APC senators like Elisha Abbo and Adamu Bulkachuwa joined the protest.

However, what followed was the lawmakers’ annual recess which lasted about eight weeks and there was no mention of insecurity or impeachment threat upon resumption.

The president’s request for the Senate to approve N23.7 trillion already spent by the federal government was the most recent episode that divided lawmakers in 2022.

The president, in a letter, said the money was borrowed from the Central Bank of Nigeria over 10 years and asked that the lawmakers approve a repayment plan.

PREMIUM TIMES reported how senators disagreed during the consideration of the president’s request last Wednesday. The chamber became rowdy when some lawmakers kicked against the request described as unconstitutional.

The squabble which lasted several minutes saw senators bickering. While some lawmakers demanded details of the expenditure, others wondered why the amount was taken without the notice and approval of the National Assembly.

The disagreement forced the lawmakers to suspend consideration of the president’s request till 17 January to allow for proper scrutiny.

However, when the president signed the 2023 budget, he asked the senators to reconsider their decision and that failure to approve the amount could cost the government over N1 trillion.

The lawmakers are expected to reconsider the president’s request on 17 January.

The lawmakers began steps to amend the 1999 Constitution in February last year. It would be the fifth alteration to the laws.

After lawmakers of both chambers approved a report that proposed 68 amendments to the Constitution, they voted on them electronically.

Some of the proposed amendments voted on include abrogating state and local governments’ joint accounts, financial autonomy for state assemblies and judiciary, legislative summons, life pension for the presiding officers of the National Assembly, virtual court proceedings, Diaspora voting and extra seats for women in the parliament.

Others are independent candidacy, mayor for Abuja, power of the parliament to summon the president and governor, immunity for the presiding officers of the legislature, timeframe for appointing ministers and commissioners, expanding the scope of citizenship by registration, separating the office of the attorney general from the minister of justice and moving VAT to exclusive legislative list.

However, of the 66 proposed amendments, only 44 passed at the chambers.

The Constitution review has however suffered a setback after the Deputy Senate President, Ovie Omo-Agege, announced that 25 states have refused to consider and vote on the amendments. The states, he said, threatened to take no action on the bills unless four more constitutional amendment bills are considered and passed by the National Assembly.

Of the 24 bills rejected during the voting process, five were gender bills. The bills were rejected despite the presence of the wife of the Vice President, Dolapo Osinbajo, who was present to appeal to the lawmakers.

The senators voted against affirmative action for women in political parties’ administration and the bill to create special seats for women in national and state assemblies.

The bill for special seats for women in parliaments, sponsored by Nkeiruka Onyejeocha (APC, Abia), seeks to alter sections 48, 49, 71,77,91, and 117 of the 1999 constitution by creating one senatorial seat and two federal constituencies in each state and FCT for women. It also seeks to amend section 91 of the 1999 Constitution by creating an additional 108 seats in the state houses of assembly for women.

Also rejected were bills for affirmative action that seek at least 35 per cent position for women in political parties, a bill to grant citizenship to foreign-born husbands of a Nigerian woman and inclusion of at least ten per cent affirmative action in favour of women in ministerial appointments.

The rejection of the bills triggered huge protests from many women groups across the country. But no amendment was made.

Being a pre-election year and with many senators seeking return tickets, a number of them defected to other parties.

The ruling APC lost the most members who were also ranking members in the chamber. Top lawmakers like the former Senate Leader, Abdullahi Yahaya and Adamu Aliero left for the opposition Peoples Democratic Party. The duo, from Kebbi State, accused the state governor of frustrating the efforts of party members in the state.

Another ranking senator and former Minority Leader, Enyinnaya Abaribe, left the PDP for the All Progressives Grand Alliance – citing a similar disagreement with his state governor.