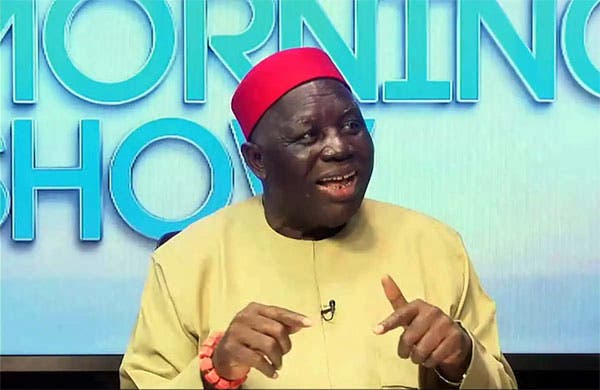 TRIBUTE: The George Obiozor I knew, By Osita Chidoka

Ambassador George Obiozor, president of Ohanaeze Ndigbo, died on the 26 December. He was 80.

“Osita, good to see you. I want to see you today. I will be at the Rockview Hotel. It is important, we see” This was Uncle Georgeo, Amb. George Obiozor, on the 21st of September 2022 at the Abuja Airport. Uncle Georgeo was in a wheelchair making his way out of the Arrival Hall when I walked up to greet him.

Later that day I went with Nkumeh Okoronkwo to Rockview Hotel to visit with him. He was frail but lucid and passionate. The subject and content of our conversation will remain confidential and will form part of my memoirs. He spoke from his heart, gave me his recent academic work, and asked me to do certain things which I was planning to update him about in the New year. Sadly I will not be able to do so.

Ambassador Obiozor died on 26 December. He was 80 years old.

I met Uncle Georgeo through Dr. Arthur Nwankwo in the 1990s. Arthur was his best friend together with Chuba Okadigbo. They were in the US as students and all excelled in their chosen part.

On my graduation ceremony day at Nsukka, we all left from Ikeogu’s house with Uncle Georgeo to Nsukka. He came in from Lagos that morning with a pack of Havana Cigars and Cognac though neither Arthur nor himself were smokers or drinkers. Arthur was permanently entertaining hence the gift.

Ambassador Obiozor use to call me “the young intellectual” since my days at George Mason when he was Nigeria’s Ambassador to the United States. Visiting him was a learning moment. He was deep, humorous, and intellectually rigorous.

Christmas 2006, I went with Mallam Nasir El-Rufai, then FCT Minister, to spend time with Uncle Georgeo in the newly acquired Ambassador’s residence in Potomac Maryland. The evening was enlightening and entertaining for Mallam Nasir. The advice he gave us that day about politics and power remains indelible and as true today as it was then. He told us the story an Isreali friend told him on why Jesus was killed with the moral: you need a witness.

When Arthur Nwankwo passed, Ambassador Obiozor was the first person to call me. He said, “Is it true that AT is gone?” I said yes and he broke down in tears. He cried for about 10 minutes on the phone lamenting that AT is gone, Chuba is gone and what will his life be without his people. He asked me to take charge of the funeral and ensure that we had a service of songs for AT at his New Haven residence. I ensured that happened with his support.

The day his Library was burnt, I called him and from his voice, I knew a part of him died on that day. He was an academic per excellence. His education at the University of Puget Sound and Ph.D. from Columbia University was top-notch. Ambassador Obiozor’s academic work on international relations stood him out.

In 1992 Fourth Dimension published his book “Uneasy Friendships: Nigeria-United States Relations and in 1994 he released “The politics of precarious balancing: an analysis of contending issues in Nigerian domestic and foreign policy” I recommend these books to aspiring and current students of International Affairs.

His passionate avowal of the promise of Nigeria and love of his Igbo origin is an example to follow. He was an Igbo patriot. His role in the return of Ikemba from exile is a story for another day.

Whenever you hear me say Ajo anu, the word came from Ambassador Obiozor. He told us that “ihe karia ya e tuom ya Ajo anu” literally means: When someone or something confounds me I call him or it tough animal.

Uncle Georgeo, Ajo anu, President General, Ambassador, intellectual, teacher, adviser, wise one I bid you farewell. I will do what you asked me to do. I will continue to ensure that the concentric circle of conspiracy started in AT’s house will not die. Your memory will not die as your words through your writings, interviews continue to ensure your immortality.

Together with the departed, let us pray: Lord grant the soul of George Obiozor mercy as he journeys toward his origin. Amen.

INTERVIEW: Women in Agriculture: How I combine farming and schooling – Hope Manzawet