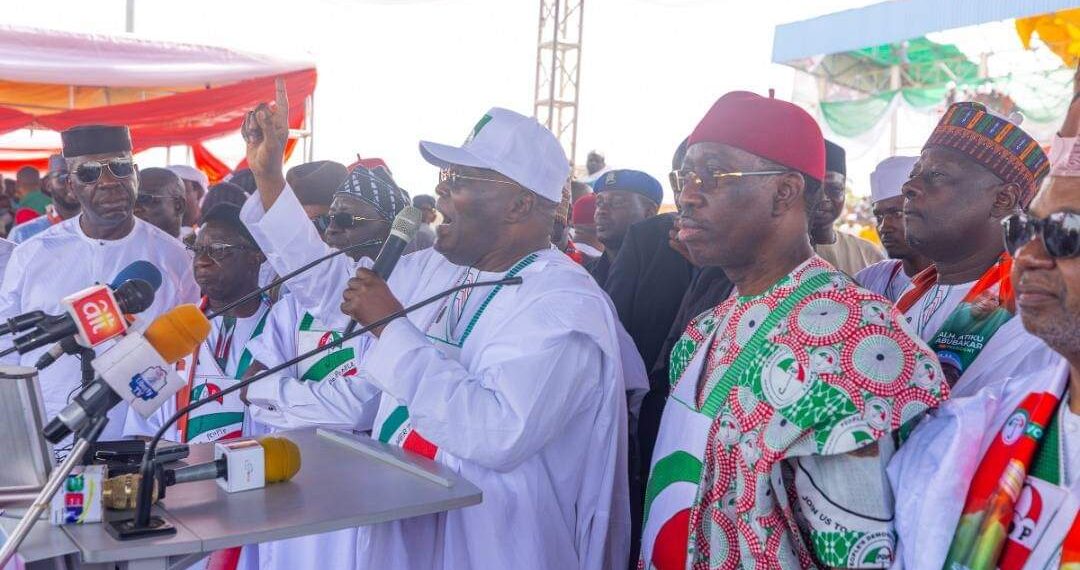 ANALYSIS: Beyond attacks on Atiku’s convoy, his supporters

Aside from the rift in the Peoples Democratic Party, Atiku Abubakar has faced physical attacks on his entourage and supporters during campaign stops in two states controlled by the ruling party

The plausible and perhaps only justification for how candidates of political parties react or handle physical attacks would be something like: “they signed up for it” or “they knew what they were getting into” or – and this is probably the most common – “it’s Nigerian politics, nothing new.” But one cannot help but worry about the safety and health status of these politicians. In this case, health status goes beyond the physical (even though one should worry too) but the mental as well.

On a normal day, these people would not travel by road or mingle with so much crowd or do anything that could bring even the slightest danger but alas, a requisite for campaigns.

One incident that comes to mind is the case of Shinzo Abe, who was fatally shot at a close range and killed while giving a speech at a political campaign event in July. Another incident that comes to mind is the recent attack on a former Pakistan Prime Minister, Imran Khan, who was shot in the leg during a protest march early this month. He was hit after a gunman opened fire at the protest ground.

Then there is the case of Atiku Abubakar, the PDP presidential candidate whose convoy has been attacked twice while on campaign missions – as if he does not have enough ‘attacks’ within the party to worry about. Again, it is a requisite for the campaign.

Valleys of the shadow of death

One thing these candidates look out for when planning campaign rallies is the crowd. It is key for every outing – more like the only inventory needed. On campaign trips with presidential candidates, one could hear the aides asking people on the ground questions like: “how is the turnout?”, “are they many?” or “how are our numbers?”. Whether the crowd is organic or inorganic (an article for another day) does not matter at this point.

The team needs the crowd for two major reasons. One, for validation and satisfaction that makes the candidates tell themselves that they are loved by the people and that the people will vote for them. And two, for photo ops. Really, what is a campaign rally without the long-range shots where the cameras are positioned to capture the heads of the people in attendance – after which it will be shared on social media to “pepper” the opposition parties – with captions like “massive crowd” and “thousands of supporters” or even “great multitude.”

So, for Atiku, desiring a large crowd that will perhaps cheer from the airport to the campaign ground is not out of place. Only. he desired the right crowd. The kind that would wave and shout and clap at every sentence he makes, not the kind that would throw stones at his convoy and destroy vehicles with sticks.

Atiku and his entourage were leaving the palace of the Shehu of Borno for Ramat Square, for the presidential rally, when they were attacked by suspected thugs. One person was reportedly killed and scores were injured. The campaign spokesperson, Dino Melaye, announced the attack and said no fewer than 74 supporters were injured in the process, while over 100 vehicles in the convoy were vandalised. He also accused the All Progressives Congress (APC) of sponsoring the thugs that attacked them.

It was the second time the PDP team would be attacked in three weeks.

Last month, suspected thugs invaded the PDP campaign rally in Kaduna and attacked the crowd with sticks and machetes, leaving many injured. And, as expected, the party blamed APC for the attack.

While one would think it is normal to blame an opposing party for the attacks, a check by PRNigeria actually showed that Atiku’s convoy was attacked by youths identified to be supporters of APC in Maiduguri – as disclosed by witnesses who spoke to the paper. And while a few persons were injured, there was no sufficient evidence to prove that up to 74 PDP supporters were hospitalised and 100 cars vandalised.

Meanwhile, the police in Borno State said there was no attack on Atiku’s convoy but the Inspector General of Police, Alkali Baba, said the police have set up a team to investigate the attack.

At this point, different theories could be used to explain the attacks especially since they happened in APC-controlled states. Already, there are assumptions that underneath the attacks, is an assassination attempt – a theory Atiku’s loyalists and supporters would cling to.

A former Deputy National Publicity Secretary of the APC, Timi Frank, believes the theory. He said the series of attacks is more than a coincidence and asked President Muhammadu Buhari to caution his party at state levels. Mr Frank also called for the arrest of the Kaduna APC governorship candidate, Uba Sani, after the attack on PDP supporters in Kaduna.

Another theory could be jealousy and fear on the part of the ruling party. Jealousy that the number of residents loyal to Atiku is on the rise and fear that this could translate to votes at the 2023 general elections. The fear of this becoming a reality is even heightened because of religious and ethnic factors.

These allegations or theories could become a lot more believable with the deafening silence from the ‘accused party’. By now, one would expect Festus Keyamo to assure that the APC is not behind the attacks.

Also, if there is any truth to the allegations, it means some of these candidates have zero regards for the peace accord that they signed shortly before the start of campaign activities. While the PDP has said it will petition the National Peace Committee, led by a former head of state Abdulsalam Abubakar, the New Nigerian People’s Party has asked the president to call the state governors to order after the attack which it described as outrageous, barbaric, repulsive, and intended to undermine the nation’s emerging democracy ahead of the polls.

Atiku has many more APC-controlled states to take his campaign to. This gives him a lot more reasons to worry – in addition to the attacks and unrest he is getting from the G-5.

In the past week, Atiku had to deal with the aggrieved governors and their demand for “equity, fairness and justice” – as their leader, Governor Nyesom Wike of Rivers State would say. This technically translates to the resignation of the National Chairman, Iyorchia Ayu.

Atiku had to deal with Governor Samuel Ortom of Benue State who has grown louder in the past weeks – perhaps a deep concentration of the Wike factor.

“To hell with Atiku and anyone supporting him. They should go and tell him. You want me to be a slave for a Fulani. It is better that I die. Anybody supporting Atiku is an enemy of Benue,” he said angrily. “I will never support a Fulani man to become president. If there is another person who is ready to work with me and ensure the security of my people, I will work with him.”

He, however, apologised days later after a meeting of the group with Bauchi Governor Bala Mohammed and told supporters not to read meaning into his words.

Similarly, Mr Wike said the G-5 said they are ready for reconciliation and that they never closed the doors for it. He said they only want the right thing to be done and that the party abide by its mantra – equity, fairness and justice.

An additional weight on the shoulders of Atiku is the pressure to make up with the G-5 and gain their support. Although he had said he would move on with his campaigns, many, including candidates running for different positions in the party and from the G-5 states, have said the absence of the governors could cost them their own ambitions at the polls.

It is not clear how Atiku intends to reconcile with the G-5 without granting their one request – Ayu’s head on a platter.

As he continues with campaigns, he would need to brace up – physically and mentally – for possible attacks from within and outside the party. Because clearly, he will need more than Dino’s tantrums and ridiculous songs to keep the demons at bay.