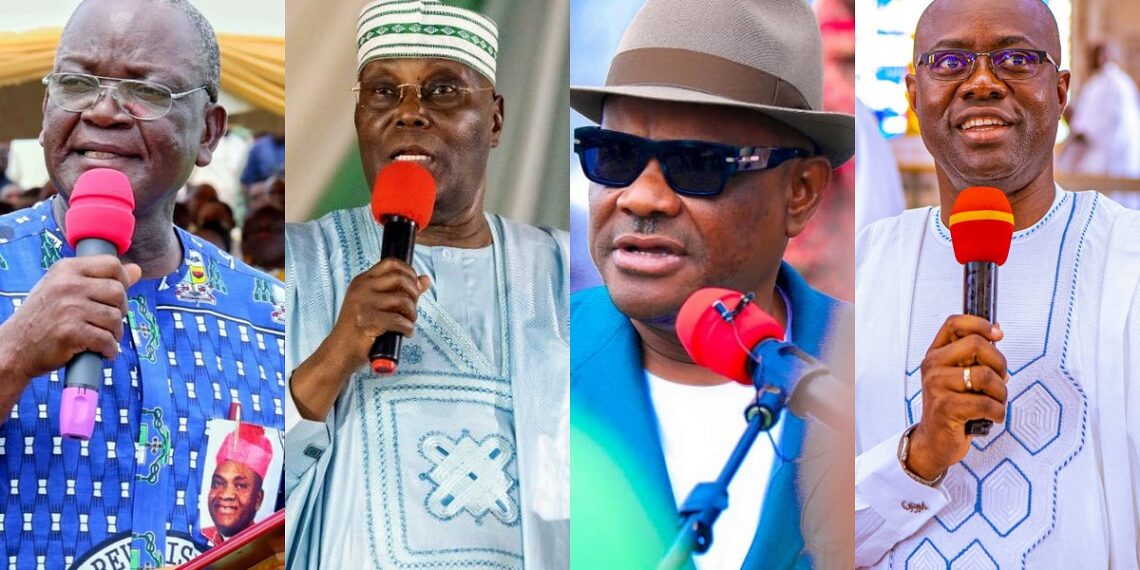 ANALYSIS: PDP’s endless crisis and the dangers it portends

After months of trying to placate aggrieved leaders in the PDP, its presidential candidate Atiku Abubakar says he is moving on with his campaigns.

One thing the Peoples Democratic Party (PDP) has done remarkably and consistently in the past months is keeping up with the fights in the party so much so that many political pundits begin each new week with questions like “What will Wike say this time?” or “What will Ayu do this week?” or “What announcement will come from the G-5 this week?.”

The G-5 are the five PDP governors who have vowed not to support the party’s presidential candidate, Atiku Abubakar, in his presidential bid until the National Chairman, Iyorchia Ayu, resigns. They are governors Nyesom Wike of Rivers State, Okezie Ikeazu of Abia State, Seyi Makinde of Oyo State, Ifeanyi Ugwanyi of Enugu State and Samuel Ortom of Benue State.

Anyway, political pundits usually do not have to wait up to 48 hours to get their answers as updates are provided every day of the week. As mentioned before, it is almost impossible to keep up with the blockbuster that is the PDP.

The crisis took a new dimension in the past week and it seemed all the cliques and camps had something to say.

To further his cause, Mr Wike said the PDP will win the polls at all levels in Rivers State, except the presidency because the state chapter is yet to decide.

“PDP will win our state. I am not hiding it as far as the governorship, House of Representatives, Senate and State Assembly is concerned. The other one (presidency) we have not decided until the right thing is done.”

This was followed by Mr Ayu’s comment reminding the G-5 of just how much power he wields. He told some supporters that he had the power to stop any PDP candidate from contesting but has decided to remain silent.

“I have been silent over all the things you are hearing against me because I don’t want any crack in the party…I have the power to ‘say you and you will not go anywhere because I will insist that I must sign before you go anywhere,” he said. “But I have signed for all candidates produced by the PDP to go ahead in their dreams. Whether I liked it or not I signed.”

Although he did not mention any names, Mr Ayu’s comment is not unrelated to the Oyo governor, Mr Makinde’s second term ambition or Messrs Ikpeazu, Ortom and Ugwanyi’s senatorial bids.

Messrs Wike and Ortom did not waste time reacting to Mr Ayu’s comment. First, he was dared by the Rivers State governor to “stop any candidate” and then he was dismissed by the Benue State governor.

Mr Ortom in a statement described Ayu’s threat as lame. He insisted that his victory at the poll was a “people’s given mandate which neither Ayu nor his loyalists could overturn.”

But the party’s national chairman did not stop there. He also said no one can remove him from his position – except God. It is, however, not the first time he has said so. Months ago, he reminded the aggrieved members that he was elected for a term of four years and would serve through his entire tenure before he exits.

Many are still amazed at how Mr Ayu went from “I will do everything to promote the interest and image of my party. If the PDP says I should step down after a presidential candidate emerges and happens to be from the North, I will be very glad to do so because what we want is to take over the government and run the government in the interest of Nigerians…” to “…If you hear that they want to chase Ayu out as national chairman, don’t be worried; nobody is going to sack me as national chairman of our party. I will leave the seat on a day that God permits…”

Many are also amazed at how he has ‘found his voice, having vowed not to react or respond to comments directed at him, particularly from Mr Wike’s camp.

Having lingered this long, there is no telling if (or when) the crisis will end. It is also obvious that all the aggrieved members in the party have refused to sheath their swords. Since the presidential primary in May, there has been a series of failed meetings and negotiations.

Although all the parties involved claim to be agitating for the good and well-being of the party and Nigerians, many still believe that the ‘fight’ is for their personal gains.

Mr Wike, for instance, is not just demanding a balance in the party’s leadership structure, he reportedly asked Atiku to serve a single term if he wins the presidential election next year. The governor also asked that he be allowed to pick the leadership of the tenth National Assembly if the PDP wins. Those claims have, however, been denied.

Mr Ayu, on the other hand, is accused to be clinging to the chairmanship position because he still wants to have control over the party’s finances.

Whatever the case may be, the players in the game seem to care less about the dangers the lingering crisis portends for members and the party at large.

Top on the list is a likely defeat at the polls in the 2023 general elections. Considering the division among members, withdrawal of support from the G-5 who are considered among the influential governors in the party and the threat to support candidates of other parties, the PDP risks losing the election – a major setback it would be for a party that is struggling to return to the power it held for 16. It would also mean remaining in the opposition for another four or eight years – a role the party has not exactly performed well.

Defection is another danger the party risks should this fight continue and it loses the general election. It is bad enough that some party members are torn between the possibility of having to vote for the PDP at other levels and considering a different candidate or party at the presidential level. Many would find it easier to switch camps particularly if the party loses.

This could also lead to a lack of trust among members. With the accusations and counter-accusations among aggrieved members, it would not be unusual for supporters from both camps to entertain thoughts that there could be an atom of truth in the allegations. This makes supporters easy prey for opposition parties.

Not to mention how the crisis is a way of creating content for other opposition parties to latch onto. Since the campaigns started in September, the PDP crisis has been one of the major selling points for parties like the All Progressives Congress (APC).

Many times, the APC presidential candidate, Bola Tinubu, and his campaign spokespersons have told Nigerians not to consider or vote for the PDP at the general elections because the latter has failed to put its house in order and could mean that they will not be able to handle the affairs of the entire country.

Ignoring the fight, an option

Some of the PDP leaders like Atiku and the head of the campaign council, Sokoto governor Aminu Tambuwal, have resolved to continue the campaigns without the support of the G-5.

Moreso, while some party officials like the spokesperson, Debo Ologunagba, have said the party will continue “to negotiate” with aggrieved members, others have come out to say Atiku and the campaign council will not be bothered by whatever threat or setback Mr Wike and his team want to issue.

A campaign spokesperson, Daniel Bwala, earlier said the Rivers State governor is playing God and that the party would survive if he leaves. He also criticised Mr Wike for advocating equity, fairness and justice which he does not deliver in his own state.

In the same vein, Atiku, in an interview with Voice of America Hausa, said he has moved on. He said though the matter is yet to be resolved, he has no worries about that anymore.

“And at this junction, it’s improper to talk about leadership change in the party while elections are fast approaching.”

As it stands, there is Mr Wike and the G-5, on one hand, considering the party to support at the presidential level, there is Atiku and the campaign council moving on with campaign activities not minding the demands of the aggrieved members. Then there are officials like the spokespersons who still tell Nigerians that there is no crisis in the party, just disagreements that will be resolved soon. Two things are certain, there is no end in sight and the dangers this crisis protends are not being considered by the warring parties.

The abduction of Pa Reuben Fasoranti, By Festus Adedayo