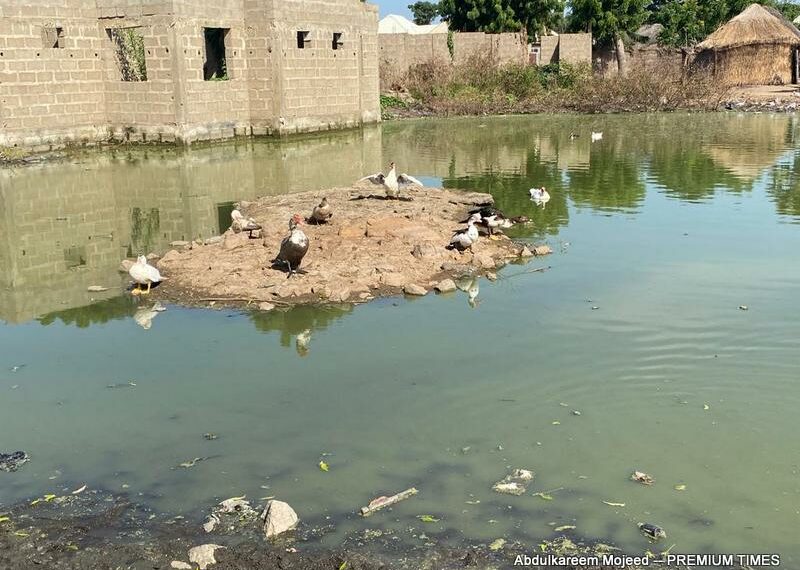 The worst hit victims of the floods are residents of communities hosting major tributaries of the Benue River that cuts across seven of the 21 local government areas in Adamawa.

Hafsatu Muhammed spoke softly with a pitiable mien, her words punctuated by mixed feelings of fear and uncertainty. Since the recent flooding recorded across Nigeria destroyed houses and farmlands, she and her nine children have remained stranded, squatting at the Limawa Day School on the outskirts of Yola, the Adamawa State capital.

Speaking to PREMIUM TIMES last week, she lamented how she stood the risk of being ejected from her temporary place of abode, the community school.

“They are asking us to vacate this place,” she said, her words barely audible enough to mask her frustration.

She explained further that she and other displaced occupants of the school had pleaded with the Limawa school management to allow them stay within the premises until they could return to their flooded homes, but they declined.

Like Mrs Muhammed, the floods that submerged houses within the first weeks of August still haunt residents of Adamawa, especially women and children. When PREMIUM TIMES visited the state, many of them recounted how their houses and means of livelihood were destroyed by over-flowing water around the “Bakin Kogi” community in Yola North Local Government Area of the state.

Although the water has considerably receded, the hope of freedom and resettlement remains blurry for most women and children across the over 117 communities destroyed by the recent flood disaster in the state.

“Our house is just behind the customs base close to the river, so whenever the water goes above drainages and rice farms, we are the first to be displaced,” Hauwa Ibrahim, a resident of the Bakin Kogi community displaced by the flood, narrated.

The mother of eight, who alongside her children and other women were relocated to a nearby school (Limawa Day School) two months ago, is now sleeping on a bare floor. She complained of how miserable life had become in the midst of blood sucking mosquitoes.

She added that every part of their village was flooded before and that they all fled their homes for safety.

The devastating floods that ravaged communities across states in Nigeria within the last three months have disrupted hundreds of villages and urban centres, displacing over 2.4 million people. According to official statistics, over 600 fatalities have been recorded so far. Similarly, expansive hectares of farmlands have been swept off.

Many Nigerians have described the flooding incident as the worst aftermath of climate change Nigeria has witnessed since the nation recorded similar disaster in 2012, However, experts have argued that the impact of the floods would have been minimal had the necessary infrastructures needed to control flood across zones in the country been properly maintained by the government.

In Adamawa one of the most affected states in Nigeria, residents told PREMIUM TIMES that the worst hit are mostly residents of agrarian communities hosting major tributaries of the Benue River that cuts across seven of the 21 local governments in the State.

According to the official tallies of the National Emergency Management Agency (NEMA) zonal office in the state, within three months (July to September) when rainfall was at its peak, 12 LGAs were submerged. Within this period, 82, 730 residents across 117 communities in these LGAs were affected, 13,788 households got damaged, 51 people got injured and 27 deaths were recorded.

During a recent visit to the state, PREMIUM TIMES observed that many houses have been destroyed, expansive farmland ruined, while roads and culverts linking communities have been washed off by the floods.

Our reporter also observed that the flood incident in the state was mostly aggravated by the poor management of drainage pathways and refusal of the government to dredge major rivers and tributaries across the state.

At the Limawa School, Mrs Muhammad said the Red Cross International provided them with non-food items such as brooms and Dettol, but feeding, accommodation and other essentials still remain uncertain.

“What we want now is for them to help us even for a week because we can’t stop children from studying. We need a place to sleep. We’ll get the money to clear and fumigate our houses,” she said. She added that Mrs Ibrahim was forced out of her house by snakes.

“We were provided with mats but ten people for one mats and it can’t take us. Some of the classes were locked but they opened the nursery section when we pleaded with them,” Mrs Muhammad said.

When PREMIUM TIMES moved around the school premises, the women and their children were seen roaming about, mingling with students in school uniforms.

Stacked by the corners and at strategic corridors of some of the classes were bags of clothing, mats and tarpaulins hung around the classroom doors. 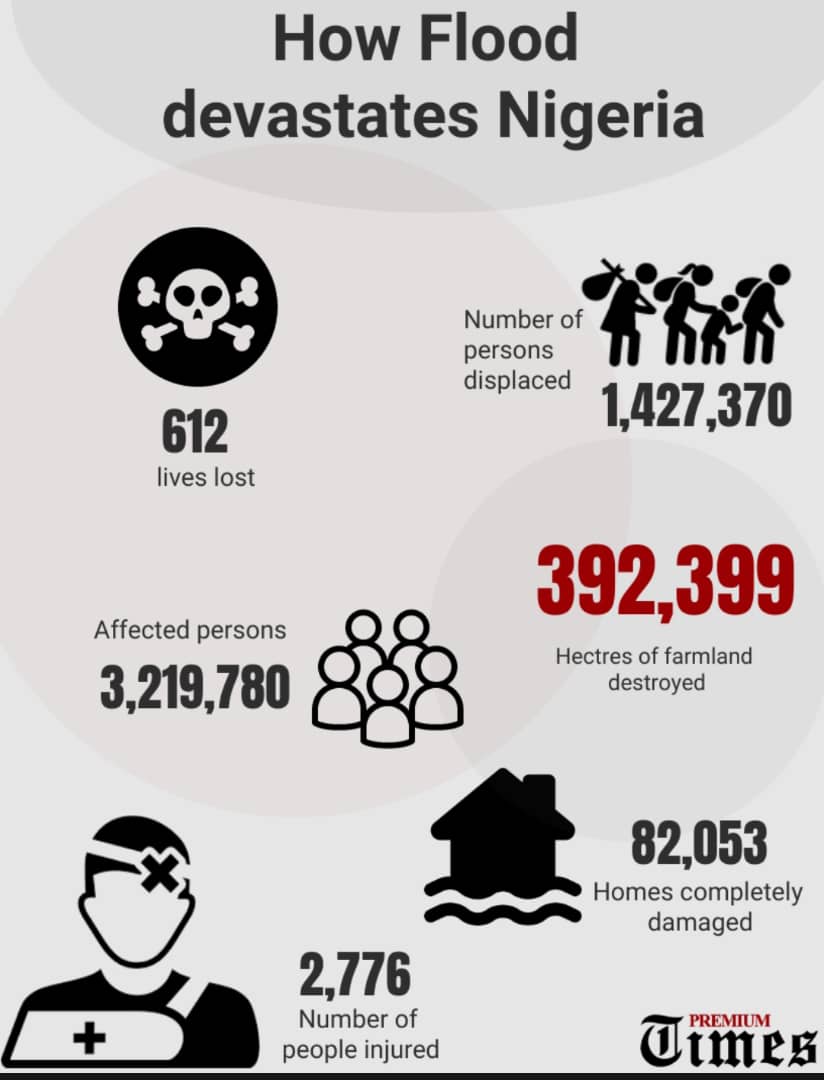 Although many of the displaced victims in the Bakin Kogi community have returned to their various homes to start all over again, Mmes Ibrahim, Muhammed and other women still squatting in the school said they cannot go back because their houses are still submerged by water.

“We want to go back to our homes but it is cold, everywhere smells and diseases are rampant but we have no option,” Mrs Ibrahim said.

“We will still go back on Sunday because it’s better than staying here.

“If people send spaghetti and other relief materials, it doesn’t get to us. The powerful ones will take everything. But the government has not sent anything yet,” Mrs Ibrahim said.

Limawa Day Secondary School, Jimeta, is one of the schools within the Bakin Kogi community where displaced flood victims were camped.

At the school, it was observed that all students were studying on the bare floor. The entire surrounding environment is littered with dirt and open sewages, and there are no toilets, library, laboratories and even seats for both teachers and students/pupils. Perturbed by the filthy nature of the school environment, a Public Health Specialist, Richard Jonathan, said the people within the premises are susceptible to diseases like, Scabies, Schistosomiasis (a risk factor for urinary bladder cancer), Cholera, Giardiasis (a parasitic infection) and Malaria among others.

Displaced children were seen struggling to cook a sachet of indomie with firewood set up outside while pupils of the school studying outside watched from afar.

According to the United Nations International Children’s Emergency Fund (UNICEF), more than 2.5 million people in Nigeria are in need of humanitarian assistance, amidst the flood disaster in the country.

Of this figure, the UN agency said 60 per cent (1.5 million) of flood victims are children who are at increased risk of waterborne diseases, drowning and malnutrition due to the most severe flooding in the past decade, UNICEF warned today.

“In the north-eastern states of Borno, Adamawa and Yobe alone, a total of 7,485 cases of cholera and 319 associated deaths were reported as of 12 October. As rains are expected to continue for several weeks, humanitarian needs are also expected to rise,” UNICEF said.

At one of the Internally Displaced Persons camp in Limawa School, some of the women complained of how they slept in the midst of lambs.

The women leader at the camp, Alice Algali, said they were only given spaghetti, rice, tarpaulin, mats among other few items, which were inadequate. She lamented that people who were not affected by the floods came to cart away some of the items they were given.

“What they gave us is not enough. The food items get exhausted that same day. We have been here for over two months. We need help,” she said.

Limawa school principal, Musa Hassan-Jada, said that when they resumed two months ago, he was surprised that people were already camping in the school. Consequently, he said he had an emergency meeting with his teachers, and it was resolved that their students be relocated to a nearby school.

“We spent a month there (the nearby school),” the principal said.

“After we realised that almost half of those displaced who were camping in our school had left, we had to come back. We are making use of a part while they occupy the other side.

“It was such an emergency and we don’t know what to do, otherwise the academic activities cannot be combined with this type of situation but for the meantime we are managing to the best of our ability,” he added.

No Respite for Women Farmers

In Adamawa state, some of the major victims of the flood disaster are women planting rice, beans (soya beans) and other crops as well as fishermen across agrarian communities in the state.

Talatu Dauda, a farmer in Girei LGA, is one of those affected by the flood.

She told PREMIUM TIMES that had the release of Lagdo dam water been delayed by the Cameroonian authorities, she would have been among the rice farmers smiling to the bank in October. But unfortunately, Mrs Dauda is one of the farmers in the Koh community of Girei LGA badly affected by the flooding incident in the state.

“The flood washed away my entire farmland. I have five different farm plots in this community, I couldn’t bring out even a grain from all the farms,” she lamented.

At the commencement of the rainy season farming, she explained how she approached a nearby micro finance bank for a loan to grow rice, cowpeas and maize. The farmer said she got a loan of N500,000 from the bank but in less than two weeks to harvest, her farmland (five hectares) was submerged by the floods.

The farmer said she is worried because feeding her eight children has become quite difficult.

“My plan is to commence dry season farming if I can get financial assistance and farm inputs,” she said.

In an interview with PREMIUM TIMES, the Executive Secretary, Adamawa State Emergency Management Agency (ADSEMA), Muhammed Suleiman, said there is an ongoing effort to distribute relief materials to affected individuals across the 21 LGAs in the state.

“All the LGAs across the River Benue valley, starting from Fufore, Yola South, Demsa, Numan, Girei and Lamurde, all the communities close to the river bank have been washed out completely,” Mr Suleiman said.

“All in all, as a result of flooding in Adamawa state, we have recorded 51 deaths, and as the water is receding, we are still discovering more corpses.”

The official said 71 people sustained arrays of injuries and that over 20 thousand hectares of farmlands have been destroyed.

At Dasin Hausa community in Fufore LGA, 47-year-old Aishatu Usman, who planted maize and sorghum, lost everything to the floods. Since the flood incident, she said it has been difficult to provide food for her eleven children. Aisha now looks towards the government for relief and support, she told PREMIUM TIMES.

“The flood destroyed everything I planted on my one acre of farmland this year,” she said.

“We are in dire need of food assistance because we have not seen any government assistance since the disaster occurred,” she lamented.

Buhari off to London for ‘medical check-up’