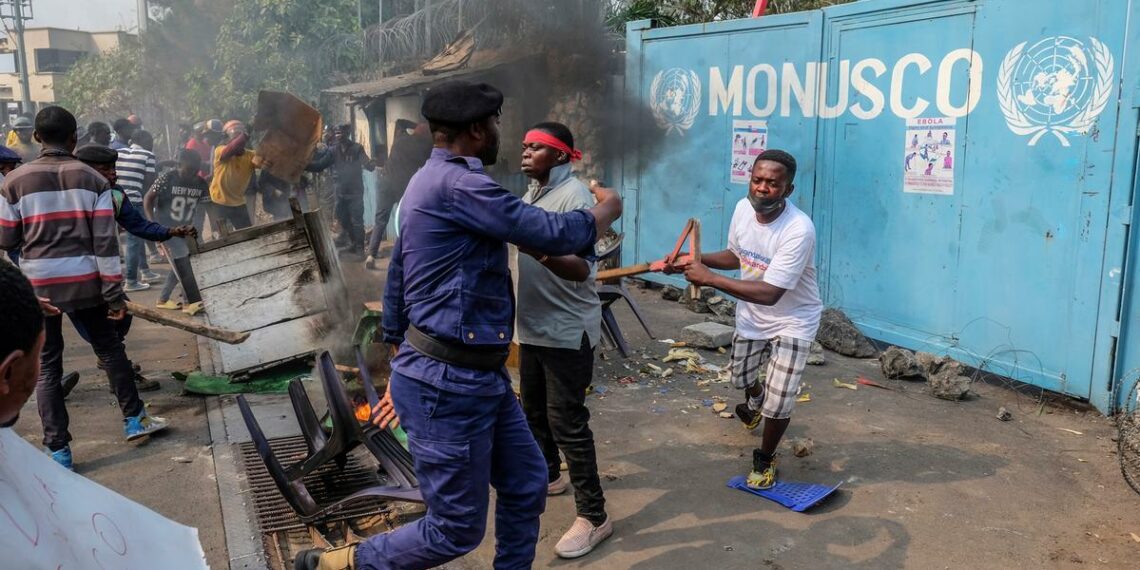 Protest against the United Nations peacekeeping force (MONUSCO) deployed in the Democratic Republic of the Congo, in Goma, Monday, July 25, 2022. Demonstrators said they were protesting against the rise of insecurity and inaction of the UN in the region. [Photo credit: © Moses Sawasawa/AP]

ANALYSIS: What do protests say about UN peacekeeping in Africa?

In the past few months, two United Nations (UN) peacekeeping missions in Africa have encountered violent protests from the local populations they’re meant to protect. Protesters in Mali and the Democratic Republic of the Congo (DRC) demanded the immediate withdrawal of the UN Organization Stabilization Mission in the Democratic Republic of Congo (MONUSCO) and the UN Multidimensional Integrated Stabilization Mission in Mali (MINUSMA) from their countries.

While the demonstrations have distinct local drivers, they indicate the crisis facing UN peacekeeping operations in Africa and beyond. The situation is driven by two undercurrents: the missions’ limited operational effectiveness, especially against non-traditional threats such as terrorism, and the erosion of core UN peacekeeping principles. These are the host nation’s consent and the operations’ legitimacy in the eyes of local populations.

Amid the protests, momentum is gathering around UN Secretary-General António Guterres’s call for a New Agenda for Peace that ‘embodies a new effort to agree on more collective security responses and a meaningful set of steps to manage emerging risks.’ Mr Guterres’s appeal provides an excellent opportunity to assess UN peacekeeping based on a critical examination of the challenges that missions face.

MONUSCO was deployed to the DRC in 1999, and MINUSMA to Mali in 2013 following the onset of insurgencies in both countries. They were meant to support the host nations’ efforts to achieve stability and peace. Both received varied and, at times, limited acknowledgement and cooperation from the host governments.

MINUSMA’s four priorities are to support implementation of Mali’s peace and reconciliation agreement, help stabilise and restore state authority, protect civilians, and assist in providing humanitarian assistance. It comprises 13,289 soldiers and 1,920 police. Like MONUSCO, it is authorised to use all necessary means to implement its mandates.

Despite the presence of these peace missions and other parallel deployments by international actors, instability remains high in both countries. Escalating violence has caused immense suffering for civilians, who are now protesting against the missions.

In the DRC, the protests were spurred by complaints that MONUSCO failed to protect the population from attacks by armed militants. Similarly in Mali, MINUSMA was accused of doing little to protect people from attacks mainly by Islamic State-affiliated groups. Given that the two countries’ police and military have the primary responsibility for protecting civilians, laying the blame for insecurity on peace missions is ill-informed, some analysts believe.

Both missions under-prioritise political dialogue and a people-centred protection approach to peacekeeping, contrary to the recommendations of the 2015 Report of the High-Level Independent Panel on UN Peace Operations, and Action for Peacekeeping.  So on one level, the protests are valid.

The two missions have also been embroiled in the murky national politics of their host nations. Local politicians have invariably whipped up anti-UN peace mission sentiments among some segments of the population.

Al Jazeera reported in July that ‘The protests in DRC were driven by a faction of the youth wing of President Félix Tshisekedi’s [Union for Democracy and Social Progress] ruling party.’ UN officials claim the DRC mission has been a victim of a well organised disinformation campaign to stigmatise it and perhaps force its untimely departure.

Similarly, protests against MINUSMA were reportedly organised by Yerewolo Standing on the Ramparts, an anti-Western and anti-MINUSMA civil society movement that backs the military government which seized power in a 2020 coup. The protesters accused the peace mission of undermining Mali’s sovereignty. Yerewolo also organised protests against France’s military presence in Mali that might have contributed to the withdrawal of French soldiers in early 2022.

Global geopolitical rivalries have exacerbated local dissatisfaction with the peace missions. Africa has become a battleground in the shifting world order – in the case of Mali, pitting France against Russia. Yerewolo supports the presence of Russian paramilitaries and mercenaries in the country. During a 22 September rally in Bamako, protesters waved the flags of Mali and Russia and chanted slogans against MINUSMA.

The two missions have also had to deal with regional rivalries and tough security environments. In the DRC, Rwanda’s government is accused of stoking the flames of conflict. In Mali, the regional nature of terrorism and violent extremism in the Sahel presents challenges for the UN mission.

The protests amplify a growing sense of crisis in UN peacekeeping operations in Africa, raising vital questions about their future. Both missions have struggled to implement their mandates in the face of local resistance, little cooperation from host governments, and rising insecurity caused by insurgents and terrorists.

The demonstrations also expose the limitations of cardinal principles of UN peacekeeping, particularly consent, impartiality and the non-use of force. The consent of the main conflicting parties is essential to give peace missions legitimacy and freedom to implement their tasks. But that appears to be dwindling.

Solving the operational hurdles facing UN missions such as MONUSCO and MINUSMA requires political engagement between national and international actors and local civilians. This is vital to providing better protection, creating understanding and building confidence. Peacekeeping standards will need to be revised to incorporate these lessons.

As the UN crafts a New Agenda for Peace, the state of UN peacekeeping operations must be revisited. Guterres’s report recognises that collective peace and security are threatened by emerging risks, which traditional forms of prevention, management and resolution are ill-suited to resolve.

In amending the current peacekeeping approach, recognition must be given to the primacy of politics, the value of preventive diplomacy and a people-centred perspective. Planning for a New Agenda for Peace is a good starting point for revising principles and methods for effective peacekeeping.

This article is published as part of the Training for Peace Program (TfP), funded by the Government of Norway.

(The article was first published by ISS Today, a Premium Times syndication partner. We have their permission to republish).