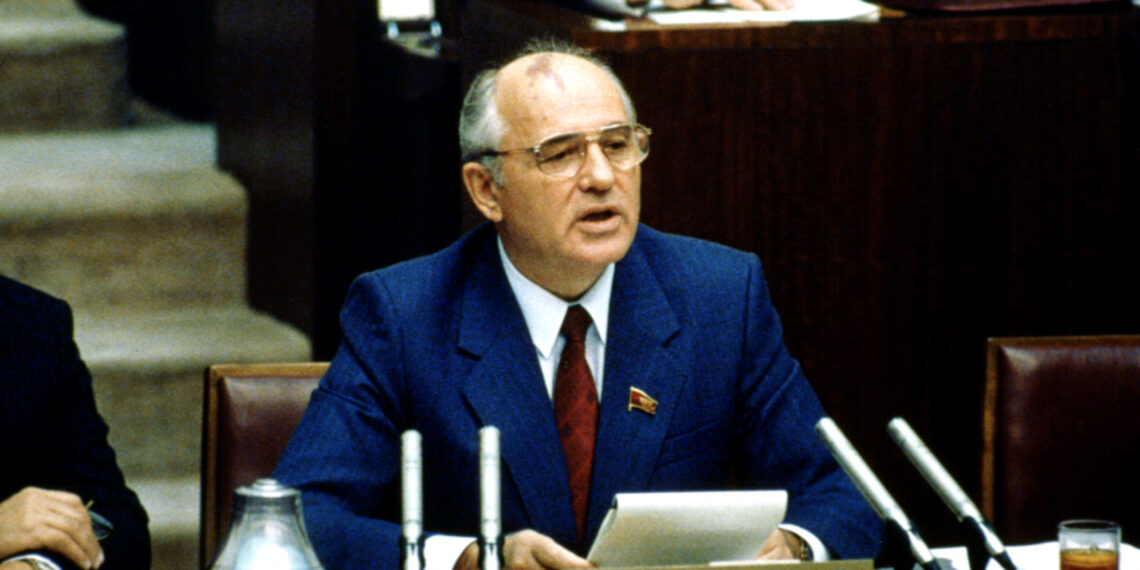 C13JB0 MIKHAIL GORBACHEV during his presidency of the USSR (PHOTO CREDIT: The Conversation)

It’s difficult to know how to assess Gorbachev given most of the things he set out to do didn’t actually work.

No other person but the final leader of the Soviet Union, Mikhail Gorbachev – who has died aged 91 – could bring to life the eternal debate on the role of the individual in history. Does real change happen because of impersonal structural factors, or because of individual choice by influential people?

For many years I thought that the end of the USSR was inevitable. But the more I’ve been reading and thinking about it, the less inevitable it seems to me. And so the role of Gorbachev becomes ever more significant for the two epochal events: the end of the cold war and the disintegration of the Soviet Union.

Historians still intensely debate the Soviet collapse. Some point to the long-term structural problems in the USSR from a lack of popular legitimacy of the Soviet rule and the simmering ethnic tensions, to the chronic inability of the Soviet planned economy to satisfy growing consumer demands and keep up the growth with the west.

But equally when Gorbachev came to power there still was a reasonably robust system in place which kept dissent at bay and maintained military parity with the west. In March 1985, when the general secretary came to power, there was nothing to suggest the collapse of the whole system was inevitable in six years.

Gorbachev wanted to reform the Soviet system, not destroy it. He started his economic reforms by investing huge amounts in heavy industry alongside partial liberalisation of small trade, while controversially cracking down on alcohol consumption. But all of these, apart from the hugely unpopular anti-drinking campaign, were half measures. All of them only made things worse.

Gorbachev’s economic reforms undermined the command economy discipline. The retention of price controls by the state and ban on private property meant what was left of the old state system functioned worse than before – while the new market one couldn’t take off either. The origins of vast illicit wealth, legalised under Boris Yeltsin, was thanks to perestroika, his restructuring of the economic system.

Running into severe economic difficulties, which were exacerbated by collapsing oil prices, Gorbachev decided to switch his focus on to political reform. The aim was to give the Soviet system more legitimacy through partial democratisation. Gorbachev always thought that his reforms faced danger from the conservatives within the Soviet apparatus. Yet, it was the democrats, led by Yelstin, who destroyed him.

Gorbachev ended up falling between two stools. His reforms were too much for the conservatives, but too little for the democrats. He created the office of president to preserve his power as the Communist Party’s authority was increasingly undermined through public debates, revelations about the Soviet past and the growth of national movements in ethnic republics. But he never dared to face a popular election and, as a result, always lacked popular legitimacy, which was ironic as this was the aim of his political reforms.

Instead, Yeltsin got a popular mandate with more than 80% of votes in the 1989 Russian elections. He emerged as an alternative centre of power with a mission to destroy Gorbachev – even if it meant dissolution of the USSR to boot.

In retrospect, it seems that Gorbachev simply didn’t understand how the Soviet system worked. He sincerely believed that it could be saved if he removed some elements such as the fear of repression and the command economy. But they turned out to be essential for its survival. Having removed them, the system unravelled as well.

Gorbachev emerged as the general secretary at a bifurcation point when the Soviet system was a crossroads. And he unintentionally tipped the balance towards its collapse. Judging on his own terms, he was a failure in the key task he set out for himself. He wanted to reform and improve the Soviet system, and instead he led it to its total disintegration.

The end of the cold war

The same sense of failure hangs over his foreign policy as well, which is where there is a huge gap in the western and Russian perceptions of his time in office. In the early 1980s, there was a huge build up of nuclear weapons in Europe with new intermediate missiles deployed by both the USSR and the US. Ronald Reagan’s “evil empire” reference to the Soviet Union was a reflection of the tensions and little room for compromise.

Gorbachev changed all that. Instead of a zero sum nuclear standoff, he wanted a new security based on shared interests and common values. Instead of security based on mutually assured destruction, Gorbachev offered one built on mutual trust. Just like in domestic reforms, the aim was not to give up Soviet power but to secure it on a new basis.

Key arms reduction treaties were negotiated with the US, including the 1987 INF treaty getting rid of all intermediate range missiles, and the START 1 treaty which drastically reduced US and Soviet nuclear arsenals signed in 1990.

In 1988, Gorbachev even announced a unilateral cut of 500,000 Soviet troops based in Europe.

In eastern Europe, the Soviet leader favoured a “Sinatra Doctrine”, named after the famous song, allowing the Soviet satellites to do it reforms their way and refusing to back Communist regimes with Soviet force if they didn’t reform.

Again, Gorbachev expected reformed socialist governments to survive with a new bout of legitimacy. But that was a gross misunderstanding of the nature of those regimes, which were maintained by Soviet forces and enjoyed little local support.

The collapse of the Berlin Wall and German unification which followed were the final nail in the cold war’s coffin. It is this legacy which continues to irk the Russian leaders from Yeltsin to Putin.

Gorbachev enjoyed significant leverage through Soviet legal rights in Germany and the troops stationed there. The Germans needed Soviet cooperation for unification to happen and were willing to give a lot in return, including promises of “not one inch east” for Nato after the reunification. But Gorbachev utterly failed to use his leverage and extract any legally binding guarantees over future military expansion. The Russian leaders who succeeded him – and Gorbachev himself in his memoirs – accused the west of betrayal.

But it was his own inability to get any official guarantees that lies at the heart of Russian complaints. The naked truth is that Gorbachev’s idealism in foreign policy, with his emphasis on mutual interests and common values, only works if both sides equally subscribe to those views.

Unlike his western counterparts who knew exactly what they wanted (a reunification of Germany on their terms, nuclear and conventional arms cuts while retaining the freedom to expand Nato further east), Gorbachev simply didn’t know what he wanted beyond a grand vision of world peace. In the end, he simply stalled for time and kept asking the Germans and Americans for more money while hoping multiple problems would somehow solve themselves.

Not surprisingly, the end of the cold war is seen in the west as its victory as was proclaimed by George Bush in January 1992.

Gorbachev wanted a new security based on mutual interests and common values, but ended the cold war as essentially a politely wrapped up defeat of the country he once led.

It’s difficult to know how to assess Gorbachev given most of the things he set out to do didn’t actually work. Should he be given credit for the unintended consequences of his reforms?

There were many who benefited from Gorbachev’s policies – above all the former eastern bloc countries who were finally able to rejoin their natural place in the west, the EU and Nato.

Many people in the former USSR – myself included – also benefited from the new freedom and opportunities offered by perestroika and Soviet collapse. But for many more people the dislocation of the late 1980s and the 1990s was a huge hardship.

The Russians still have wide economic and personal freedoms that were unimaginable under the USSR, but are also ruled by a new, still actually popular, authoritarian regime with ever decreasing political freedoms. Could the same have been achieved without the trauma of the collapse and the 1990s transition? Probably not, but many will disagree.

International security has been enhanced from the west’s point of view as now the Russians are fighting on the Dnieper in Ukraine instead of holding the line on the Elbe in Germany. But the chances of escalation into a direct war between Russia and Nato are much greater now than in the whole of the cold war: the “red lines” are blurred while there’s essentially an uncontrollable military escalation spiral in Ukraine.

And any direct conflict with Nato would most likely involve – given Russia’s inferiority in conventional arms – tactical nuclear weapons. All this after huge nuclear arms cuts in the late 1980s, which should really be Gorbachev’s central legacy.

Not entirely surprising, that Gorbachev’s current successor in the Kremlin only believes in raw power as the ultimate argument in international relations. This is a real tragedy too.

Domestically, Putin’s attitude is shaped by Gorbachev’s perceived mistakes. Reform and liberalisation can lead to state collapse. This happened twice in 20th-century Russia: in 1917 and 1991. So, in no small measure thanks to Gorbachev, Putin believes that not letting go of control is key to the state and regime’s survival.

Gorbachev is still a puzzle for me – not least of all because of the contrast between the astuteness with which he climbed to the top, and his utter naivety when he got there about the Soviet system as a whole and power in international relations. Yet, Gorbachev was the individual who brought down the USSR and without whom the cold war would not have ended.

The best summing up of Gorbachev’s legacy came from one his closest aides: Gorbachev was good as messiah but lost as a politician.

Friday Sermon: Say the truth any how bitter it is!, By Murtadha Gusau