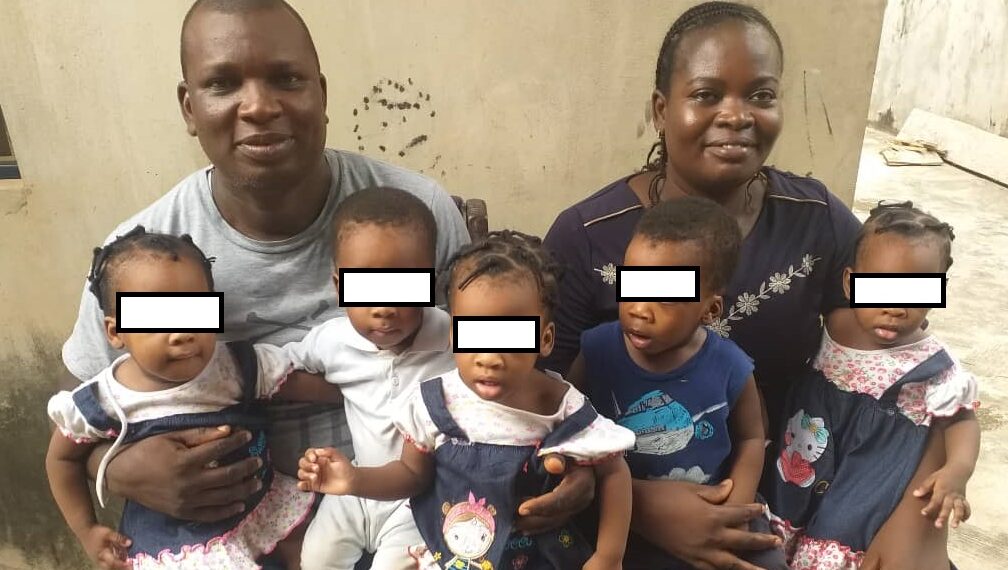 Man whose wife had quintuplets cries for help

“We have weathered the storm right from their childbirth but the heavy load is weighing us down.”

Ewanle Omage, whose wife gave birth to quintuplets last year, has asked for financial help from the Lagos State government and Nigerians as the children get set to be enrolled into kindergarten.

Mr Omage, a staffer of Rubber Research Institute of Nigeria, said the economic hardship in the country had made it increasingly difficult to cater for the five babies.

“We need help from individuals and the government at this stage,” said Mr Omage, a graduate of Agriculture from the Ambrose Alli University, Ekpoma.

“We have weathered the storm right from their childbirth but the heavy load is weighing us down.”

Mr Omage, who hails from Owan West Local Government Area, Edo State, married his wife, Foyeke, from Osun State, in 2014. But for the next six years, the union was not blessed with the fruit of the womb, leading to pressure from families and relatives.

“There were pressures from family members who questioned her ability to carry a baby,” Mr Omage said.

“It was even worse among her friends as they made fun of her but we kept our faith despite pressures to seek diabolical solutions to our childlessness. The seven years were like hell on earth as friends and family eventually gave up on my wife’s chances of having a baby.”

The couple’s joy knew no bounds when Mrs Omage eventually conceived in May 2020; Mr Omage, however, said the happiness was cut short in December of that year after a scan showed there were four babies inside his wife.

READ ALSO: Schooling in Nigeria a scam?, By Olabisi  Deji-Folutile

“I was shocked and I wondered how am I going to take care of them as a civil servant working in Benin but my wife kept on assuring me. She went for another test and was told another baby has been discovered and that they were now five,” said Mr Omage, whose work at the institute fetches him N75,000 monthly.

Although Mrs Omage, a graduate of the Obafemi Awolowo University, Ile Ife, has a First Class degree in Microbiology and a Master’s in Business Administration; she could not secure a good job. Before her pregnancy, she worked at a diagnostic centre where she earned N30,000 monthly.

Mrs Omage had the babies in January 2021 at the Lagos State University Teaching Hospital. According to Mr Omage, it was the hospital’s first set of quintuplets in 40 years. He said he was surprised the hospital did not make any attempt at publicity.

‘I really don’t know why the hospital kept newsmen away to cover the news because I needed the government to come to my aid,” he said.

“I was told by a security guard to run away because I won’t be able to handle the bill, but I swore never to leave my wife and my five kids.”

In the months that followed, Mr Omage routinely used journalists to appeal to the government and the public for help with hospital bills, attaching his phone number and bank details in several news reports.

“I spent over N300,000 on drugs, conducting tests on both mother and babies. We were allowed to leave LASUTH with an outstanding bill of N100,000,” he said.

Upon their return from the hospital, the couple faced a new challenge: fending for the quintuplets. Mr Omage said his employer allowed him to stay away from work for an additional six months.

“Taking care of five babies all alone has been more than stressful,” he said.

“Should I tell you the pain we go through when they cry at night? We usually use Molfix pampers which cost around N5,000 per pack and I can say we buy like ten cartons every month. I can’t really say where the money was coming from but it has been God who has kept us thus far.”

The couple said there was little financial help from their workplaces, so they resorted to writing to the Ministry of Women Affairs, the Lagos State First Lady, and NGOs but no one came to their rescue.

“ I wrote Ministry of Women Affairs, as well as Mrs Sanwo-Olu, but nothing was forthcoming,” said Mr Omage.

“I and my wife went to her office twice only to be told that the First Lady was not around. It was frustrating to see that the government just chose to abandon us to carry our cross.”

The quintuplets – Mary, Moses, Angela, Priscilla, and Miracle (three girls and two boys) – are now over one year and six months, and Mrs Omage said fending for them, thus far, has been a miracle.

“We use to buy ten cartons of baby milk every month which cost N158,000 before we improvised by mixing it with pap.”

Mr Omage said they have enrolled the kids at a daycare centre near their home, where they pay N10,000 for each of them monthly.

“That is the only way we can guarantee enough rest for their mother. We take them there by 8 a.m. and bring them back home by 6 p.m.”

But with the children ready to be enrolled in a kindergarten, Mr Omage said they would not be able to afford the fees.

“I know Davido will help me if he hears our story,” he said. “He is one celebrity with a kind heart and his kind gestures towards these speaks volume. We need help from individuals and the government at this stage. We have weathered the storm right from their childbirth, but the heavy load is weighing us down.”