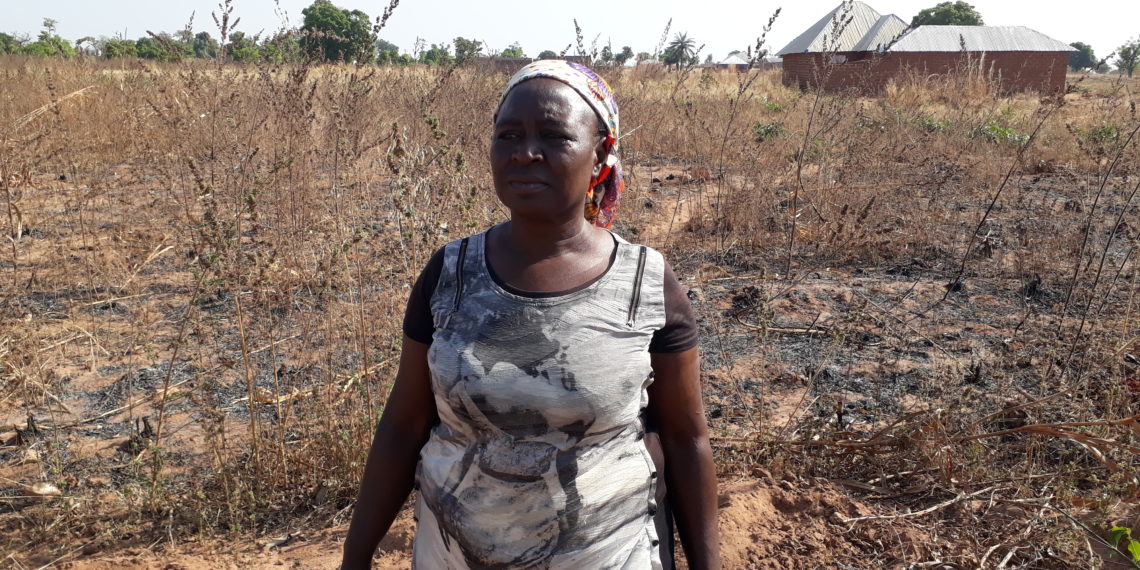 Susan Godwin standing on her farm

Women in Agriculture: How communal crisis set back my farming business — Farmer

Susan Godwin's farm was burnt down during a communal crisis and says restoring the farm has been an uphill task since then.

Susan Godwin was in Lafia in 2013, helping her daughter nurse her newborn baby, when she received the news that her house and 30-heactare farm back home in Tudun Adebu had been burnt down during an intercommunal conflict in Obi Local Government Area of Nasarawa State.

“I got a call from someone in the village that some people were burning houses,” the 60-year old woman recalled the incident to PREMIUM TIMES.

Ms Godwin’s family later returned to the village to rebuild their livelihood, until the community was again attacked the following year, forcing everyone to flee.

“A lot of people were killed and our house was destroyed. Thieves and herdsmen harvested everything on my farm. I also left my hand tiller behind on the farm.”

The incident forced her family to relocate to Lafia, the state capital. At the start of the rains in 2015, she met the traditional ruler (Mai Angwa) of the area she lives in Lafia, who gave her one and a half hectare of land to farm on.

“It is groundnut that grows well in this area, so I bought the seeds and after harvest that year I got eight bags.”

In 2016, she added sesame seeds and harvested two bags. With the proceeds, Mrs Godwin said she acquired more land and now cultivates a variety of crops. But it is a far cry from her old experience farming in peaceful times in her village.

Mrs Godwin grew up in a family where farming was the basic occupation. But after her marriage, she decided to try her hands on other things. Her husband, at that time a police officer, enrolled her at a training centre in Plateau State where she learned knitting. But she eventually returned to farming because she found knitting was not as lucrative as farming.

After her training in Jos, she relocated back to her ancestral community in Nasarawa to grow yam, groundnut, millet and rice.

She prospered in the business, harvesting thousands of yam produce and seedlings, and about 30 to 50 (100kg) bags of rice and 20 to 40 bags of groundnut and millet annually, she recalled.

Unlike some women who complain about lack of support on the farm from family members, Mrs Godwin said her husband and children helped her in the field.

But all that changed with the crisis in her ancestral area.

The crisis direly affected Mrs Godwin’s farming business. She no longer have her own land since leaving her own community but farms on six hectares of land she leased in different locations in the state.

And she now plants mainly groundnut, millet and maize because yam does not grow well in Lafia as in Tudun Adebu, her ancestral community.

Due to the small size of her farm, she cultivates rice basically for consumption. “I really want to go back to rice farming but I don’t have the money. I cannot get a land close to my house so I have to travel and other basic factors affect me,” she said.

In 2020, she harvested only six bags (100kg) of groundnut, four bags (100kg) of millet and five bags of maize. She said the late rains also contributed to the low output.

For the whole season, she said she recorded only N10,000 as profit, although her family consumed some of her produce.

“I have not achieved much in farming and I don’t think I can meet the target I set for myself,” she lamented. “Still, I love farming so much that I told myself that I will die as a farmer.”

Ms Godwin is a member of the Small-scale Women Farmers Organisation of Nigeria (SWOFON). She said the state government gives women farmers improved maize seeds, which slightly improved their harvest in 2020.

“Despite the lack of rain, the seeds grew well. If the rains were frequent, the crop would have done better.

“But we need more support from the government. I can’t even afford fertilizer now, I use animal dung to support my crops.”

ANALYSIS: 2023: Nigeria’s most consequential year since 1999

PT State of the Race: How presidential candidates plan to tackle insecurity in Nigeria

INTERVIEW: Why PDP will win in Kwara after ‘Oto ge’ – Bolaji Abdullahi