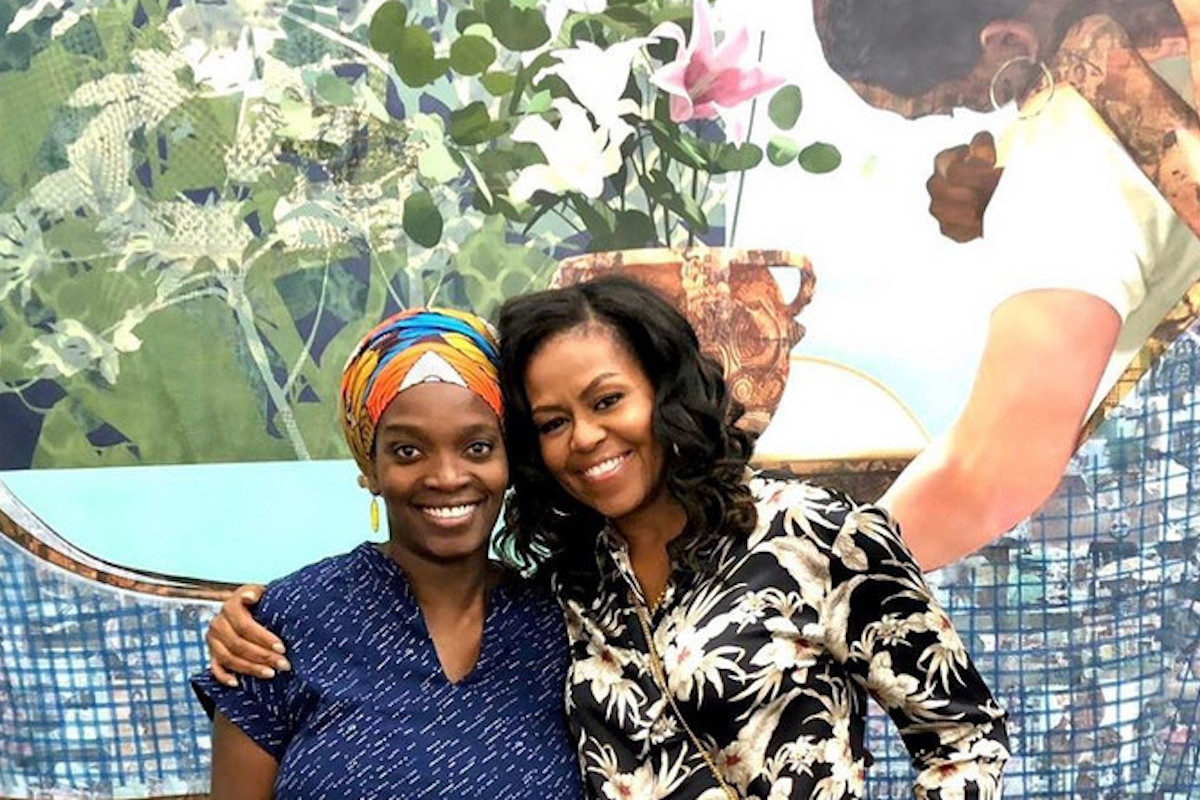 2019 proved to be a fruitful year in the Nigerian art and culture scene. More than ever, Nigerian artists and writers got the world’s attention big time. How can we fail to mention Michelle Obama’s visit to Nigerian artist, Njideka Akunyili-Crosby, right in her studio or the federal government’s resolve to ‘go after’ stolen artifacts worldwide?

There were many positive stories this year and a few of them are captured in this article.

The young artist uses charcoal and pencil as the medium of choice for his paintings.

He sketched a stunning portrait of French President, Emmanuel Macron, on the spot in just two hours, which amazed the global media. He is now a famous Internet artist.

Using his impressive talent, Olamilekan beat all the participants to clinch the 22nd Fervent Global Love of Lives Award; a top Taiwanese award.

In November, a 41-year-old Nigerian author, Chelochi Onyemelukwe-Onoubia, clinched the award for best fiction writer at the Sharjah International Book Fair, in the United Arab Emirates.

Onyemelukwe-Onoubia, whose debut work, ‘Son of the House’, won in the best fiction category, was honored by the Ruler of Sharjah, Bin Mohammed Al Qasimi, at the opening ceremony of the event.

The award-winning novel, Son of the House, centres on struggles of womanhood and parenting amidst sexual abuse and societal pressure in marriage.

Peter Kimani, Chair of Judges, announced Lesley as the winner of the £10,000 prize at an award dinner this evening (Monday 8 July).

‘Skinned’ envisions a society in which young girls are ceremonially ‘uncovered’ and must marry in order to regain the right to be clothed. It tells the story of Ejem, a young woman uncovered at the age of fifteen yet ‘unclaimed’ in adulthood, and her attempts to negotiate a rigidly stratified society following the breakdown of a protective friendship with the married Chidinma.

Arimah is a 2019 United States Artists Fellow in Writing.

In July, a British-born Nigerian writer, Tade Thompson, won the Arthur C Clarke award, the UK’s most prestigious prize for science fiction novels, at a ceremony in Foyles bookshop in London.

Thompson’s novel, Rosewater, an alien invasion novel set in a future Africa, was submitted alongside 124 other novels, the highest number ever submitted for the prize, to emerge as the winner.

Both the winning manuscript and the finalist will be published as part of the American Reader Series. ‘The Complete Writings of Art Smith, The Bird Boy of Fort Wayne,’ Edited by Michael Martone will be the second BOA Short Fiction Prize finalist to receive publication in addition to the winning manuscript. E.C. Osondu is the author of the collection of stories ‘Voice of America’ and the novel ‘This House is Not For Sale.’ In addition to the BOA Short Fiction Prize, he is a winner of the Caine Prize, a Pushcart Prize, and a Pushcart Special Mention, among other awards.

The U.S. based artist is one of the daughters of the late Dora Akunyili, who was the Director-General of National Agency for Food and Drug Administration and Control.

In July, Toyin Odutola became the third highest-paid Nigerian artist of all time after her drawing, ‘Compound Leaf’ sold at the Sotheby’s for £471,000 (roughly N215 million).

Due to the shock of this transition, she used art as a coping mechanism, and over time, it transformed into an “investigative, learning activity” for her.

Speaking with Vogue about how art helped her escape, Odutola said, “I was obsessed, capturing everything I saw and being fascinated with the incredibly simple task of looking at something and transmitting it onto paper. It’s immediate magic.”

In October, a recently found Ben Enwonwu painting sold at seven times its valuation for $1.4 million (about N507.4 million).

The portrait, Christine, was by one of the most revered African artists of the 20th century, Ben Enwonwu. The captivating sitter was Christine Elizabeth Davis, an American hairstylist of West Indian descent. The painting was completed in under a week as Christine was able to hold her pose for as long as needed. Christine, who was in her mid-30s at the time, passed away in Texas. But the painting remained in the family. Just three months ago, it was valued by Sothebys at around $200,000, and sold in London for over seven times the estimated price at $1.4 million.

His best known portrait, Tutu, often dubbed the ‘Nigerian Mona Lisa’, was sold at a record $1.6 million in 2018.

In November, the federal government pledged to use all “legal and diplomatic instruments” to demand the return of Nigeria’s stolen artifacts and cultural materials worldwide.

The Minister of Information, Lai Mohammed, announced this in Lagos.

The development came on the heels of an announcement by a Cambridge University college that it would return a bronze cockerel statue looted from the former kingdom of Benin by the British in the 19th century.