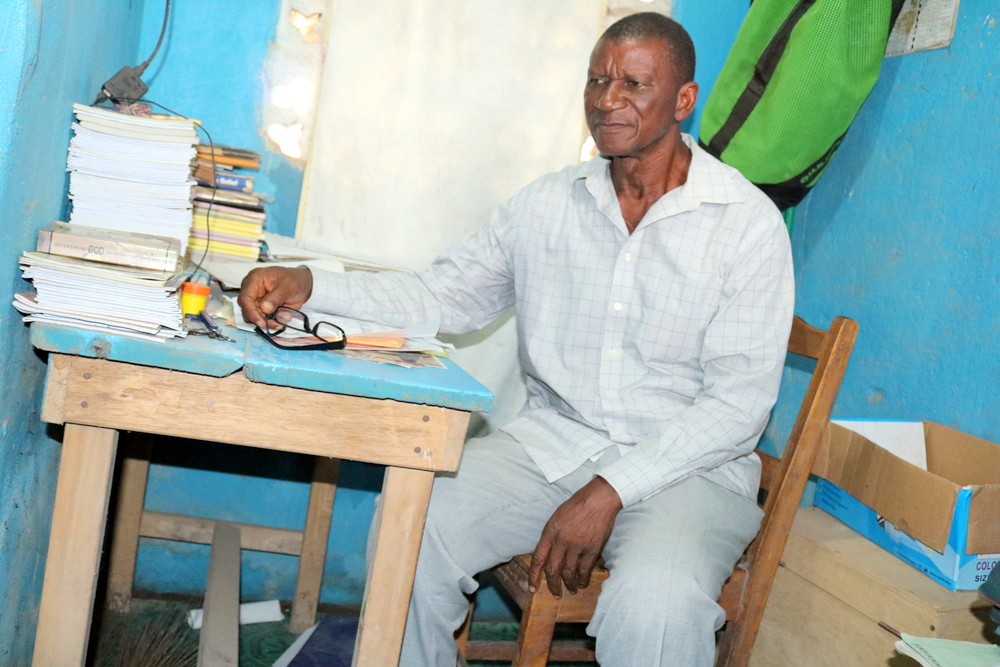 Koroma in his office at Alagendra Secondary School

FEATURE: An encounter with Sierra Leonean who saved 87 child soldiers

Edmund Kaszibuloh Koroma, a Sierra Leonean who took the risk of leading 87 former child soldiers who were wanted by rebels has revealed what inspired him to offer such humanitarian service.

Sierra Leone’s 11-year civil war (1991-2002) that killed over 50,000 people is regarded as one in which some of the biggest human rights violations were committed.

According to Human Rights Watch, hundreds of underage girls were captured, raped and camped as sex slaves in bushes.

Communities were invaded, aged men and women brought out of their homes, either slaughtered with knives, shot at or simply burnt with their houses. Arms and lower limbs of hundreds of armless civilians were chopped off.

Insurgents under the Revolutionary United Front, a rebel group that started the war for political reasons, perpetrated the acts.

Particularly, half of the rebel fighters were children captured as their communities were invaded. The children, some as young as five, were deprived of their normal childhood experience after being indoctrinated and trained to kill their compatriots using guns, machetes and locally made explosives.

“At the time, I was just five when our town, Kamakwie (in northern Sierra Leone that was mostly controlled by rebels), was invaded. Fifty-two houses were burnt and I was captured by one of the rebel commanders,” recalls David Sesay, who joined the rebels at age five and fought as a child soldier until he clocked 10.

Amid such atrocities, Mr Koroma, in May 2000, led 87 former child soldiers and sex slaves away from rebels-controlled Makeni – a city in northern Sierra Leone – to government-secured Freetown (Sierra Leone’s capital) in a five-day trek via bush tracks.

Then, he was employed as manager of an Interim Care Center (ICC) set up in Makeni by a Roman Catholic charity – Caritas – where nearly half a thousand former child fighters were being rehabilitated. His duty included child safety, rehabilitation and distribution of relief materials to displaced persons.

The rebels had earlier, during a short-lived 10-month peace pact (1999-2000) between government and rebel leaders, released and allowed some former child combatants to undergo rehabilitation at the ICC following calls from local and international human rights groups that rebels-held child fighters should be released so they could continue their education, which was being stymied by the war.

Later, the rebels violated the peace accord and started fighting again. They then went to the ICC and took some 40 child soldiers back to the battlefield. They returned subsequently threatening to take more children. Almost always, Mr Koroma pleaded and pacified them with food, cash and whatever material things he could afford.

At some point, Mr Koroma perceived his repeated pleas were not going to stop the rebels from making good on the threats, so he started sending the children in batches to Freetown through trucks that were going to capital.

And when he could no longer sight trucks as the war grew tough, he took 87 child soldiers who were remaining at the center in a hide-and-run five-day journey through bush tracks until they miraculously arrived Freetown afoot. The feat sparked jubilation in Freetown and earned Mr Koroma local and global applauds.

Mr Koroma, a staunch Catholic, said what inspired him to save the child soldiers and do other humanitarian works is a dream he had more than 35 years ago while sleeping at night.

In the dream, he saw a sudden bright light exude from a portrait that hung on the wall of his room. It was the portrait of the first bishop of the Catholic Diocese of Makeni. The bishop was Augustus Azzolini, an Italian.

The flash piqued his curiosity and as he drew closer, it shimmered a second time, even more brightly. By the third sparkle, “I saw Jesus walking down,” the 65-year-old recollects. “He said to me, ‘I bless you!’”

Mr Koroma said he stood shaking and bewildered as Jesus added, “You must be faithful!” and disappeared.

He said he interpreted the dream to mean a call for humanitarian service and a warning to stay strong in his Christian faith. Since then, he has committed himself to child safety and provision of access to education to poor and vulnerable children in Sierra Leone.

“Looking at the past and the support he was giving us when we were at the ICC, we didn’t see him as a worker; we saw him as a father,” says Sesay, the former child soldier who joined the rebels at age five and was later under Mr Koroma’s care at the ICC.

Today, Mr Koroma runs a secondary school in Makeni and its current 280 poor students attend the school free of charge. He started Alagendra Secondary School in 2005 and about 1000 children have already graduated from the school.

Until August last year when the government of President Julius Maada Bio declared free education for pre-primary, primary and junior secondary school students, tuition fees in both public and private schools were too expensive for the majority of parents to afford in a country where a weak economy has kept over 60 percent of the 7.9 million population below the national poverty line ($1.25 per day) and way down World Bank’s $1.9 benchmark.

This factor, coupled with the destruction of 1,270 public primary and secondary schools during the civil war, for years, hindered access to education; causing literacy rates to sit below average – 48 percent.

The Ebola outbreak (2014-2015) that killed over 11,000 people in West Africa, about 4,000 of which were Sierra Leoneans, further kept children away from school for fear of contracting the deadly virus, which is spread through contact with affected people and animals.

Mr Koroma played a bridging role with his school, making it possible for such poor children to access education free. Even now, government’s free education program does not include children in senior secondary – which is a key stage in children’s educational development – and Koroma is glad to continue closing the gap.

“We are happy because this is what God has called us to do. And there is so much we want to do for our children,” he said.

His teachers, including Sesay, the former child soldier, work mostly voluntary. They however receive stipends monthly. Koroma relies majorly on donations from Alagendra Foundation, a non-profit whose founder – Shyamala Alagendra – he named the school after, to sustain the school financially.

He also explores other revenue options to meet extra costs, which include plunging half of the proceeds he gets from his small ginger farm and palm plantation into running the school.

In 2015, Mr Koroma, who has been a professional teacher and psychosocial counselor for more than 35 years, emerged one of 10 top finalists for the Aurora Peace Prize, an award given by the Republic of Armenia-based Aurora Humanitarian Initiative to global characters whose initiatives are lifting the lives of vulnerable people.

He feels his dream-inspired humanitarian efforts require him to constantly stay sustained through some spiritual means. And so he wakes up 4:30 every morning to pray, after which he spends one hour to read at least one chapter from the bible.

[NOTE: This article was produced with the support of the USC Center for Religion and Civic Culture, the John Templeton Foundation and Templeton Religion Trust. Opinions expressed do not necessarily reflect the views of these organizations.]