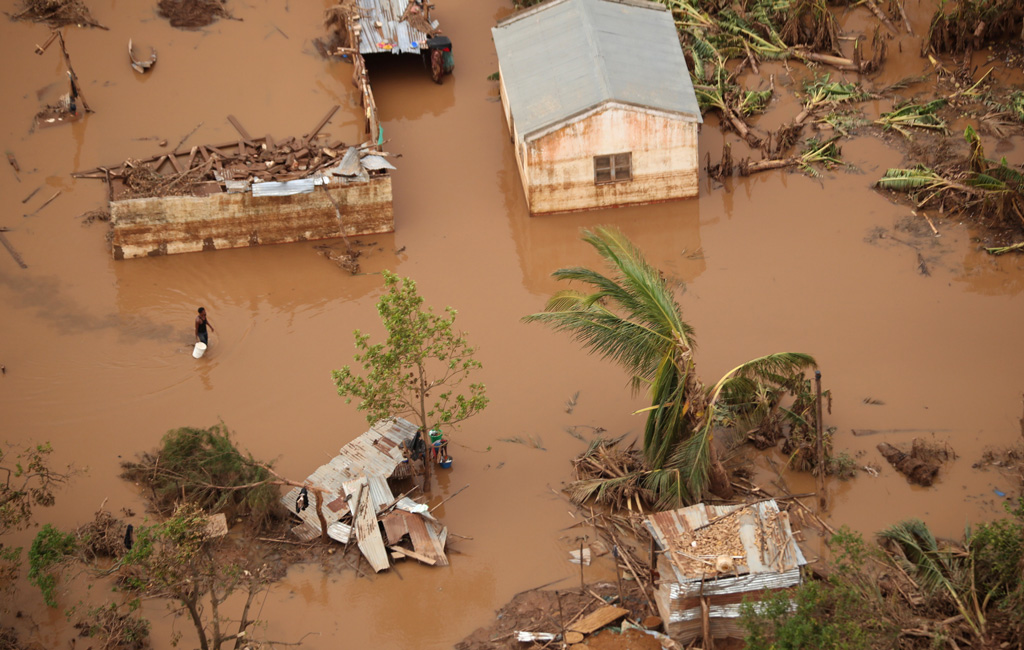 People walk through floodwater near Beira, Mozambique, in the aftermath of Cyclone Idai, March 23, 2019. REUTERS/Mike Hutchings

“We will have cholera, we will have malaria. It’s unavoidable in this situation, so the government is opening a cholera treatment centre already,” Minister of Land, Environment and Rural Development in Mozambique, Celso Correia.

Tropical Cyclone Idai struck the coastline of Mozambique between March 14 and 15 this year. The devastating tropical storm made its way across Mozambique with heavy rain and strong winds into two neighbouring countries, therein devastating Zimbabwe and Malawi as well, affecting millions.

Hundreds of people have already lost their lives in the aftermath of Cyclone Idai and, as the death toll is still on the rise, there is an even greater number of displaced people to contend with.

Recent reports from the Ministry of Land, Environment and Rural Development in Mozambique declare that 417 citizens of the country have lost their lives since the storm struck, a significant rise from the initially reported number of 242. While in the neighbouring country of Zimbabwe, 259 Africans have reportedly lost their lives to this tragedy. The storm has also resulted in a further 56 deaths in Malawi.

This, collectively, is about 700 deaths in total across Mozambique, Zimbabwe and Malawi with many more injured, displaced and forced to wait in poor living conditions. It is important to note that the authorities have stated that these numbers are “preliminary” as the Minister of Land, Environment and Rural Development noted that once the flood recedes, more bodies might be discovered.

In the wake of this tragedy, public health is at the forefront. Many water-borne and vector-transmitted diseases, which have a pre-existing status and are already endemic in these African countries, have the potential to take even more lives, here.

These typically preventable diseases are exceedingly challenging to contain in disaster-torn areas, particularly, in developing countries where existing health systems are sub-standard. The United Nations International Children’s Emergency Fund (UNICEF) has already warned of these public health concerns as the flooding, culminated with overcrowding in shelters, poor hygiene levels, stagnant water and infected water supplies will put many at risk of diseases such as cholera, malaria and diarrhoea.

During her visit to Beira, one of the worst-hit areas, the Executive Director of UNICEF, Henrietta Fore, raised the issue of the health implications the cyclone will have on the people. “While the search and rescue operations continue, it is critical that we take all necessary measures to prevent the spread of water-borne diseases which can turn this disaster into a major catastrophe,” she cautioned.

“There is growing concern among aid groups on the ground of potential disease outbreaks… Already, some cholera cases have been reported in Beira along with an increasing number of malaria infections among people trapped by the flooding,” said the International Federation of the Red Cross and Red Crescent Societies (IFRC).

Cholera, a water-borne disease which is characterised by diarrhoea, is exacerbated by poor hygiene conditions and becomes life-threatening if left untreated. Cases of cholera have been confirmed as a result of cyclone Idai. This, according to the Executive Director of UNICEF, can be attributed to “stagnant water, …, decomposing bodies, lack of good hygiene and sanitation”.

Prior to the current events, cholera had been prevalent in Mozambique. According to WHO, 1799 cases were reported in the most recent outbreak that occurred from 14 August 2017 to February 2018. In spite of the high numbers, the case fatality was 0.06%, as only one death occurred. The health ministry in Malawi reported that in a cholera outbreak that started in November of 2017, 893 cases were reported with 30 people dying, as a result. According to WHO, Zimbabwe’s most recent cholera outbreak in September 2018 resulted in 8535 cumulative cases as well as 163 laboratory-confirmed cases with 50 deaths; a 0.6% rate fatality.

Concerning malaria, this is expected as the aftermath of a storm provides a suitable breeding ground for mosquitoes. According to the WHO, malaria was already the leading cause of death in Mozambique, with the country being home to the third highest cases of malaria in the world.

Furthermore, the danger of food insecurity, which is typical in disasters like this, worsen health concerns for people in the area. Food shortages have already been reported as the heavy rains and floods have washed away, and damaged crops grown in some of these regions.

The UN Secretary-General, Antonio Guterres, reiterated these concerns in a statement where he said: “with crops destroyed in the breadbasket of Mozambique, more people are at risk of food insecurity in all three countries.”

Access to safe drinking water is also a problem that has been reported in Zimbabwe as Medecins Sans Frontières has noted that pipes have been washed away in some of these regions. In Mozambique, the water supply system in cities has been damaged and as a result of this, people are being forced to drink from contaminated wells or stagnant water.

The health implications of food shortages include a hunger crisis and malnutrition, especially for children, pregnant women, sick or disabled persons. These implications are imminent as the UN’s World Food Programme (WFP) declared this disaster a level three emergency, likened to the circumstances of Yemen, Syria and South Sudan. According to the United Nations Population Fund (UNFPA), Cyclone Idai has already put 75,000 pregnant women at risk of life-threatening complications as 45,000 births are expected within the next six months in the current conditions.

Moreover, the effects of the disaster such as death, displacement and destruction of property, have devastating psychological impacts on the affected individuals. Hence, in the aftermath of Cyclone Idai, mental health and psychological support from trauma will be relevant.

In summary, to prevent what the WHO has referred to as a “second disaster” from the “serious disease outbreaks or inability to access essential health services,” action from the respective governments and the international humanitarian community is of crucial importance.

The WHO estimates that at least $38 million is needed over the next three months in Mozambique, to cover health responses to Cyclone Idai.

In due course, however, the health systems in Mozambique, Zimbabwe and Malawi will likely have to deal with gross understaffing from death and displacement of personnel; limited health financing due to a shift in priorities from health resources to other sectors and a breakdown in the leadership and governance of the health sector. In addition, the disaster will have an overall impact on health service delivery as the minimum standards in quality and accessibility become sparse.