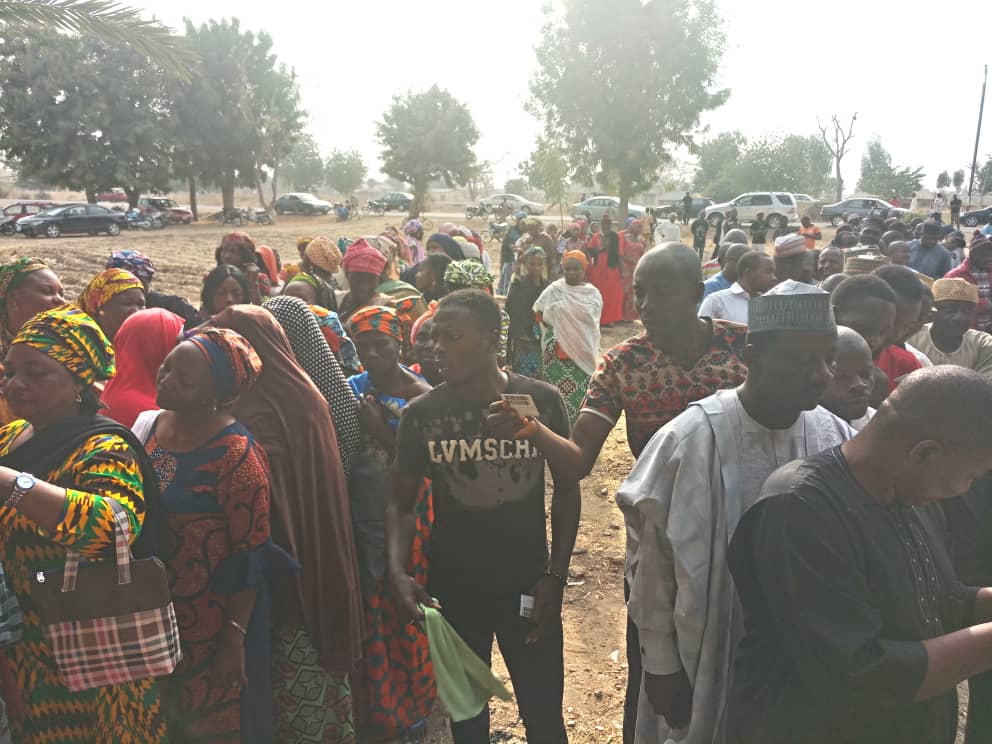 Voters ready to cast their ballot

Nigeria just concluded her presidential and National Assembly elections and there have been accusations and counter accusations of rigging among political parties.

These accusations come mostly from parties whose candidates lost in the elections.

A typical example is the main opposition party, Peoples Democratic Party (PDP) which has accused the ruling All Progressives Congress (APC) of rigging the elections.

The party, its presidential candidate and leaders had accused the APC of rigging even before the final election results were announced by the Independent National Electoral Commission (INEC).

They have already gone to court and also demanded the release of election materials from the electoral commission.

Election observers like the Centre for Democratic Development (CDD) also said the February 23 elections were marred by widespread irregularities such as logistics failure, misconduct and poor technical know-how of INEC’s ad-hoc staff and security lapses.

From PREMIUM TIMES’ observation of Nigeria’s most recent election, here are ten possible ways politicians seek to ‘rig’ election in the country:

Ensuring that polling units in your opponent’s area are flooded with armed military personnel is one of the ways to rig elections in Nigeria.

This will not only result in voters’ apathy, it will instil fear in the minds of the electorate who may eventually not turn out at the polling units to vote.

In the just concluded elections for instance, there were reports of clashes between army officials and suspected thugs. Nine persons were reportedly killed (including a soldier).

Creating tension in areas like this can lead to cancelation of elections in that location and hence, less votes for your opponent – which reduces his/her chances of winning.

2. Ensure late arrival of materials in your rival’s polling unit

By making sure election materials arrive late at your opponent’s polling unit, his/her votes will be drastically reduced.

This way, many voters on the queue will not be able to cast their votes once the time frame for voting elapses. Also many potential voters will return home in anger without voting.

This was the case in many polling units across the country and there were similar lamentations from the electorate as well.

Even though the electoral commission extended the time for voting on election day, the information did not get to so many polling units on time, and even in polling units where the voting time was extended, many voters ended up not voting.

As a result, many people were disenfranchised.

While INEC is solely in charge of distribution of materials, it relies on transport unions to provide vehicles and drivers. Many of these transport unions across states are on the payrol of politicians who can thus control the process.

Another way to rig election in Nigeria is by threatening the electoral officials especially the Returning Officers who are in charge of announcing the results.

This is easier when the “rigger” of the election is one of higher authority and from a strong political party. It is also easier if you are an incumbent governor or lawmaker or a top former political player.

The case of Imo West senatorial election comes to mind when the outgoing governor, Rochas Okorocha and other candidates stormed the Imo West collation centre in Orlu after the Returning Officer for the district, I.I Ibeabuchi halted the collation process.

Mr Okorocha, a senatorial candidate of the APC arrived the centre in an attempt “to convince the officer to continue the process.”

Hours after he declared Mr Okorocha the winner of the senatorial district, Mr Ibeabuchi said he was forced to declare the result.

Tampering with the mode of transportation of materials and electricity, changing the venue of collation centres and delaying the time for collation of results are other possible ways to rig election in the country.

Also, the ‘partnership’ between the National Union of Road Transport Workers (NURTW) and INEC is an easy way to rig the election as most of the NURTW officials are known to be foot soldiers of politicians.

This involves bribing the ad-hoc staff of the electoral commission with money and properties. One can also makes promises of appointments and provision of jobs to the officials if they play along in the rigging plan.

Also, bribing the corps members involved in the electoral process is an easy way to rig. The corps members, most of whom are vulnerable and desperate to make quick money, often fall prey to offers of huge amount of money.

An example is the case of former petroleum minister, Diezani Alison-Madueke, who had given a N30 million bribe to an INEC staff to compromise electoral officers ahead of the 2015 general elections which the then ruling PDP still lost to the now ruling APC. Many such comprises were also witnessed in the February 23 election in states like Rivers.

6. Snatching of ballot boxes/papers in your rival’s polling unit

This is one of the most common ways to rig any election in Nigeria.

As a candidate who wants to rig an election, all you have to do is get thugs to storm the polling units and cart the ballot boxes in the polling unit where your rival will likely garner more votes.

This act will cause the electoral commission to cancel election in that polling unit thereby, cancelling all votes that he/she (rival) would have gained.

INEC for instance, cancelled elections in Isolo, Okota areas of Lagos State due to snatching and burning of ballot boxes by hoodlums who invaded the polling unit. That area was considered a stronghold of the opposition party ib Lagos.

Elections were also cancelled in some parts of Rivers and Anambra states for similar reasons.

This is similar to the snatching of ballot boxes only in this case, the thugs invade the polling unit and not only destroy election materials but also attack the electorate and INEC officials causing everyone present to flee for safety – as were the cases in Lagos, Akwa Ibom and Rivers states.

Creating violence of this manner can make the electorate scared and cause low turnout of voters in the polling unit which will eventually affect the result of your opponent.

This is another assured way to rig elections in Nigeria. It goes hand-in-hand with compromising electoral officials and INEC’s logistics process as they all have a role to play.

It involves changing the figures of the original results brought from various wards to the collation centres – with the help of your party agents and INEC officials (who have agreed to be on your side). It is quite a difficult mode though.

This way, the figures are changed in your favour and when the results are finally announced, you emerge victorious.

This is probably the cheapest way to rig election in Nigeria as the electorate, many who seem to care less about the impact of their actions on election day, are often ready to sell their votes for money (or food item – as the case may be).

All a candidate needs to do on election day is have his/her party agent arrive at the polling unit and distribute money and/or food items to voters who have come out to vote. The voters will in turn, vote in favour of the politician.

The electorate in rural communities often fall prey to vote buying as many of them are often desperate for what to eat.

10. Get your name announced by ‘hook or crook’ and let your opponent go to court

Now, this is the smartest way to rig an election in Nigeria, one that many Nigerian politicians have now adopted.

This way, a politician knows that the judiciary system can be compromised and the case can be ruled in his/her favour.

There is also the relief that cases (especially election cases) takes an eternity before it is resolved in court.

For example, there are many cases from the 2015 general election which are either still pending in court or have just been resolved.

The Anambra Central senator, Victor Umeh, was only sworn-in in January 2018 after election in the district was cancelled in 2015.

After a legal battle which lasted for over two years, he was declared winner of the district after a fresh election.

A similar scenario has played out in Abia State where a former governor was declared winner of a senatorial election against INEC’s own regulations. His opponent, no matter the substance of his case, now has to go to court.