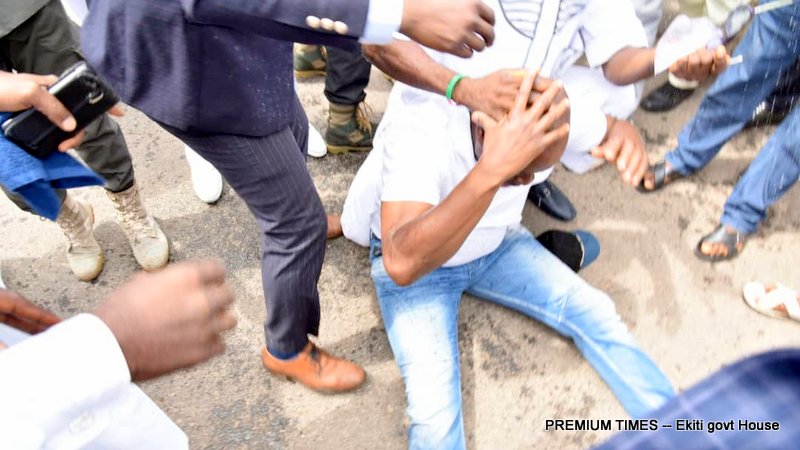 A photograph showing Ekiti State Governor, Chief Ayodele Fayose on the ground after he was attacked with tear gas and beaten by security operatives

Penultimate Wednesday, about three days before the Ekiti gubernatorial election held, Ayodele Fayose, the garrulous governor of Ekiti State, broke the internet when clips of him shedding tears surfaced online. In the clip, which had gone viral before noon that Wednesday, the man who loved to be addressed as “Peter the Rock” by his admirers and other associated sycophants continuously wailed like a toddler.

“I am in pains,” he said at a point, “I am in severe pains”. Addressing reporters, Mr Fayose said he was in pains after he was “shot at” and manhandled by security agents he claimed were carrying out the directives of the ruling APC. At some point, Mr Fayose threw caution to the wind, making no pretense to gubernatorial decency.

Mr Fayose, never to appear on screen without theatrics, thereafter wobbled away from camera with bandages on his right arm and a neck brace. His spokesperson, Lere Olayinka, had earlier claimed that his principal lost consciousness and was taken to government jouse clinic after policemen fired teargas canisters into the Government House.

Fayose’s theatrics, for the most part of the weekend, provided ready-made comic material for Nigeria’s legion of jesters, both online and offline. By Saturday, there had been more than a dozen “Severe Pain” video clips floating across the sea that is cyber Nigeria––on Twitter, on Instagram, on Facebook and elsewhere.

If Fayose’s un-gubernatorial theatrics provided comic relief for Nigerians, it turned out to be a mere rehearsal to a major pathetic performance reserved for the election day. But this time, it wasn’t just about Mr Fayose; it was about the do-or-die gene in the Nigerian politician which the two major political parties in the contest––the rampaging All Progressives Congress and the epileptic Peoples’ Democratic Party––exhibited as seen in the massive vote-buying that characterised the exercise.

Even though the two major political contenders presented by the two parties came on board with enviable academic credentials, a development that prompted the huge expectations that preceded the electioneering period, both candidates threw away their PhDs and went for “gutter” tactics. Of course, the justification was that in the end, it’s a winner takes all contest.

First, a campaign period that observers imagined would be characterized by exchange of ideas and issue-based debates about the future of the state turned out to be a period of mindless propaganda and spread of ‘fake news’, especially on the part of the two major parties. Worse still, a day or so before the election, the debate put together by a civic group, Enough Is Enough, was shunned by both candidates––even when others from obscure parties attended.

Kayode Fayemi, said to be urbane and far-detached from peoples’ realities at the grassroots in his first coming, was pre-occupied with the desperate desire to avoid a second humiliation and thus spent time scheming and showing people at the grassroots that he now understands what it means to be ‘street-savvy’. He gave the first sign when he, surprisingly, won the APC primary against all odds and was quoted to have made reference to the street slang “Sha-pra-pra” during one of his campaigns.

Olusola Eleka, the professorial proxy with whom Fayose seemed determined to actualise a third term gambit, was way too preoccupied with research works on how best to prostrate sheepishly before one’s benefactor that he nearly forgot in was actually in the race. So invisible was he that even when a chieftain of the APC accused him of not writing any academic paper, he was on his knees inside government house and never bothered to clarify what turned out to be outright lies.

So in the end, Ekiti people went to the polls without anyone having an idea of what the major contenders had in stock for them. But as things turned out, the people themselves knew it was cash, raw cash, and they did harvest it last Saturday at the poll. By the time the dust would settle, more than a billion naira had exchanged hands in a contest that was bereft of ideas and watered with questionable money.

But the signs are eerie if a few concerns are dissected: First, on the one hand, the Fayose-led PDP government that had, for a few months now, found it difficult to pay salaries reportedly doled out as high as N4,000 to voters. On the other hand, the APC and Kayode Fayemi, who served recently as mines minister, also doled out as high as N5000 to voters, according to reports. In all these, there is the one rational question: where are these monies coming from?

In essence, beyond the post-election hoopla generated by the rift between the political gladiators, one hopes that the people of Ekiti, reputed to be one of Nigeria’s most educated people, and having exhausted the pot of soup prepared with the ‘electoral fortunes’, would have come to terms with the reality of the choice they made on Saturday. While one cannot discountenance the influence of poverty in the whole Ekiti money bazaar––now dubbed “See and Buy” ––one hopes that such anti-democratic template would not be replicated in other elections.

SATIRE SATURDAY looks forward to how the state and its people would wriggle their ways out of the huge I-O-U they incurred on that Election Day. In the meantime, would it be out of place to parody the outgoing governor and ask, out of genuine curiosity: Isn’t Ekiti treasury in “severe pain” already?

Ex-House of Reps members decamp from PDP to APC