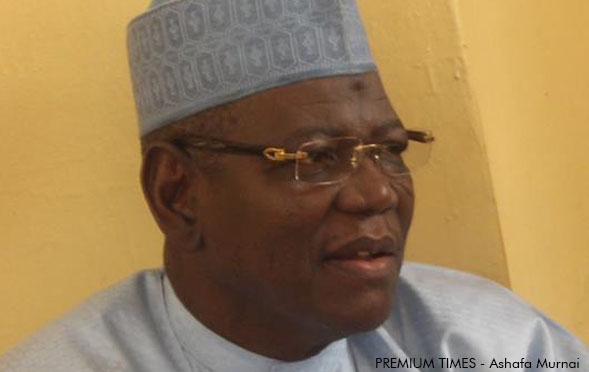 A former Jigawa State governor, Sule Lamido, recently wrote members of the Peoples Democratic Party on his intention to seek the presidential ticket of the party for the 2019 General Election.

In this interview with PREMIUM TIMES Hausa, Mr. Lamido explained why he wants Nigerians to consider him a better alternative to incumbent President Muhammadu Buhari of the All Progressives Congress.

PT: Just about two weeks ago, Nigerians were made aware of your letter to PDP faithful, where you formally disclosed your interest in the presidential ticket of the party. Why did you take that approach?

LAMIDO: African party draws its kind of authority, supremacy and its goodwill from the supporters. In whatever the party does, party faithful are very important. So by my political culture, tradition and political upbringing, the party is very critical. So I said that for us to be able to pull Nigeria out of this political despondency, political ambivalence and political fear, we must first of all intimate these to the party faithful. That means each card carrying member in Nigeria should be informed that I am running.

It is a kind of family affair that I’m offering myself. So if they find that I’m worthy, because I believe that we share the same concern for this country, we also share the same vision.

You see, the way things are in this country, APC cannot keep Nigeria united. I am not being critical, but if you analysed what is going on today, compared to three years ago, you can see the concern in Nigeria.

I also know that many others will also join the race. But what is important for us to know is that, in whatever we do, we restore that thing called trust in the party. We should also put Nigeria first.

At the end, whoever should emerge from the party as candidate after primaries should be a candidate who is owned by PDP, who knows PDP and who PDP people knows.

By so doing, the PDP can face Nigerians and say this is what we are giving you, and we are giving you the best. Because I have been saying that we have to do things right, otherwise by 2019, there will be serious problem in Nigeria. PDP is the only party with the capacity, with the cohesion, with political root, with that kind of passion for Nigeria.

Look at the way it was founded in 1998. PDP is not something that fell from the sky. It was as a result of a process of reflection, understanding, and research.

PT: You are one of the engineers and architects of the formation of PDP as a political party. Are there some untold stories about that development which are not yet known by Nigerians?

LAMIDO: I don’t think there are more untold stories of how PDP as a party was formed.

PT: Some of the party members who left PDP are now planning to return, and most of them are people who have presidential ambition. We are specifically told that former vice present Atiku Abubakar will return, but he wants the assurance that he will get the ticket. What do you think?

LAMIDO: Look, at the time they left the party, there were indeed some worries within the party. That kind of worries and concern were raised by the seven governors who formed the nucleus of, not opposition really, but maybe raising the alarm that there is problem in PDP. In so doing, we went and toured the whole country if you can remember. We told all our political leaders like Chief Olusegun Obasanjo, Alex Ekweme, TY Danjuma, Shehu Shagari, Babangida and many others.

We told them look, what we are facing in PDP may likely endanger Nigeria’s stability and security in future. It is beyond PDP.

Somehow, others left in the process. We lost five governors, some parliamentarians, some key members of our party joined other parties.

Now, having gone where they went, have they got comfort? Have they been consoled? Have they been rescued from what they were running away from? Let them come back. They are most welcome. They are coming back to their own party which they left. PDP is their home. But APC is a house which is rented for anybody who wants to be there for a while.

Whatever they will say against PDP, the APC government is a PDP government. It is our own.

PT: As a Nigerian, what is your concern about what is currently happening under Buhari administration? Will you say it is sad and unfortunate, or are you happy, as failure of a government will be an added advantage to an opposition candidate?

LAMIDO: You see, as a Nigerian and a citizen, I don’t celebrate a government mistake because we are going to pay the consequences of that mistake. So, I am not in any way celebrating APC failure as a government, because the government is not APC personal government, it is the Nigerian government. That government has a duty to perform. Unfortunately they went into the government unprepared.

Because they are unprepared, that is why they must continue churning out lies to mask their failure. During the campaign they kept saying PDP is Boko Haram, we are evil, and we were demonised. Now they are in government, they failed to move away from a political party seeking position to a party as an institution and a government.

But because they have no simple sense of what is known as government and governance, they kept on with the same propaganda. And if you speak about the government which you have the right to speak, the operators and propagandists of the party called APC will mock you. It is very dangerous for a government to be mocking its citizen.

Today in Nigeria, a citizen is mocked for saying his own right about his government. When you speak, they will call you a wailing wailer. Now, if people are wailing because of what they see is wrong, the government should ask, why are they wailing? But instead, they make you a laughing stock. It doesn’t make sense. It means they don’t know what leadership is.

When your children are crying because they are hungry, what will you do? Are you going to provide food for them or you just simply call them wailing wailers?

They are utterly irrational and don’t know what is called leadership. They are simply sitting there on privilege, but they are thinking the government is their own right. Somebody who contributed nothing to the evolution of political Nigeria is today calling the shot in Nigerian government. And the culture of lies became their art of governance.

When President was sick, he was taken abroad. Lai and Adesina were saying he was taking some antibiotics, he is just resting, and he is healthy, bla, bla. But when Buhari came back, he said he was sick. When Yar’Adua was sick, the same Lai and others were demanding for their right to know their president’s health condition, even the way he eats. But now they are in the government, we are now overwhelmed with tonnes of lies.

Look at the issue that billions of dollars of NNPC contract. At the same time ASUU were on strike. Now, if you take just one billion dollars to our universities, it will make sense there. Our roads are now terrible. If you put some reasonable amount there, it will also make sense. Look at Kaduna-Kano road for goodness sake.

The medical doctors are also screaming. If you take something out of that money meant for NNPC contract, it will be OK to stop all these strikes. After budgeting over N3 billion to Aso Rock clinic, they now said there is no even a syringe there.

But they kept on saying we are wailing. Thank God Aisha Buhari is among the wailers, she now wails like me. Even APC is now equally wailing. Nigeria is now a wailing nation.

PT: PDP is preparing for its National Convention. With the crisis of litigation and confusion over chairmanship of the party, will you say that the party has learnt any lesson?

LAMIDO: We are going into an election year, the chairman you elect now more or less merely symbolic. He is a symbol of authority and makes things work. Whoever is elected as the chairman cannot go to, say Niger State, and tell the party delegates to vote Mr. So and So, on account of his instructions as the chairman of the party. He cannot go to Sokoto, Jigawa or any state and assert his authority. It is something to be done collectively.

By now, we have gone a long way; it is going to be less personal in our party affairs. Whoever emerges as the party chairman must rely on the party supporters to guide him and assist him to success.

PT: One of the biggest challenges the next president will face is how to put Nigeria’s economy on the right track. A dollar is about N365, while a litre of petrol is N145. How are you…

LAMIDO: (Cuts in) Ashafa, you are going too academic. The human mind is trained to confront challenges. I have seen several countries that are now something, but they came out from nothing. It is all about ideas, not just mere theories. Many countries with no raw materials, no diamonds are now great nations. Why? Because ideas create wealth. Look at South Korea, they are among the builders of the biggest ships in the world, yet have no iron ore.

This government which calls you a wailer, which divides Nigeria, their chemistry and ideas are zero. In the last two year no significant portions of investment came to Nigeria, nothing. Go to Angola, in one year they got N16 billion investment. Egypt is now a strong economic nation. Look at Rwanda. So no matter how many theories you have, how do you put the Nigerian chemistry right?

So, it is not about how many economic theorists we have. This is a country where Professor Itse Sagay says APC is a party of thieves, the party of people who are very corrupt, and he is serving in this government. Tell me, who will come from Europe and invest?

PT: What is very attractive about village life to a personality like you? Because whenever you are not in Kano, you are always resting in in your village, Bamaina, Jigawa State.

LAMIDO: My father and mother gave birth to me there. No matter what I become in life, even if I become the world president, my root is from that village. My life started from a village; that is why I love my village with passion.

We won’t recall Jibrin until he apologises – Reps

Commence a Master’s degree at University of Dundee this January