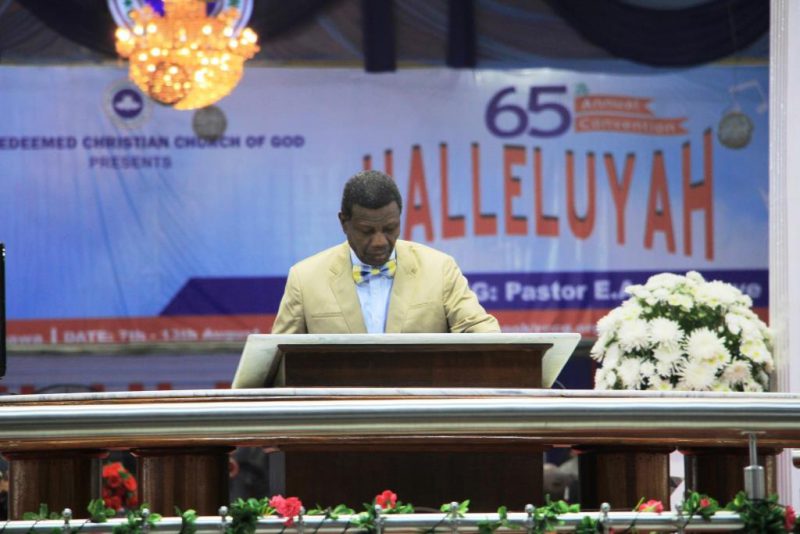 How Redeemed Church successfully hosted millions of worshippers for a week

Devoting a whole week to praising God by millions of people around the world turned out to be a wonderful experience for many people at the 65th annual convention of the Redeemed Christian Church of God. And not unexpectedly it offered several story pegs to writers – ranging from things usually taken for granted to the most spiritual experience.

To have millions of people flock into the Redemption Camp, with thousands of volunteers and guests accommodated and fed freely during the period without any incident and for programmes to run seamlessly, may be taken for granted but it is a miracle in itself.

The Friday scenes at the twin camps of the church – the original Redemption Camp at Kilometre 46, Lagos-Ibadan Expressway and at The Arena, the three-kilometre-by-three-kilometre auditorium – witnessed a deluge of unforgettable experiences by worshippers. A typical example was one of a fair-complexioned lady of about 45 years old who dangled her car key‎ unconsciously as she walked several metres uphill. “I have never seen a thing like this all my life,” she said.

Like the reporter, as early as 4.30 p.m. for an event that would start at 8pm, she had to park her car near the entrance of the Arena and walk several metres to the auditorium, which was purposefully built for an envisaged crowd of that size. But it would seem that on a day like that the auditorium would still come under pressure.

With the completed sections of The Arena full to capacity, over 3 million people must have been there.

Amazingly, the old auditorium at the Redemption Camp was almost full, even without the physical presence of Pastor Adeboye there. The auditorium seats 3 million people.

People also participated at viewing centres of the numerous RCCG parishes around the country, and in 194 other countries around the world.

Acting President Yemi Osinbajo, who must have had a VIP entry, as did some state governors who were in attendance on Friday, couldn’t help but note the miracle during a book launch at the Redemption Camp last Tuesday. He said: “The RCCG is the church that has been able to pull the largest gathering at a single convention in the world. Apart from Coca-Cola, the Church is next in mileage across the world.”

He added, “It all has to do with the sincerity, dedication and humility of Daddy G‎O (as Pastor E.A. Adeboye is fondly called).

The General Overseer, however, characteristically attributed all the achievements to God. That must have been the reason why, as revealed by him, even though he slept for only one hour a day during the convention and participated in nearly all daily programmes, he looked fresher and more energetic by the day. During ‎the thanksgiving service on Sunday, he looked like a man in his 50s, far younger than a 75-year-old man.

He said at the launch of a book, “Pastor E.A. Adeboye: His Life and Calling,” written by 40 authors, which was hidden from him by his wife, Folu Adeboye, the lead author, until an hour to the ceremony: “My wife knows that if I had any idea about what is happening today, it would never happen. I would have stopped it long ago because who am I without Jesus Christ? If there is anyone to be celebrated, it should be Him.

“People say I am humble, but people need to know where I am coming from. I cannot say I have any ability or wisdom. Everything has been the Lord Himself. When I was about 40 and spotted grey hairs on my head, I wondered why and God said I was carrying a burden that was not mine.“ God said, ‘I am just using you as camouflage. People need to see someone. So, I am putting you forward so that I can do the work from behind.

So, everything that is happening in RCCG, nothing is of Adeboye at all; it is all about God. So, for you to say you are writing a book about somebody that is nothing; someone who has almost zero beginning, from a poor family and who passed through secondary school by God’s grace.”

That was the reason why when this writer was urged to launch a book he wrote about Pastor Adeboye in March titled, “Stories of Pastor E.A. Adeboye: The Power of Testimony,” he said the General Overseer would not be comfortable with it.

The convention was evidently a successful one, and at the thanksgiving ceremony on Sunday, retired Assistant General Overseer, G.A. Ilori, rightly gave profuse glory to God for the success of the convention.”We have had opportunity to praise God and He has done wonderful things in our lives,” he noted.

It was similarly important for the mothers of the 106 babies who were delivered at the medical facility of the church, as it was for thousands of other mothers who had been prayed for by the church and so took their babies to the altars at the twin camps and viewing centres across the world for dedication and blessing.

On Friday at the Arena, from where this reporter sat, he counted over 2,000 people as they poured out from one side of the Arena and gave up when the surge made it impossible to continue. People were also pouring in from all angles. In the end, an estimated pool of thousands of mothers had gathered at the altar, some of them shedding tears of joy.

The scene at the old auditorium, which was beamed on the screen, showed a similar pool.

“I rejoice with you all because my father visited your wombs and gave you joy,” Pastor Adeboye said as he prayed for them.

Of major importance to Pastor Adeboye, who always emphasizes salvation and what it takes to make heaven‎, were the people, in large numbers, who rushed to the altar anytime the call was made every day.

Amazing testimonies were also given, and for the many whom needed miracles there were opportunities to be hopeful or even assured of one.

On Thursday, Pastor Adeboye led the millions of people participating in the convention around the world to replicate the miraculous fall of the Wall of Jericho, which happened some 10, 000 years ago. Well aware that the exercise would sound childish to some church members and others, he took some time to explain it. He started by saying, “I know you trust me, but I have to assure you about what God has asked us to do.

Initially, I wanted us to sing praises to the Lord and dance to end tonight’s service, but He told me we should do something special.”

Assured that the congregation ‎was convinced, he asked that people do a circular walk in the limited spaces they had as he counted from one to seven. After the seventh, the church’s music instrumentalists were to blow trumpets for the congregation to shout Halleluyah as the Israelites did.

For most people, that was not going to be a problem so long as Pastor Adeboye, noted for signs, wonders and miracles, led them.

Promptly, the exercise began, but at the 6th round, some people shouted Halleluyah. He let it pass for the exercise to be completed, after which he explained the premature shout of Halleluyah was from the devil inside the few people who shouted that came out. He then asked for a repeat of the seventh round after which the trumpets blared for a thunderous shout of Halleluyah and continuous praise of the Lord by a joyous congregation, which at the Redemption Camp alone, numbered thousands. ‎The auditorium was full to capacity.

The Friday he had called “a special day” ‎was also described by many people as a wonderful experience. He blessed them with the staff he had been given by the founder of the church, the late Rev. Josiah Akindayomi.

Like the night before, he took time to prepare the congregation for what some people might deem childish. He extolled the achievements of the founder of the church, recalling that although he was illiterate, God had done many great things for the church through revelations He had given him. Among them were the name of the church revealed to an illiterate in English; that he would travel the world over, which he did before he died; and that he would be instrumental to the spread of the church, which is now in 195 countries and counting.

That said, he paused and let out what was a secret to many people: “God had instructed Rev. Akindayomi to make a short wooden staff to be blessed; and to be handed over to his successor.” The congregation went quiet for more information about that; and when he lifted up the staff, people went wild with excitement.

Again, he called for attention and explained that the staff had been given to him years ago but God ordered that it should be used sparingly: he was going to use it at the Convention for three special prayers, including a prayer for God to make a way where there is no way. He would raise it ‎up, mention a prayer point and the congregation would pray. The prayers done, he raised it up again to bless handkerchiefs. As he did and prayed, the congregation waved the handkerchiefs with shouts of “Halleluyah, halleluyah.”

Throughout the Convention, the theme, Halleluyah or Praise was emphasized by Pas‎tor Adeboye and guests, including Bishop David Oyedepo and Rev Joe Olaiya, who ministered day and night. They explained the benefits of praising God as including the special attention of God, invitation of God’s presence and glory, which provides His favour, healing, access to revelation and breakthrough.

To close the convention, during which Pastor Mrs. Adeboye led prayers for all nations and their leaders, including President Buhari, Pastor Adeboye said: “It has been a glorious convention; God has surprised us, as He always does. Thank you all for your prayers, support and for standing by us.”

He recalled how during the church’s Holy Ghost Congress in‎ Abuja, God had asked him to praise Him for three days before asking for anything; and how that made the event a huge success. He then assured that for praising God all week, prayers would be answered.

He went on to bless the congregation and participants around the world. “For the rest of your life, you will be singing, dancing and shouting halleluyah,” he prophesied, among others.

“If the Lord tarries (in His second coming) we shall all be here again next year (for the convention)” he signed off prophetically.

Most likely, there would also be many more new faces and a renewed challenge of hosting millions of expectant people.