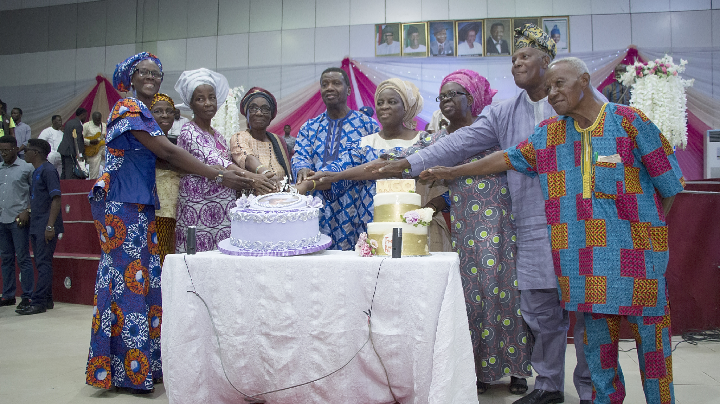 FEATURE: Pastor Adeboye, his wife, and their romantic messages, By Bisi Daniel

In one corner of a town in Osun State, he stands, hands in pocket, looking confidently at a lady with both inward and outward beauty that swings his heart like a pendulum. He knows her well and is sure about his choice because he had visited her home often to see a friend as a decoy.

As a handsome undergraduate‎, a photographer and a sportsman in an athletic frame and full hair, he has no problems getting women, but there is always the special woman, who could be taken home to meet a man’s mother.

Unfortunately, unlike hers, his family home is the poorest in the neighbourhood, where he dared not take her‎. His elder brother admitted recently they were the poorest among the poor in their part of town.

But the secret cannot be kept for too long if he has to live his dreams with her. He knows from Intel (intelligence gathering) that three men, one, a lawyer who had a car, ‎desperately wanted to marry her. He is the fourth and the poorest.

To his greatest shock, she talks about seeing someone like him near a storey building during a drive-by and wanted to know if that was home.
Shocker! But time to let cat out of the bag.

He looks her in the eyes, and says: “Ahh, who dash monkey banana?” (How could I possibly live in a storey building?). Please listen; I have nothing, no money, no house, no influence, nothing!  If I have anything at all, it is the little brain God gave to me.”

She is surprised, but not disappointed, because she is trained to be understanding and humble. She starts to think, but he won’t allow her.

He continues: “I have nothing to offer you except myself. If you will marry me, you will have me to yourself completely.”

Hmmmmm!  How does she marry the poorest of her suitors? But again, she had been trained at home and at college to know that some human values are worth more than gold. Additionally, she has the benefit of spiritual discernment. She had known him for a while, but could she trust the promise?

Another voice in her suggests a careful consideration of his honesty. A rash of thoughts! Finally she decides, “Because you are so honest, I will marry you.”

(True story, but the scene of the encounter created by the writer for story flow).

In some other homes, that would be described as a crazy decision and she would be warned to keep away from the poor suitor. But she is comfortable with the decision.

She was born on July 13, 1948 to the family of Jacob Adelusi Adeyokunu, a Methodist minister and teacher and Felicia Morounfola Adeyokunu in Ilesha. Her parents were God-fearing and they ensured their children were bought up in the ways of the Lord.

They married in 1967, the year he graduated from the University of Ife, now Obafemi Awolowo University, with a degree in Mathematics.

He is Pastor Enoch Adejare Adeboye, now leader of the Redeemed Christian Church of God (RCCG); and she is Pastor, Mrs, Foluke Adenika Adeboye, who turned 69 on July 13.
‎
A good decision

Her decision to marry for honesty turned out to be a blessed one. The young man, who knew education was the only way to break the vicious circle of poverty in his larger family, was also hardworking. He rose fast and soon became a lecturer of mathematics in the ‎university. Kids started coming and they were a happily family. Although, habits like drinking were not allowed in the white Bible she had given her as a birthday gift before they were married, she was a praying mother of husband and kids. He himself had countless experiences suggestive of God’s special interest in him, but they were largely ignored.

God has a way of “arresting” people He sets aside to use, in a way that evokes complete devotion and commitment.

One of their sons would fall ill and after exploring several alternatives, he could only find a cure in a church he had earlier ridiculed.

That was to be the game changer!
They walked into God’s purpose for them and not even fasting and prayers would stop his ordination as a pastor, and soon after, the divine promotion to be General Overseer of RCCG, now a mega church with world-wide presence.

A drop into poverty

But the promotion initially dropped the family into poverty again. From their palatial residence at University of Ilorin, where Pastor Adeboye taught, he moved to Lagos into a one-room apartment in Mushin, a Lagos suburb with a high crime rate. Much later, the family moved into a jungle of “robbers and snakes,” which is now the popular Redemption Camp.

Initially, they were so poor that they lacked even basic necessities of life, as this testimony of Pastor Adeboye shows:  “In those early days of the Redemption Camp, sometimes my wife used to prepare dinner for the children without meat and I was touched. I remembered those days, when our mothers used to make okro meat. They would take okro and cut off its head and bottom, and throw it into the okro soup. That was okro meat, very sweet.

“One day, I reminded my wife how I used to tell her to cut cow skin meat, popularly called pomo in local parlance, into small bits, especially the very thick ones, so that it could go round.”

But again, the prayerful and hardworking Mrs. Adeboye’s rare qualities shone through, supporting and stabilising her family. Many would have chickened out even at that stage. Many women still do during hard times.

Great woman! She packs so many fine qualities, sometimes when I see her at the Camp, tears of God’s goodness well my eyes. I still can’t explain it.

A family friend of theirs, Femi Adelegan, an author, writer, publisher and leader at the Sword of the Spirit Ministries, gives an instance of how supportive she still is: “Pastor (Mrs.) Adeboye commences her day with communion with God at about 3.00am. She remains in the place of prayer till 6am, when she switches over to participate in the family devotion.

“She is so much committed to praying that whenever her husband goes to minister and she has to stay at home, she would go into her prayer closet, urging God to help Daddy G.O. in his ministration. On more than one occasion, she would welcome her husband back and tell him some of God’s moves at the ministration she never attended. Her husband would be surprised.”

But, of course Pastor Adeboye knows and appreciates those qualities better. When he decided to commence the construction ‎of a world-class Prayer Mountain in Ifewara, he told her to handle it. A gifted organiser and manager of people, she took up the challenge.

A few years later at the opening of Mount Carmel Prayer Mountain, he said of her: “… To ensure that the dream would not die, and efforts that had been made would not be fruitless, I called my wife and gave her the responsibility to build this prayer mountain. My prayer for all of you here today is that God will give you a good wife; a wife who will be like a mother.”

The romantic messages
On her birthday is 2015, he was reported to have posted this message of Facebook: “Happy birthday to my sweet baby, my friend, my sister, my lover, my confidant, my pali, my only wife, my mummy and my partner in Christ. Love you today and always.”

Last Thursday, reports say, he called her “Baby” in a birthday message on Instagram.

Mrs. Adeboye has held top leadership positions in the church including President of the Redeemed Women Fellowship (God Women Fellowship), Director of Education. She is blessed with rare gifts of administration, planning, hospitality, counseling, mentoring, ministering comfort, care, and encouragement to many, bringing hope, love and succor to the hopeless.

A missionary and minister of the gospel of Jesus Christ, she is a powerful intercessor, Bible Teacher & role model for lots of women and a pioneer of multiple projects, ministries and missions to the glory of God.

Fondly called Mummy G.O and Mother-in-Israel, she is so passionate about Nigeria, the segment of prayers for countries at major RCCG events is reserved for her.

That is the great woman many people around the world celebrated last week! At the Thursday’s Thanksgiving and Celebration at the Redemption Camp, she gave profuse thanks to God, her husband, RCCG elders and pastors, the rest of the church and all who attended the event.

Of her husband she said, “Thanks to Daddy GO; he is my pastor, my friend, husband, mentor, prayer partner, and anything good you can find in a man, he is to me.”

Then she handed the microphone to him.

And as he prayed, she got on her knees.

• Bisi is author of Stories of Pastor E.A Adeboye