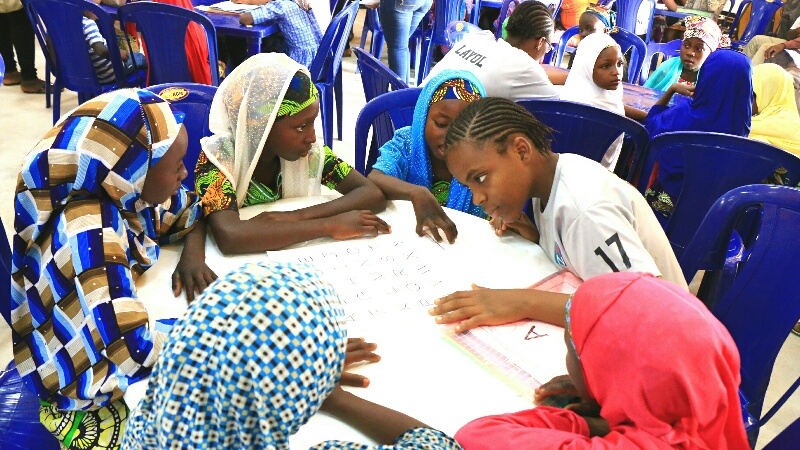 The debate in the West about terrorism is usually presented in stark and defensive terms: increase security, curtail civil liberties and reduce the number of refugees allowed to emigrate. Is there not another solution that would prevent angry and hopeless youth from joining terrorist groups?

As the world searches for models to keep young people from joining radical groups, and new ways to prevent violence and foster development, we may have one. Perhaps our experience in Yola, Nigeria might add something to the global debate.

Yola, desperately poor, sits on the edge of the Sahara Desert, and for the past three years on the porous border between safety and security, at the edge of the territory seized by Boko Haram terrorists. The American University of Nigeria (AUN) was established in this unlikely spot, founded by the former Nigerian Vice-President Atiku Abubakar, who was orphaned in this area as a young boy. “Be a development university,” he said when the university was established a little over a decade ago. We want students to know about the problems in their country and be prepared to solve them when they graduate. Little did we know that all of us would have to launch a massive response to a humanitarian crisis.

Four years ago, with a growing number of unemployed youth just outside the gates of the University, and the hungry and hopeless in flight from Boko Haram flooding into our small city, AUN began to implement our vision of a “development university.” We reached out to local religious and community leaders to see how we might partner in peace, food security, and education programs.

The AUN-Adamawa Peace Initiative (AUN-API) was born. All major local Muslim and Christian leaders, traditional rulers, and local community leaders actively participate. Our goals are simple: educate and feed as many people as we can. In the process, we were guided by a number of principles: make sure women and girls are included in all projects; involve religious leaders in all efforts; involve AUN students, faculty, and staff in all of these projects, and make sure our local vulnerable youth know that they have a network of people who care about them and their future.

The tsunami of hungry frightened people began arriving in Yola in 2014. The first 5,000 had few relatives in the area, no food and no access to school.

One of our peace members, Chief Abdulmumini, said in our weekly peace meeting, that if the university would provide seeds and school feeds, he would settle them on his land. We raised funds for seeds, food and clothing, and foolishly thought the problem of displaced people was solved.

The next wave of 20,000 arrived by foot and by bus. Their hungry faces were seen everywhere in town. The Catholic Cathedral and Muslim Centre became the major feeding areas. Our AUN-API members developed comprehensive lists of where people came from, their names, ages, and gender so we could provide the most accurate food and supplies. For example, women needed sanitary supplies; some young children needed life saving oral rehydration. At AUN, we held classes all day and raised funds and fed hungry people the rest of the time.

While many had local relatives, the most desperate, who had no family connections, moved to the government-run IDP camps. Food and relief supplies to the camps were politicized from the first day. I was asked to be on the Governor’s committee for IDPs. For the first three weeks of our committee meetings, the argument were intense about the budget for food and supplies: the discussions were not focused on using the money for the refugees, but on how committee members could divide up the budget among themselves. Before too long I was not informed of the timing for the meetings.

As the crisis continued, and elections loomed, the politicization worsened. Bags of food from the government were covered with then President Goodluck Jonathan’s pictures and in one government feeding, which I attended, there was food only for about 200 when at least 5,000 were in need.

By early 2016, AUN-API had fed close to 300,000 people. One young woman and baby, who had been held in the Sambisa forest by Boko Haram and were severely malnourished, died in our local hospital. We all mourned. Last week we learned that 1,200 people had died in a government camp. The contrast between the care given to people living in a community and those in government camps is stark. This is a lesson Europe and others should learn.

What other lessons have we learned here that can be generalized to other cities and countries?

First is the centrality of local leaders in any development effort. These conscientious and concerned religious and community leaders know which youth are particularly at risk to be radicalized. Second, find out what these young people really want. Our peace network identifies the youth who need literacy education, tools to start a business, training to learn about information technology (which our youth want as much as any around the world). Then AUN designs programs and projects to meet these needs.

The young people told us they wanted to play sports. Thousands have joined our Peace Through Sports program, which not only gives young people a chance to compete with each other in soccer, basketball and volleyball, and something to do during the day, but also teaches them to think about peace and cooperation. We begin each program with a discussion of peace, led by members of AUN-API. We listen to them talk about their challenges. Most of the games occur on our campus, where students and staff welcome them and make them feel they are part of our community. Every team is made up of members of different religious and tribal communities. They forge teams with people they would otherwise never encounter, much less befriend.

While it’s impossible to pinpoint which of our programs have kept youth from joining the terrorist group in our back yard, more than one young man has said to me, “It is either you or Boko Haram—there is nothing else.” AUN-API leaders can document that none of the youth they identified and brought into our various programs joined the terrorist group.

As the threat from Boko Haram fades, the problems local people face have not diminished. Thousands of very young children have been orphaned, left in our city to live with non-family members. Hunger has increased, as thousands of farmers were not able to plant their crops. AUN-API is trying to deal with this next phase of the humanitarian crisis. The U.S. Agency for International Development (USAID) and Atiku Abubakar provided seeds, which we distributed to about 6500 families (representing about 65,000 people).

With assistance from United States Agency for International Development, we established Technology Enhanced Literacy for All (TELA), which employs tablet computers and radio broadcasts to extend learning to 22,000 out-of -school children. Many of the students walk up to three miles each way to participate. If for some reason a session is cancelled, children are visibly upset. When a radio failed to materialize recently, children went house-to-house in a village until they found someone willing to loan them one.

AUN feeds and provides literacy and numeracy education to hundreds of children who are homeless, orphans, and Almajiri (Muslim religious school) boys. This program, Feed and Read, has just expanded to include Feed and Read for Girls. These children are out of school and are among the millions of Nigerian children who comprise the largest out-of-school population in the world. Currently, about 500 children receive instruction and a meal through these two programs. The plan is to expand the program to 2000 children by 2017.
The demand for places in our programs far exceeds the number of places and available funding. At every session, hundreds of children crowd around the learning centres in hopes of participating. The children in the Feed and Read programs share their meals with children who aren’t. It’s heartbreaking to know that there are so many local children who are hungry for learning, and just plain hungry, who we cannot yet help.

It is essential that these modest efforts be replicated and expanded immediately. Otherwise, the most vicious cycle will begin again, devouring youth who are uneducated, destitute, with no family, no support, and “nothing else” in their lives. We all know where that leads.

Nigeria to train 500 ex-militants in farming