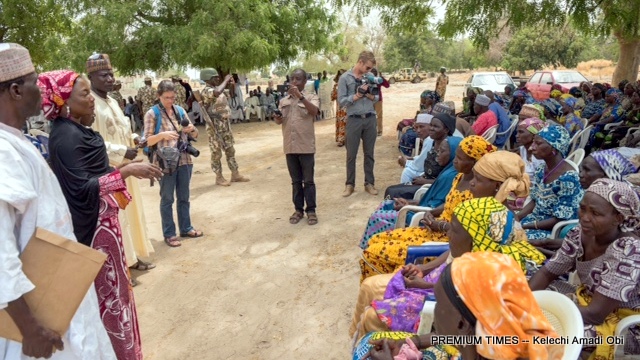 As the daughter of an assassinated Nigerian leader, Aisha Muhammed-Oyebode was used to conspiracy and denial theories but she is determined the abduction of nearly 300 schoolgirls in Nigeria two years ago will not be turned from fact to fantasy.

It was a Friday morning in February 1976 when Ms. Muhammed-Oyebode was picked up from her boarding school in Lagos by her uncle under the guise of attending a family function.

But it was not until two days later that the 12-year-old was told the news that threw the entire country into mourning – her father, General Murtala Muhammed, Nigeria’s young, reformist head of state, had been shot dead in an abortive coup attempt.

“Each time I tried to talk about my grief in public, people hushed me as if I was making them uncomfortable,” Ms. Muhammed-Oyebode said in an interview with the Thomson Reuters Foundation as she discussed a book she is working on about the girls missing from Chibok in northeast Nigeria.

Ms. Muhammed-Oyebode said she feared the same public unease about the abduction of 276 schoolgirls by the Islamist group Boko Haram in Chibok, northeast Nigeria, on April 14, 2014, was leading to a growing trend to question and even deny the event.

The kidnapping of the girls, of whom 57 escaped but 219 remain missing, became politicised with Nigeria’s government and military facing heavy criticism for their handling of the incident, sparking protests in towns and cities nationwide.

President Goodluck Jonathan, who declined to comment on the kidnappings for almost three weeks, was criticised for his slow reaction, and became the first sitting Nigerian president to lose an election, in May 2015, defeated by Muhammadu Buhari.

Ms. Muhammed-Oyebode, 52, chief executive of the Murtala Muhammed Foundation that aims to improve the quality of life of Africans, said she now regularly meets Nigerians who doubt that the Chibok abductions actually happened and believe it was merely a political stunt to embarrass the previous government.

Last month a Nigerian state governor, Ayodele Fayose, publicly described the kidnapping as a sham and a hoax, driven by politics.

“Some of the denial no doubt is out of debilitating fear,” said Ms. Muhammed-Oyebode, who is also leader of the Lagos chapter of the Bring Back Our Girls group set up after the abduction to campaign on their families’ behalf.

“Our minds are refusing to acknowledge that this happened in our Nigeria because doing so means accepting that it could happen to any of us.”

She organised a peaceful demonstration in Lagos about two weeks after the kidnapping at Chibok that sparked an international outcry and drive on social media hashtagged #bringbackourgirls joined by celebrities and politicians.

Her own personal experiences following the death of her 37-year-old father and then the death 18 years later, in 1994, of her eldest brother Zakari, who was shot dead by a friend in a homicide that remains unresolved fuelled her drive to campaign for the girls.

She said the pressure she was put under not to talk about these deaths and to move on inspired her to document the stories of the 219 missing schoolgirls to make sure their lives are not forgotten.

Boko Haram is estimated to have abducted over 2,000 girls and boys in recent years, using their victims as cooks, sex slaves, fighters and even suicide bombers but Chibok remains the most high profile kidnapping by the group.

Ms. Muhammed-Oyebode said it was tragic these girls remained largely faceless so has been leading a project since mid-2015 which has involved talking to the parents of the missing girls and taking photos for book to be published later this year.

This has involved sending a team of interviewers, a photographer and videographer to Chibok where they have interviewed parents of about 201 of the girls and taken photos of their lives, such as family portraits and personal items.

Ms. Muhammed-Oyebode said the aim was to humanise the missing girls, to capture their lives before the abduction and to highlight how their families have struggled to cope afterwards.

She was determined the “culture of denial” that she faced after her father and her brother’s deaths did not extend to the abduction of the Chibok girls.

Ms. Muhammed-Oyebode said the parents needed support to deal with the disappearance of their daughters – and to ensure that their abduction did not disappear from the headlines.

“I sense that they feel that they have no right to grieve openly, and I sense they probably also feel they do not have a right to demand that we find their children,” said Ms. Muhammed-Oyebode, a lawyer and mother of three.

“We must document their stories and by doing so acknowledge their pain and their right to feel pain. By documenting their stories, I hope we can give the parents and their children a voice.”

This story was originally published by the Thomson Reuters Foundation.