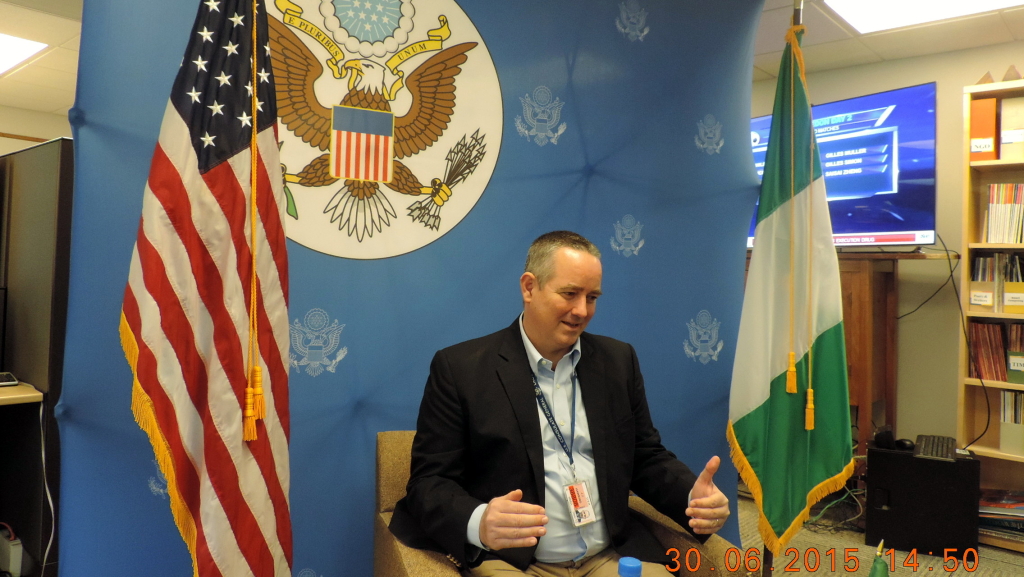 In this interview with PREMIUM TIMES, Jeffrey Hawkins, the outgoing U.S. Consular-General, spoke about Nigeria’s political class, his country’s support for the war against insurgency, and United States’ concerns about Nigeria’s Same-Sex Marriage prohibition law.

PT: You’ve spent about three years in Nigeria as the Consular-General, what’s your opinion of Nigerian politicians and politics?

‎Hawkins: Well, let me say first of all that I think for Nigeria, like the United States, democracy is an ongoing process. You don’t just arrive at democracy one day and you are there and you are done, that’s it, and you stop. We haven’t stopped growing, changing, adapting to circumstances, responding to crisis and Nigeria has to do the same thing. Like the United States, Nigeria has a functional democracy. Whether it’s a free and vibrant press, which is a huge thing for democracy, or electoral structures, – INEC, which functions and provides Nigeria’s elections. There’s the court system. There are all those other elements that work better than others.

I think that one of the things that can be focused on is, the political party system (in Nigeria) can probably still use a little work. Political parties are vital elements in a functioning democratic system. The reason is because it’s the parties that develop the choices that voters are supposed to be making. And currently in Nigerian politics, often the choices that voters are asked to make are about one person or another. And that’s true in the United States, you’re voting for president you’re looking at the person, his records, his integrity, but you’re also voting based on policies and ideologies. And so if you are a really strong Republican in the United States, even if you really, individually, like a Democratic candidate you can’t vote for that person because he doesn’t reflect the policies, and probably not going to implement the policies you’d like to see implemented. In Nigeria, I don’t think there’s a lot of thinking that way; it’s ‘so and so is good,’ ‘so and so is not good,’ ‘so and so is from my part of the country,’ ‘so and so is not from my part of the country,’ whatever it is. And that’s kind of the only basis that those decisions get made on and I think that’s a very big problem.

Whether it is the PDP or APC or APGA, whatever, they all need to work a lot harder at develop‎ing an ideological and policy identity as opposed to a person identity, as opposed to being vehicles for individuals. Because that way people are really making real choices about policy.

And similarly, I think even (for) the best politicians in Nigeria sometimes it’s much more about what did I do? Did I build these schools? Did I build the flyover here? Something like that. As opposed to do I have a wider construct for this country and the vision for the way forward? You don’t see a lot of that and I think that’s really important.

PT: On Monday, when President Buhari was inaugurating the National Economic Summit, he spoke about the G7 agreeing to support Nigeria with military equipment to fight Boko Haram. And the U.S is a member of the G7. Do you have any information as to the nature of this support?

Hawkins: I can certainly speak to our assistance, and it’s been kind of broad‎ throughout the entire time that I’ve been here. I mean it runs the whole gamut from equipment… For me, living in Lagos in Southern Nigeria, the big symbol of that is the NNS Okpabana, which is the new flagship of the Nigerian Navy. (It) was provided by the United States government. It’s a big, great symbol in Lagos harbour reflecting our commitment to Nigeria’s security. A great deal of training. And on an individual level, people going to schools in the United States. You often find Nigerian officers with American jump wings on their uniforms, that sort of thing, because they’ve trained in the U.S. Training on a unit level as well – again, here in Southern Nigeria where I work, the special boat service, which is Nigeria’s really premier special operations unit, gets a lot of support from the United States, did a lot of training with the U.S military.

There’s certainly an intelligence and information sharing component to it‎ and we are very actively working with the Nigerian military, Office of the National Security Adviser and others on that aspect. It’s a very deep relationship.

PT: Talking about relationship, the immediate past administration at a point was talking about the U.S fru‎strating its efforts to acquire equipment to fight Boko Haram. To what extent did that affect U.S-Nigeria relations?

That whole thing was incredibly overblown. It was really a discussion of one weapon system that sort of took a life of its own particularly ‎in the Nigerian media. And I don’t think that impression was reflective of the deepness, again of this relationship, and of our commitment to supporting Nigeria in its fight against Boko Haram.

‎PT: Let me ask you about Buruji Kashamu, the Nigerian Senator wanted in your country. He has filed a lawsuit in the U.S. accusing your law enforcement agents of conniving with Nigerian officials to forcefully abduct him to the U.S. Does the U.S. want Kashamu to come and face the charges against him?

Last year, Ambassador Entwistle spoke about Nigeria’s anti-gay law being capable of jeopardising her chances of receiving aids from the U‎nited States. Has that position changed?

‎Obviously we have an extremely robust assistance relationship with Nigeria, and we do something in the order of $650 million a year, so over half a billion dollars a year as assistance to Nigeria. We do feel very strongly that the rights of all Nigerians including Nigerians from the LGBT community should be respected. We are strongly committed to human rights and we like our partners to be likewise. There was a great deal of debate and discussion with Nigeria when the Same-Sex Marraige Act was passed, particularly not because the issue of same-sex marriage itself, because it was already not permitted in Nigeria. We didn’t have a view on that one other than it’s an internal thing. But because that law made it illegal to belong to an organisation that espouse same sex marriage. That law made it illegal to speak openly about that issue. So for us those were issues probably unconstitutional under Nigeria’s Constitution. Those were issues that were affecting freedom of speech and freedom of assembly and that’s why we had significant problem with that law.

PT: Are you saying that the ‎kind of law Nigeria passes could affect the level of aid Nigeria gets from the U.S.?

Hawkins: Nigeria did pass the Same-Sex Marriage Act and that had no impact on our assistance to Nigeria.

PT: Nigeria’s success in fighting corruption in the past is attributed partly to the collaboration of her anti-corruption agencies with their foreign counterparts, including those from the U.S. But in recent years, that‎ fight seems to have waned. Does the U.S. still collaborate with the EFCC and ICPC?

We have been co-operating with EFCC, we’ve given some support to EFCC in terms of its capabilities in fighting corruption. So there is technical part of that, and that’s something we will continue to work on‎. And then there’s the political will part of that too. The political will doesn’t come from the international community, it comes from the Nigerian leadership. It’s certainly an issue that we think of as important. There’s a bureau within the State Department on international law enforcement that has a presence in Abuja and here in the Consulate. One of the things they do is support Nigeria’s law enforcement efforts in fighting corruption. They are also responsible for our engagement with the EFCC and other organisations in Nigerian law enforcement circle.

‎PT: Describe your stay in Nigeria, in one word.