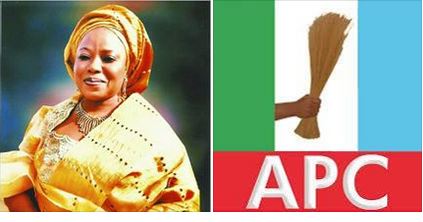 APC will not discriminate against women -​ Party’s women leader

National Women Leader of the All Progressive Congress, Ramat Aliyu, talks to PREMIUM TIMES about the need to create an enabling environment for women in the Muhammadu Buhari administration which is to take

Ms. Aliyu denied the allegations that APC is an “Islamic party.” She says the party has no  plans to Islamise Nigeria.

She also says that Chibok girls will be thoroughly

​rehabilitated and trained on their return from captivity.

PT: How do you actively promote women?

ALIYU: Women, as you know, contribute immensely to the development of a nation, and also contribute in terms of stability. In my office here, I try to regulate and implement policies, initiate and support issues affecting women in  nation building​.
​
PT: What are the policies?

ALIYU: A total inclusion of women in the political space with the eradication of gender apathy completely.

PT: How do you intend to do so?

ALIYU: For instance, in my office, the inclusion and giving of free tickets to women; you know that finance is a problem for women (who want to participate in politics.) We provide an enabling environment and encourage  men to be more accomodative to us. We help women believe in themselves by including them in party registrations. We encourage women from the grassroots to be card carrying members of this great party.

PT: How many women are in the party ?

ALIYU: Membership is about 60 per cent, which is a big improvement on the last registration. We attend policy meetings and grassroots initiative meeting to rub minds. We are getting capable women; we have professionals as card carrying members. We are boosting the capability of women in the political circle.

PT: Are you not worried that the cultural barrier in some parts of the country may hinder some women getting into politics? Are there guidelines on this?

ALIYU: Talking about the Southwest women, they believe more and the women are more into it (politics). Then you have the conservatives like the Igbos who are actually more business oriented. They are more self-employed. Those are more difficult to convince but they do believe in the government. The North, which happens to be the region I am from – interestingly, gone are those days when they believe women should be seen not heard. She should be always in the background. We are looking forward to a situation where we will contest and not only contest but make a difference; where (a woman) would emerge president of the nation, you know, through credible elections. We have quite a number of women and we are looking forward to it.

PT: What is the policy of the party with regards to women?

ALIYU: Under the APC, an enabling environment (to contribute to politics) will be created. We will make the women  work like the men too, to occupy and be part of the system because they need to fill that quota. The 35 to 40 per cent slots are not realistic. They look real but it is  make-believe. We are targeting the grassroots. When you groom the down trodden and you get the environment super saturated it goes around the system.

PT: Your party has been accused of being an “Islamic party,” what is your opinion on this?

ALIYU: The campaign of hate; we must understand the differences between reality and what is made up just for campaigns or t​o​ dent a platform or destroy a certain personality. The president (Buhari) knows the perception of people is that he is coming to Islamise the country. This was a president who ruled the nation under the military dispensation and has 70 per cent of his staff as Christians, the drivers, the cooks, security and, for one day did he say, “You are a Muslim and you must join me to pray?” Not when he was even free under the military government and how is he going to do that now? Even now most of his aides are Christians. As the APC government continues, as we have been given the opportunity to serve, we must tell Nigerians, and we must be able to identify from now onwards the difference between a campaign of hate and that on issues.

PT: What plan does your office have for the Chibok girls when they return?

ALIYU: As you know there is still an incumbent government. We decided as a party to improve our strategies. There must be re-orientation. There will be a place where they’ll be kept. They’ll be rehabilitated and psychologically cleansed and brought up to the fact that they must be able to face the world. These young girls, get them fit. When they are stabilized, they’ll be admitted into school again to write their exams. They’ll be sponsored and encouraged. The burden of training will be lifted off the neck of their parents.

PT: What difference does the party want to make in the life of Nigerian women?

ALIYU: We won’t do pet projects because it is not permanent but we have plans to bring out policies that will secure a better life for these women, for us, for the children. Above all, we want to follow and get the party to effectively use the Child Rights Act. We want to see the child is taken care of by the government. I want to see an environment where we have more than 70 per cent living above the poverty line.