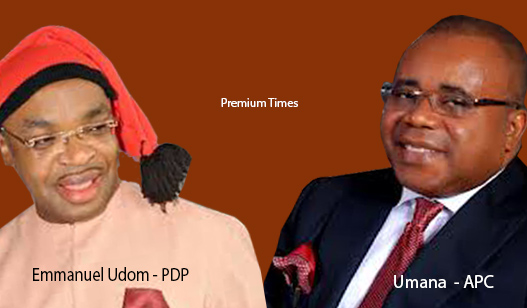 The emergence of Godswill Akpabio as the governor of Akwa Ibom State on the platform of the Peoples Democratic Party, PDP, cut a swathe through the formidable political machine that had produced the two previous democratically elected governors of the state, Akpan Isemin and Victor Attah. The machine was decapitated in 2007, when Mr. Attah attempted to foist his son in-law, Udoma Ekarika, on the party and on the state. Mr. Ekarika did not only fail the PDP primary but his father in-law, Mr. Attah, also lost the support of the political kingmakers, prominent indigenes and people of Akwa Ibom State.

With the support of political bigwigs, including a former Secretary to the Government of the Federation, Ufot Ekaette; former Minster of Petroleum, Don Etiebet; former Minister of State for the Federal Capital Territory, John Udoedehe; former Deputy Governor, Nsima Ekere; former Secretary to the State Government, Umana, and many others, Mr. Akpabio was able to win his way into the Hilltop Mansion, the Akwa Ibom State Government House.

However, one of the major platforms that saw to Mr. Akpabio’s victory at the 2007 and 2011 polls was the Akwa Ibom Peoples Forum, AKPF, a grassroots political group formed by Samuel Akpan, the then state deputy chairman of the PDP.

Shortly after he was re-elected in 2011, Mr. Akpabio emasculated the AKPF and other such groups that made serious political gains for him during polls. However, unlike in 2007 where the then incumbent, Mr. Attah, had lost grip of power as a result of serious miscalculation in the choice of his successor, Mr. Akpabio has against debilitating odds, maintained a solid grip on the PDP. But observers say it is also a factor that could work against his interest in the election.

Mr. Emmanuel was a consummate banker with a rewarding career in Diamond Bank Plc and Zenith Bank Plc, before he was appointed SSG in 2013. Barely one year on the saddle, he again resigned and contested for the governorship of the state. Despite his enviable credentials and experience, Mr. Emmanuel is facing stiff opposition not only from those who do not want Mr. Akpabio to produce a successor but also from 22 former PDP governorship aspirants. The group popularly referred to as G-22, is made up of former allies of Mr. Akpabio including former deputy governors, commissioners, and party stalwarts. The G-22 is also supported by the three serving senators from the state, six members of the House of Representatives and 14 members of the state assembly.

The leader of the group and former deputy governor of the state, Nsima Ekere, said Mr. Akpabio is making himself the unofficial campaign manager of the opposition political parties through his various undemocratic tendencies.

“There was no accreditation of candidates in line with the party guidelines for the primaries,” Mr. Ekere said.

“The lists of delegates used for the National and State Assembly elections were different from that of the governorship. A lot of statutory delegates were substituted with the names of those who were not accredited, but were ready to collect N1 million from the governor and vote his candidate.”

Mr. Ekere and the members of the group said they are afraid that the PDP would lose Akwa Ibom if a credible candidate that is acceptable by the people is not allowed to represent the party come February.

While Mr. Emmanuel has no known political enemies as a person, his connection with the state governor has attracted vendetta from people who have felt short-changed by Mr. Akpabio during his seven and a half years of “uncommon transformation;” a touted slogan for the sometimes over-priced projects embarked upon by the government.

A Professor of Mass Communication and foremost activist in the state, Des Wilson, believes Mr. Emmanuel may win the election. Coming from Eket Senatorial District with 12 local government areas, the largest in the state, Mr. Wilson argued that though many are unhappy with the way he emerged as PDP candidate, people from the area would vote for Mr. Emmanuel against the two other contenders.

“Certainly, he (Emmanuel) was not the choice of the people of Eket Senatorial District; but that he comes from that district, people who may be disgruntled will still vote for him because he is their son,” the university don said. “If elections are allowed to hold freely, it would be a strong fight between Emmanuel and Umana. Again, the government will deploy state resources to ensure that he wins.”

Mr. Umana, the APC candidate, has the longest record of service in government. A career civil servant, the former SSG joined the civil service in 1989 as a principal budget officer and in less than 11 years, rose through the ranks to become the permanent secretary in the budget office and later commissioner of finance in the Attah administration. In 2007, he was appointed SSG and at the time he was relieved of the post, he was the longest serving SSG in the state.

Mr. Umana, however, is under fire from forces within the APC. Some top members of the party in the state are uncomfortable with the way he secured the party’s ticket. Recently, Akpan Udoedehe, the man who singlehandedly funded and sustained the APC in the state, was said to have advised his supporters to boycott the party’s presidential campaign launch to protest alleged underhand deals that characterised the gubernatorial primary in the state. Mr. Umana had defected from the PDP to the APC barely a week before contesting and wining the party’s governorship ticket, a situation that has angered Mr. Udoedehe and his teeming supporters.

Mr. Wilson and a Uyo-based journalist, Paul Bassey, insist that Mr. Umana will have difficulties in winning the February poll because he is perceived to have been part of the evil things attributed to Mr. Akpabio’s administration.

“He is not totally accepted by the electorate and that again does not make his chances high,” said Mr. Wilson.

Samuel Akpan, the candidate of the Accord Party, holds many degrees, including a PhD in International Business from the United Nations University and has served the state in various capacities including leader of the erstwhile AKPF, PDP deputy chairman and Special Adviser, Bureau of Political and Legislative Matters to the governor, among others.

The Onna-born politician reportedly defected to the Accord Party a few weeks ago and is already clutching the party’s gubernatorial flag and waving for votes. But analysts say his chances of winning the election are very slim. Apart from the fact that his brainchild, the AKPF, which played significant role in the PDP’s victories at the 2007 and 2011 polls has been dismantled, the Accord Party on which platform he is contesting the election is scarcely known in the state.

Mr. Bassey, a public commentator from the state said it would be magical for Mr. Akpan to ride on the back of the Accord Party to the Hilltop Mansion. According to him, “The Accord Party is unknown and has no structure in Akwa Ibom State.”

Given the fact that the Accord Party has no roots in the state, most people believe that the race is between the PDP and the APC. But Professor Wilson is quick to add that though Mr. Umana would get votes from many parts of the state, the PDP machine will do everything to ensure that he does not obtain substantial votes in his hometown to discredit and show that he has no political roots.

Nonetheless, with massive support and resources from Mr. Akpabio, who could also influence security and ancillary agencies during the election, Mr. Emmanuel, his anointed candidate, might carry the day.