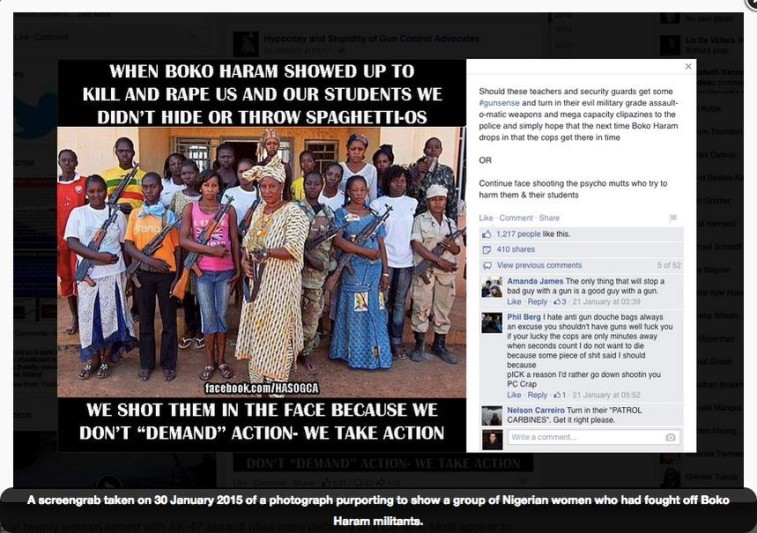 A group of twenty women armed with AK-47 assault rifles stare defiantly at a camera. Most appear to be civilians, although three of them are wearing military-style camouflage uniforms. One woman stands in front of the rest, her rifle aimed forward at waist level. The muzzle appears to have been taped over, possibly to keep dust out of the barrel.

On Twitter, Facebook and the Web, the women have been hailed as heroes in the fight against Boko Haram militants in northern Nigeria. “Nigerian women who repulsed a Boko Haram attack, kudos to these gutsy bravehearts,” read a typical tweet of the image this week.

The photograph has been circulating for some time. We found posts dating to 2013, but the image appears to have gone viral in April 2014, around the time that more than 200 schoolgirls were kidnapped by Boko Haram militants in Chibok. It has gained renewed currency since this month’s Baga massacre and the battle for the city of Maiduguri.

Many of the more recent tweets link to a fringe news website, Countercurrentnews.com, and a post dated 27 May 2014. The photo is prominently displayed. “Another Boko Haram attack repelled by armed women,” reads the headline.

“Several Nigerian media outlets have been reporting on local women in the villages of Attagara and Kawuri in Borno State who recently disarmed nearly a dozen Boko Haram terrorists,” the article continues.

“The notorious pseudo-Islamic terror groups tried to attack the Attagara and Kawuri communities over the weekend but the insurgents were instantly repelled by a group of armed women.”

A pro-gun Facebook page in the United States that calls itself “Hypocrisy and Stupidity of Gun Control Advocates” has also appropriated the photo, suggesting that it shows a group of Nigerian teachers.

It posted the image on 20 January 2015, along with this caption: “When Boko Haram showed up to kill and rape us and our students we didn’t hide or throw spaghetti-os…We shot them in the face because we don’t ‘demand’ action – we take action.” 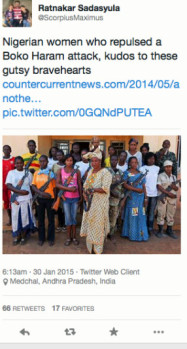 The picture was shared more than 400 times and by 30 January 2015, just over 1,200 Facebook users had “liked” it. “You get ’em ladies,” wrote one. “I find their lack of belt fed weapons and RPGs troubling,” said another. “Face shooting is definitely the way to go,” added a third.

We were intrigued. Where was the photograph taken? What had happened? Who were the women? Were they teachers? Villagers? Vigilantes? We decided to do a little cyber-sleuthing.

The Nigerian flag is green and white. The flag of neighbouring Benin is green, yellow and red but not all the bands run parallel. The colours also appear in Mali’s flag. Usually though they run vertically, not horizontally as they do in the football shirt. But a Google search for images of “Mali football jersey” produced photos of football shirts strikingly similar to that worn by the woman in the back row.

Two invaluable tools that we regularly use at Africa Check to establish the veracity of photos circulating online are Google’s image search function and the “reverse image search” engine, Tineye-com. (For more tips, check out our guide to spotting online fakes and hoaxes.) 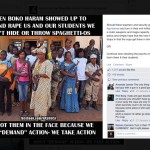 We uploaded the image to Google. The results weren’t encouraging. There were dozens of links to web pages, Facebook posts and tweets all claiming that the photograph showed armed Nigerian women who had fought off Boko Haram. None offered any details of where the picture had been taken and who had taken it.

In fact, the image had been so widely published in relation to Boko Haram that Google’s suggested search term after we uploaded it was “boko haram women”.

We changed the search term to “Mali” and hit enter.

The claim is a hoax

As it turns out, our hunch was correct. The photo was first published on 23 November, 2012 in The Times of London. It had been taken by a Times photographer, Jack Hill, in the town of Sevare in Mali and accompanied an article by one of the newspaper’s correspondents, Jerome Starkey, about “women bent on revenge against Tuareg rebels in Mali”.

The women – all members of the Ganda Koy militia, a pro-government paramilitary force – had vowed to avenge relatives they said had been killed or raped by Tuareg rebels belonging to the National Movement for the Liberation of Azawad (MNLA). Few, if any of the women, had seen combat when the photograph was taken.

The story of the Nigerian teachers standing up to Boko Haram militants is nothing more than a hoax.

A wrap of online fakes and hoaxes

There are numerous images circulating online that purport to show Boko Haram atrocities. Some are genuine. Many are not.

Earlier this month, the militant group attacked the towns of Doro Gowon and Baga in northern Nigeria. Eyewitnesses say hundreds were killed and satellite images obtained by human rights groups show that dozens of shops, houses and buildings were torched.

In the weeks since the attack, a series of graphic images have spread online as evidence of what has become known as the “Baga massacre”.

Here’s our wrap of the images we have fact-checked so far.

(WARNING: Some of the photographs in the links below are extremely graphic.)

One of the most disturbing photographs shows dozens of charred corpse lying in rows. However the image actually shows the aftermath of a fuel tanker explosion in the Democratic Republic of Congo in 2010.

Another ghastly image shows the burnt corpses of a mother and child. We have been unable to verify its exact origin, but searches on Google and the reverse image search engine, Tineye.com, show that the image has been circulating since at least 2010 and is therefore not from the recent Baga attacks. Given the condition of the bodies, they may have been victims of the fuel tanker explosion, but we cannot say for certain.

Yet another photograph attributed to the Baga massacre shows a crowd clustered around a mass grave. However, that image dates from a massacre near the Nigerian city of Jos in March 2010.

Then there is the image of a number of grotesquely mutilated corpses strewn across a road next to a bus. It was actually taken in 2010. According to a BBC report at the time, a series of photographs emerged after armed robbers attacked a bus on the Lagos-Benin highway. The victims had reportedly been made to lie down in the road and then the bus driver was ordered to run them over.

Even a Reuters photograph of a group of men lying face down outside a police station after their arrest in the city of Bauchi in northeastern Nigeria on 25 July 2009 has been passed off as evidence of the Baga massacres and has spread widely on the web and Twitter.

Another image that has gone viral on Twitter shows a pile of bloodied bodies lying in street. It is also not from Baga but was taken in July 2009 by an Associated Press photographer outside a police station in the town of Maiduguri after clashes between Nigerian troops and Islamist militants left hundreds dead.

Not all the hoaxes involve images of atrocities. A photograph of two men in camouflage uniform being chased by a zebra has been widely distributed as evidence of the Nigerian army’s cowardice. Trouble is, there are no zebras in the wild in Nigeria. It turns out that the photograph was actually taken by a Reuters photographer in Kenya on 30 July 2007. Two Kenya Wildlife Service rangers, working to help move 2,000 animals to the Meru National Park, had to make a run for it when a recalcitrant zebra charged them.

“Nigeria accounts for 25% of maternal, infant deaths in sub-Saharan Africa”