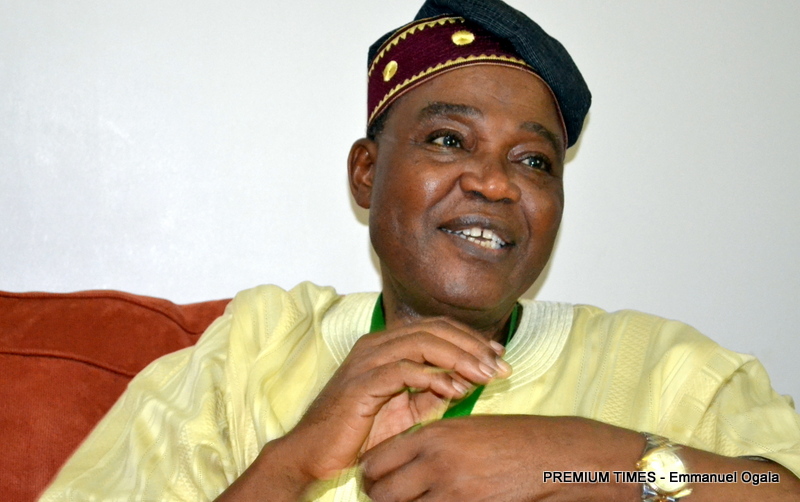 INTERVIEW: Why I’m healthy and happy at 70 — Ogunshola, ex-chairman, The Punch

Ajibola Ogunshola, well-regarded actuarist, statesman, respected Ibadan chief, astute businessman, renowned newspaperman and a member of the ongoing National Conference joins the club of the septuagenarians on Monday. He was born on July 14, 1944.

Although a trained actuarist, fate thrusted the leadership of one of the outstanding newspapers in Nigeria, The Punch, on him decades ago. He assumed the chairmanship of the newspaper following the death of his elder brother, Moyo Aboderin. Moyo had been chairman after the demise of their brother and founder of the newspaper, Olu Aboderin, in 1984.

Mr. Ogunshola ran the Punch Nigeria Limited, publishers of the Punch, Saturday Punch and Sunday Punch, meritoriously for about 25 years, transforming the company to perhaps Nigeria’s richest, best run and one of the most profitable media establishments in Nigeria, and even Africa. The paper too became clearly Nigeria’s best packaged, most read and one  of the most respected in Nigeria.

Mr. Ogunshola voluntarily retired as chairman of the company on April 30, 2011 but remains on its board.

While leading The Punch, his newspapering and administrative skills caught the attention of other proprietors, under the aegis of Newspaper Proprietors Association of Nigeria, NPAN, who chose him to lead the Association as President. While running NPAN, he tried to institute an Audit Bureau of Circulation for the newspaper industry as well as put in place an effective self-regulatory mechanism for the sector to cut down on the excessive ethical breaches besetting the Nigerian media. It is unclear whether those who succeeded him carried on with those reforms.

Mr. Ogunshola was a delegate to the 2005 National Political Reform Conference, NPRC, convoked by the Obasanjo administration. He is also attending the ongoing National Conference and is one of the very few delegates that cannot be accused of absenteeism or indolence.

Although retired, the father of four says he still works somehow.

“I know I am very busy because I wake up in the morning and go to my boys quarters to work. But one thing is sure I don’t work under pressure and I don’t stress myself,” he told the PREMIUM TIMES team, comprising Musikilu Mojeed, Festus Owete, Emmanuel Ogala and Amina Mohammed – in Abuja on  Monday.

He also talks about his journey on earth so far, his family, why he enjoys good health, his days in The Punch, the journalism profession and other issues.

Enjoy excerpt of the interview below.

I’m happy to be 70 because when we were young, being 70 was seen as a great achievement. It was considered that once you are 70 you have achieved something. My father died at 67. I had just finished high school certificate and was about to go into university when he died. We all saw him as an old man. So for me, being 70 and relatively in very good health, I am so happy about it.

My health has been good on the whole and that is primarily because a few years ago, I changed my diet and also started doing a lot of exercise. At this age, one will have one or two problems. Though I have little problems, I don’t call them problems because they are actually containable if I can stick to a certain kind of diets which don’t trouble my colon and try to not eat that which will give me cholesterol.

What kind of diet and excises do you have that has kept you in good health condition at 70?

The first thing is lots of exercise because even if you eat the right kinds of food and you don’t exercise you can still have problems. Fortunately the exercise you need is not something out of the blues. For instance, I swing my arms three or four times a week while I walk in the morning. I drink water at most half bottle slowly and it is appropriate to drink before the exercise or shortly after the exercise or before you eat. Most times I stand on my heels and stretch my arms.

As for the food, well at some point in time I had high cholesterol and my blood pressure was high about six years ago. So I had to watch what I eat. I had to stop eating meat and started eating more of fish and snail and then once in a while, chicken. I try as much as possible to eat varieties of fish so that in the long run I don’t get tired of taking fish. Now beans is another food I don’t joke with. I eat beans a lot and I don’t eat it with fish. Just beans. That’s because it provides protein. Though it has carbohydrate, sometimes I take the beans with garri on top. That is when I have tummy upset. My wife does not make the beans with red oil because what most people don’t know is that beans has its own fat in it already. So when you add oil again, that’s so much fat and fat makes people get old on time.

I stay away from eggs, but eat more of vegetables. And finally, there is no salt in my food. I have not taken salt in like five years now. I take salt only when I go for occasions and I have to eat outside. Aside from that, I don’t eat salt. As we all know, salt is the major cause of hypertension.

Out of all you mentioned in your diet you did not mention fruits, why is that?

Well, I have a delicate colon and so I can’t take fruits just the way you take it or the way I wish to take it. It sends me to the loo. So, I eat just little of it occasionally.

Do you take coffee or tea?

Well, when I am not disciplined I take coffee. In fact, I don’t drink it at all. And for tea, I take tea, but no milk no sugar.

Do you take alcohol and if yes what quantity do you take?

That is the problem I think I have. Yes, I take alcohol, but I don’t drink heavily. On the average, I take half a bottle of wine, which is about two medium size cup. And if my friends are around and my wife takes just half a glass, no matter how good the wine is, the rest is consumed by me and my friends.

What brand of alcohol do you take?

I take more of red wine, then occasionally Brandy and hardly take beer. I take it only when I am thirsty or if I come to visit you and I see chilled beer after coming in from hot sun.

Do you wish to keep away from alcohol?

Yes, I do.  In fact, sometimes in the past one, of my birthday resolutions was to keep away from alcohol. At times, I stay away from alcohol for like two three months, but then again I said to myself one is  going to die eventually anyway (laughs).

Did you stepped down as chairman of  The Punch or you retired entirely from the company?

Yes, I retired as the Chairman of the Punch precisely April 2011, that’s about 4years ago. But I remain on the board of the company. When I was chairman of Punch I don’t go to work every day. I just go there two to three times a week. But presently I have an office, which is the boys quarters at the back of my house. So I work within my house. I know I am very busy because I wake up in the morning and go to my boys quarters to work. But one thing is sure I don’t work under pressure and I don’t stress myself. I can’t give an account of what I do there but I know I work.

You had a company for your actuary business, does it still exist?

Do you feel fulfilled about your achievements in the past 70 years?

First and foremost, I am not an over-ambitious kind of person and so it’s not difficult for me to feel happy or fulfilled. I am ambitious, but not over-ambitious. So, basically I tend to assess many things statistically and therefore what is important for me is to look at my colleagues and rate what percentage I belong. Do I belong to the happy generation or less happy generations? If I belong to the much happy percentage group, which might be 95 percent happy generation, then what will I complain about or what other satisfaction do I search for? Meanwhile, happiness is a state of essential satisfaction. Whatever you achieve in life or whatever legacy you have, once you die that is it. Only a few people get remembered by anybody 100 years after their death.

Ayo Mi, The One That Brings Me Joy, By Femi Fani-Kayode

Fifteen minutes ride, 10 things you should know about the Lagos Blue Rail