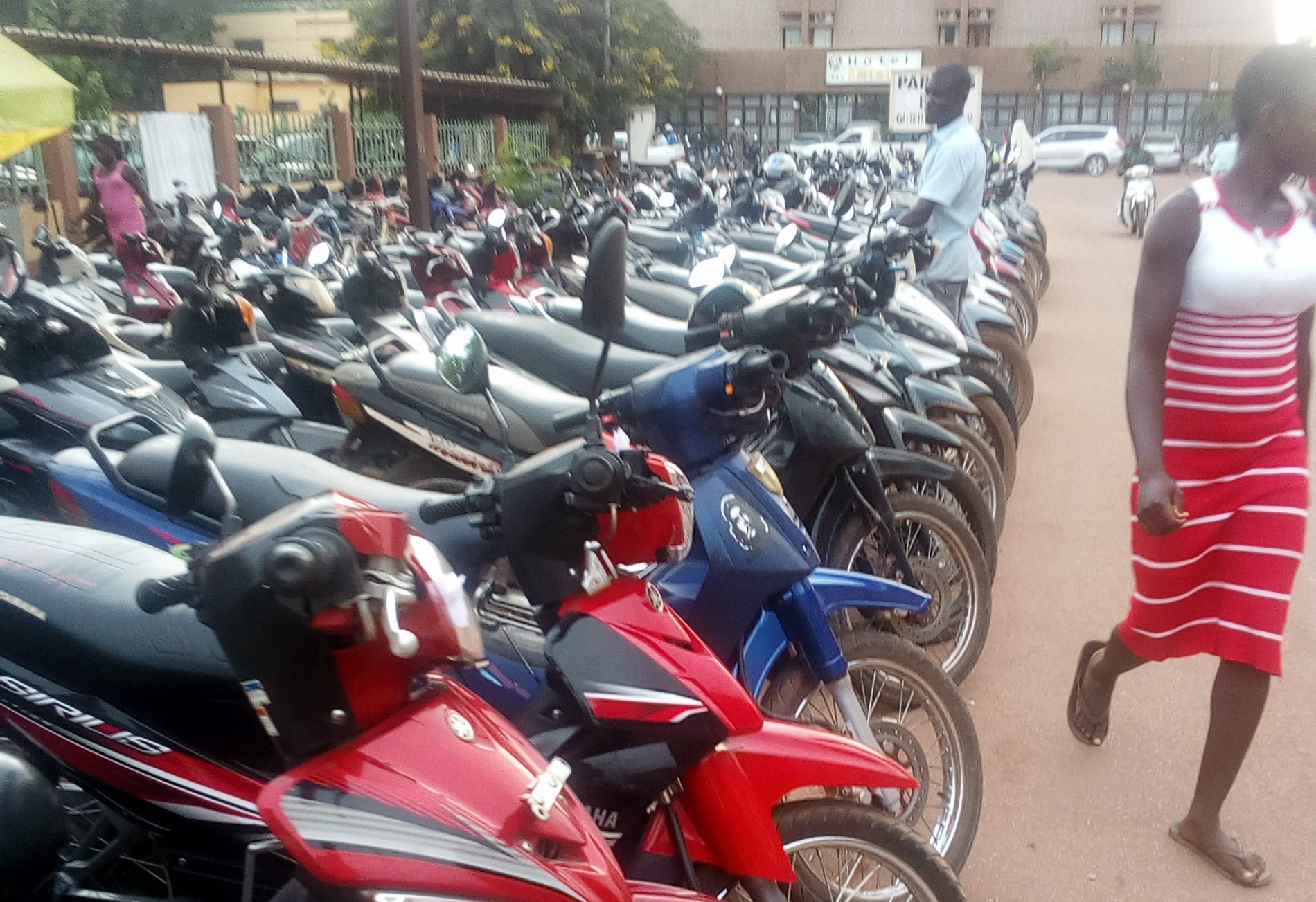 A walk or drive through the winding but well-paved streets of Ouagadougou, for a first-timer, would reveal one startling fact: the high number of females who zoom through with mopeds.

A moped is a type of small motorcycle with bicycle pedals, generally having a less stringent licencing requirement than full motorcycles or automobiles.

A moped is any low powered motorcycle with an engine capacity no greater than 50cc, and a max speed of 28mph. Not all mopeds are scooters, but the most common type of moped you will see on the road nowadays is likely to be a scooter.

Mopeds typically travel only a bit faster than bicycles on public roads and possess both a motorcycle engine and pedals for propulsion.

From smartly dressed younger women in biking shots or jean and tee-shirts to flamboyantly garbed older women, some with infants straddling their backs or front, to even the very elderly, these females dominate the streets of Ouaga.

It is safe to say that for every 10 mopeds passing a tourist on these highly guarded streets, eight are being ridden by women.

Many of the women riders exhibit a high level of dexterity while on these machines that is usually a sight to behold.

They all seem to be on a quick mission going by the stern expressions on their faces. A few exchange greetings in French as they stop at the numerous traffic light junctions dotting the city.

Separate lanes, from the regular ones for motorists, have been built for the hundreds of mopeds that travel through Ouaga streets daily.

There are about six means of mobility on these streets: the conventional usage of one’s feet, iron-cast ‘trolleys’, bicycles (also dominated by women), mopeds, donkeys and of course, cars. But it is safe to say the mopeds, mainly ridden by women outnumber these.

It is estimated by conventional standards that the large private vendor of motorcycles, JC Megamonde, sells over 50,000 scooters and mopeds every year to residents and tourists.

Ouagadougou’s residents also travel in green cabs, which take their passengers anywhere in town for 200 to 400 CFA. The price is higher at nights and could go as high as 1000 CFA for tourists.

Ouagadougou (shortened) is Burkina Faso’s largest city with a population of about 2.2 million. The city’s name is often shortened to Ouaga.

The inhabitants of the French colony are called Ouagalais.

Ouagadougou is an important commercial centre. It is a centre where goods are collected and directed to rural areas. With a large consumer base, large amounts of energy sources, raw materials for buildings, agricultural products and livestock products are imported to the city.

The economy is dominated by the informal sector, which is characterised by petty commodity production, and workers not necessarily having salaries. Traditional, informal trade is widespread and concentrated around markets and major roads, as well as in outlets in neighbourhoods. There are also instances of modern economic practices with workplaces having qualified, stable labour forces, or more traditional forms of business such as family businesses.

Tsandy, a female resident, who works as a comedian says women riders typically represent the ‘independent spirit’ of the women from those parts.

She also says the low economic power of the average Burkinabe is another prime reason residents (and women) opt for buying mopeds for transport.

A BBC profile on the country once described it as a poor country even by West African standards.

”Landlocked Burkina Faso has suffered from recurring droughts and military coups. Burkina Faso, which means “land of honest men”, has significant reserves of gold, but the country has faced domestic and external concern over the state of its economy and human rights,” the profile noted.

Tsandy said women in Ouaga ”fiercely independent economically and are daily on the streets fighting to empower themselves without relying on men for support”.

”Besides, to get a motorcycle here, you need an average of 600-700 CFA which is still affordable but you can’t get even a usued car for that amount. So, automatically, women and men go for motorcycles. More women than men use ‘motorcycles’ as means of transport,” she adds.

Perhaps due to the essential nature of owning a moped to navigate the city, the streets are dotted with merchants, who sell these exquisitely crafted machines.

Smartly dressed traffic wardens can also be sighted at virtually all street corners and traffic points carrying out the arduous task of ensuring seamless movement as hundreds of moped riders, donkeys, bicycles and of course taxis and private cars throng the streets of Ouaga.

So when you are in Ouaga next, you may want to carefully pick the mode of transport that suits you. And of course, watch out for the ubiquitous female moped riders that daily criss-cross ‘the land of honourable men’.